A Kauri Tree stump remains undead, which is changing the way scientists perceived the mechanisms of the Forests 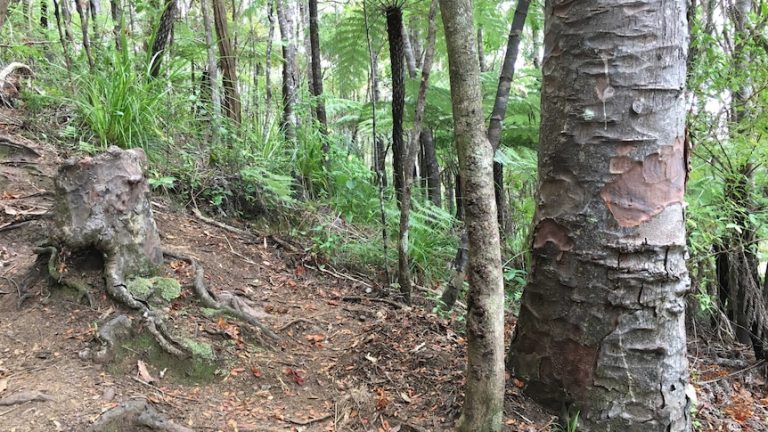 Do Plants always exist as single organisms and take part in a grand competition to survive alone individually in the Forest? Or do they connect with each other to form an alliance to survive and thrive together as a “Superorganism”? A living Kauri Tree stump in a New Zealand Forest suggests the latter.

Conventionally, scientists have believed that a Forest is a field of grand competition for resources, where each Plant waits to suck the resources from Another whenever possible. However, over time, with greater research, such rudimentary understanding is beginning to change, and many scientists now see the Whole Forest as one ‘Superorganism’.

In 2019, a living Kauri Tree stump was first discovered by Auckland University of Technology researchers Martin Bader and Sebastian Leuzinger when they were hiking in a Forest near Auckland. They noticed that even though the stump had no leaves or any parts of green foliage—which are necessary for performing life-giving photosynthesis and gas exchange, the stump was still alive even after the main body of the Tree was not there.

How is the stump is still alive?

Typically, without exceptions, Trees use a simple pressure mechanism to pull water and nutrients up through the xylem in their roots, through the trunk and branches, to their green foliage to complete the photosynthesis process. No Tree is known to grow without green foliage, or more specifically, no Tree can start life without green tissue containing chlorophyll. But some Trees, deprived of their trunk and foliage by diseases, lightning, or a lumberjack, can still possess an active complex root system and an above-ground stump to continue a zombie-like existence for years or even decades. Such arboreal undead have been recognized since 1833. However, surprisingly, until 2019, no living stump was subject to detailed scientific examination.

To understand what was happening in that Kauri Tree stump, Martin Bader and Sebastian Leuzinger put sensors on the stump and three other nearby Trees to measure sap flows under different conditions. They found that the Trees were transpiring on sunny days, but there was no movement of water through the stump next to them. Instead, during the night or on rainy days, when activity in the other Trees was low, water movement peaked in the stump. The movement could only be possible through changes in pressure in its roots. According to Bader, the lead author of this study, this is a piece of strong evidence that the water system of the roots is ever-connected.

Based on this finding, they determined that the stump’s roots had grafted together with the roots of those nearby Trees, which allows the stump to receive nutrients and water from them. From the stump in its present state, there is not much to offer to the other Trees; it is assumed that its roots were likely grafted when it was still a full-grown Tree. By the time that Tree fell down, what remained of the Tree had already been “grandfathered in” to the root network of the Forest which had kept the stump alive.

According to the authors, a living Tree stump is clearly a biological abnormality, and the key question here is why would such root grafts form?

Why keep a stump alive?

If these root grafts had been in place earlier, while the stump was still a full-grown Tree, it could be assumed that the root grafting is one of the normal rules of the Forest rather than the exception, at least among the same species. But what could be the evolutionary advantage here? And why are the connections maintained when a leafless stump is no longer actively contributing resources? Scientists still do not know the answers to these questions. The root grafting phenomenon is well-known to gardeners and Foresters, and has barely been studied on a physiological basis, and much of what is known is based on speculation.

The authors of the study have suggested a few evolutionary advantages for root grafting, including increased resistance to windthrow, kin selection by helping the weak, and increased access to water and nutrients coupled with the ability to shift those resources among the Trees. The first two are more easily explained, as all graft members benefit from this connection, but the last one is still not well-understood by the scientists.

Forest as a ‘Superorganism’

Suzanne Simard, an American Forest ecologist, has shown that Trees send each other signals through a web of Fungi buried among their roots. This underground communication includes the transfer of nutrients and resources to neighboring Trees before they die, warning signals about environmental changes, and many other necessary chemicals. This Forest features interconnected root networks where nutrients, water, and carbon are exchanged, representing power, water, and gas grids supplying systems of a city.

But what mechanisms decide who gives and who takes in this interconnected system? There is strong evidence that shaded Trees are supported and maintained by non-shaded Trees, and the fact that stumps are still supplied with resources indicates the much bigger idea that Forest acts, survives, and thrives as a whole. A superorganism that regulates based on the mechanisms of symbiosis.

According to the authors of the study, considering a Forest as a Superorganism is a game-changer for a general understanding of how Forest functions. It is shifting the perspective of the scientific world toward the Forest ecosystem as a Superorganism.

If within a Forest, Trees are connected with each other and sharing resources, they also share the same risk related to pathogens, which can destroy the whole Forest by spreading rapidly. But that does not usually happen, which indicates more complex mechanisms that govern the Forest as a ‘Superorganism’. And among many other natural mysteries, how Forests function is still not a well-studied area which suggests more research is required to understand the mechanisms of the Forest.