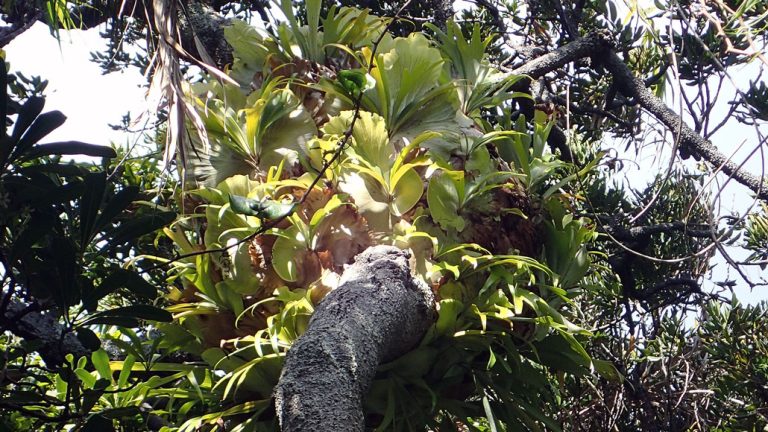 Much research has been conducted, and still, much research is ongoing on how Plants communicate with each other to survive and thrive and how all Plants within a Forest collectively act as a Superorganism. Many researches have shed light on how Plants recognize their own offspring and actively help them with resources. Recently in July 2021, a group of researchers from the University of Wellington, New Zealand, has shown how a specific species of epiphytes, Fern, identified as the first Plants known to work and serve each other as ants do.

Epiphytes are Plants that grow on other Plants. The word epiphyte comes from the Greek “epi,” which means “upon” and “phyton,” which means Plant. One of the amazing evolutionary adaptations of epiphytes is their ability to attach to vertical surfaces and capture their necessary water and much of their nutrient from sources other than soil.

They may be found on branches, trunks of a Tree. While epiphytes may live on other Plants, they are not parasites. There are many types of epiphytes, with the majority being found in tropical and cloud Forests. They get their moisture from collecting rainwater and the air, but some even live in desert terrain and gather moisture from fog.

One species of epiphytes known as staghorn Fern (Platycerium bifurcatum) caught the attention of Kevin Burns, who is a biologist at Victoria University of Wellington. This mysterious Plant is native to parts of mainland Indonesia and Australia too.

Staghorn Ferns are popular houseplants, sporting long, antler-like fronds that poke out from a brown, tissue-papery base. They may also be the first known example of a Plant that exhibits a type of social organization—that is, the first Plant thought to be eusocial.

According to experts, eusociality is the highest level of organization of sociality. Eusocial has been used to describe certain societies of insects and crustaceans, along with two species of mole rats. The following characteristics define this society:

The division of labour creates specialized behavioural groups within an animal society, which are sometimes referred to as ‘castes’.

Eusociality is distinguished from all other social systems because individuals of at least one caste usually lose the ability to perform at least one behaviour characteristic of individuals in another caste.

Staghorn Fern is a mass of strange Ferns that grips a trunk high among the Treetops. They look like green antlers, a giant tangle of floppy. Below their fork-shaped fronds and closer into the core of this lush knot of greenery are brown, disc-shaped Plants. These, too, are Ferns. They are even the same species. Together these individuals form a society.

While working on Lord Howe, an isolated island between New Zealand and Australia, Kevin Burns first noticed this strange epiphyte. According to Burns, these Ferns never occurred alone, and some of the larger clusters were massive. They create a nest where contain hundreds of individuals. After deep observation, Burns suspected that maybe each one of those individuals was doing a different thing.

The Fern colonies on the Tree trunk seemed like an upside-down umbrella. Some with long, green, waxy “strap” fronds appeared to direct rainwater to the centre of the clump. There, spongy disc-shaped, brown “nest” fronds soaked up this moisture. The whole community reminded Burns of a termite mound. Those mounds house a communal store of resources. Inside it, various members of the termite colony perform different tasks.

Burns and his research team soon started to examine these complex Ferns colonies on that island, and their collected data indicate that these Ferns colonies are individually a eusocial structure. These Ferns appear to form a complex society made up of interdependent groups.

Ferns reproduce via spores. These forms are on the underside of leaf-like fronds. Some four in every ten fronds of the studied communities of staghorn Ferns could not reproduce. They mostly served as nests for others. Another Fern has what’s known as “strap” fronds. It did develop fertile spores. This suggests a division of labour between fronds that do and do not form nests.

Their research also showed that nest fronds sop up more water than strap fronds do. Earlier work by other scientists had found networks of roots running throughout the colony. Using them, nest fronds can share their water, slaking the thirst of neighbouring strap fronds.

Burns and his research team also analyzed the genes in 10 staghorn colonies on Lord Howe Island. Eight hosted genetically identical individuals. Only two colonies contained individuals whose genetics differed. Such a high degree of genetic relatedness is seen in colonies of eusocial insects. In ants and bees, for instance, many sisters contribute to the survival of their home nest.

The research team concluded that the Staghorns’ newly discovered traits tick many of the boxes needed to support the claim that they are eusocial. Previously scientists had largely assumed that eusocial colonies coordinate the behaviours of their members to meet the colony’s joint needs. Tasks would seem to be intentional and require thought. But after observing eusocial Plants, Burns said that this type of transition in the evolution of complexity does not require a central brain.

According to Burns, the division of labour to build and collect communal resources appears to be a key feature that sets Staghorn apart from other colonial Plants. A stressful life in the Treetops, far from the soil, may have served the Ferns’ evolve eusocial traits. The society these Plants create allows all members to share scarce supply of water and nutrients.

Burns expressed his excitement to discover something in the wild that unexpectedly turns out to be comparable to some of the most advanced and complicated societies in the living world that evolved naturally. And regardless of how eusocial the Ferns are, they still have intriguing similarities and differences from caste-forming animals. He further hoped that learning more about these Ferns would improve their theories on why these characteristics have evolved across the diversity of life.