Are Fungi really the ‘ancient forefathers’ of all life on planet? 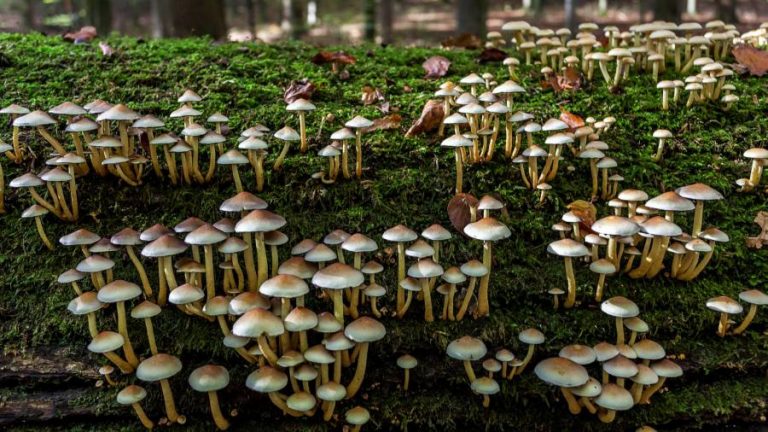 Fungi cannot be defined exactly as animals, nor Plants; rather Fungi live in the most subtle way yet affect everything around them so profoundly that it is impossible to overestimate the importance of Fungi—rather easy to understate how little the scientific world knows about the world of the Fungi

Planet Earth teems with Fungi – from Forests, grasslands, deserts, lakeshores, to puddles, on the ocean floor, between cracks in the stone, on mountain peaks, in all climates and on every continent, the Fungi dominates. Not too unsurprisingly, the largest living organism on earth is a Fungus, in the Malheur National Forest, Oregon, USA, occupying a total area of 965 hectares (2,385 acres), which is equivalent to 1,350 soccer fields, and is estimated to be 1,900 to 8,650 years old! Makes you question most fundamental assumptions about life, doesn’t it?

The subtle ways the Fungi live with such profound importance in sustaining lives on Earth is the indication that Fungi had cultivated every layer of consciousness through sustaining various forms of life. From assisting Plants to colonize terrestrial Earth to treating diseases in humans, there is nothing, it seems, the Fungi is not capable of!

It is the Fungi which has made life possible on a previously barren planet. The Fungi are the true chemists capable of dissolving anything. The Fungi generated modern soil by eating rocks which later allowed Plants to colonize the land, and eventually changed the climate, starting the evolution of the animal kingdom. Scientists have discovered that Fungi brought life back on earth after the last mass-extinction event and even paved the way for civilization to thrive – in other words, they have brought about the evolution and sustenance of humankind.

Until now, without any controversy, the oldest confirmed Fungal fossils are dated to be around 450 million years old- around the same time when Plants are estimated to have started to migrate from water to land. Scientists, after re-examining the Fungal molecular clock using DNA-based methods, are of the opinion that the Fungi on land may have evolved 760 million to 1.06 billion years ago. Extracted from Arctic Canadian shales, the recently discovered billion-year-old fossilized Fungal Hyphae (long thin tubes) and spores fill the gap in the fossil record and imply that Fungi may have occupied land well before Plants. So, before forming a symbiotic relationship with Plants, Fungi had millions of years to master the art of surviving. And during the process, the Fungi had figured out the most optimal way to survive the longest is through a symbiotic relationship.

Steeve Bonneville, a researcher at Université libre de Bruxelles, Belgium, examined a fossil for a decade from a piece of shale found in the Democratic Republic of the Congo which dates to between 715 and 810 million years ago. According to him, when this weft of Fungi lived in the Neoproterozoic era, the land was relatively empty, likely containing only bacteria which perhaps coating the ground in biofilms. Land Plants did not even come onto the scene. Around this period, these ancient Fungi likely lived in sediment and fed on decaying organic matter.

He mentioned that the Fungi, maybe even at this early date, was behaving symbiotically with photosynthetic bacteria and further explained that if someone put Fungi and green algae together in liquid, after a couple of weeks, they will form some kind of cooperative relationship together.

Fungi – driving all evolution on land?

From their ancient origin now, it is almost clear that Fungi have played a crucial role in shaping Earth’s terrestrial livable biosphere over the last billion years. According to the experts, in the Late Ordovician era, which is around 500 million years ago, Fungi formed a symbiotic relationship with the earliest Pant Liverworts. Lacking roots, these earliest Plants relied completely on their Fungal partners to grow inside them and spread outwards into the primordial mineral soil. Fungal hyphae would produce organic acids to dissolve rocks and extract nutrients that were held within; this process is known as biological weathering. In return, the Plants would transmit nutrients produced through photosynthesis to the Fungi.

This ancient symbiotic relationship ultimately powered the growth, evolution, and diversification of Planet Earth’s flora into ever more complex species, communities, and ecosystems, which remains the norm today. Even now over 90% of land-based Plants rely on some sort of symbiotic relationship with the Fungi – with some entirely depending on Fungal assistance.

So, by the biological weathering process, Fungi directly helped Plants move away from being marginal tiny little green things on the water’s edge into large Forests and whole ecosystems.

Without the decomposing ability of the Fungi, life on this Planet is impossible to even imagine. All life in the Forests would soon be buried under a mountain of dead Plant matter without help from the Fungi – the master decomposers of the natural world. Previously it used to be thought that Plants made the transition to terrestrial life simultaneously with aquatic Fungi partners, however, new discoveries from the Arctic Canadian shales have opened up the possibility that Earth’s barren lands may have been already being organized for successful Plantlife for hundreds of millions of years.

Now it is a well-known fact that Fungi were remarkably important in converting drylands into fertile carbon-rich soil. In the prehistoric period, by dissolving mineral-rich rocks and producing carbon-based organic acids, the Fungi had prepared a thriving atmosphere for Plants. According to some experts, it could be that emergence of Plantlife was only made possible by the aeon of groundwork accomplished or laid out by the ancient Fungi forefathers who break down organic matters and release nutrients back to the soil, which is then made available for Plants to continue growing. This is how lives continue and thrive on Planet Earth and the entire web of life is connected through the networks of everyone’s ancestor, the Great Fungi, eating the dead and bringing about ‘new life’, regulating the cycle of life and death of organisms on the Planet Earth.

Scientists have described only over a hundred thousand different species while estimating that there may be as many as over 3.8 million species of Fungi on earth. This is the indication that the scientific world is only starting to scrape the surface of how varied forms of the Fungi are out there and what humanity can learn from the Fungi.

According to Katie Field, an associate Professor in Plant-Soil Processes, the University of Leeds, currently, the outstanding challenge for scientists is to resolve with certainty whether the ancient Fungi were terrestrial in origin. She further explained that with the focus now on finding further fossil Fungi, the scientific world’s understanding of the evolution of the early prehistoric biosphere would make progress in leaps and bounds.

For now, what is already clear is that without the symbiotic ability of Fungi, humanity and the modern world would not exist. Fungi also play a vital role in the maintenance of healthy ecosystems across the Planet; from tropical Rainforests to Antarctic deserts, Fungi are the foundation of all life forms on Earth today.