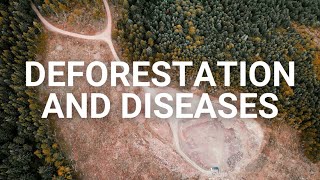 According to the experts, over the past few years, the conversation over disease has exponentially increased. Consider the Zika virus, preceded by the Ebola epidemic, succeeded by the new COVID19 super virus which has led to a global shut down.

For the past few years, scientists have researched and developed vaccines, medications, and treatments to help humanity increase lifespan. However, the battle has become a constant back and forth, as these diseases evolve as well as learn to combat the treatments. This has led many to look for preventive solutions.

After numerous rigorous investigations and studies, a shocking but all too familiar foe that seems to have been one of the major causes of the exponential growth and spread of certain diseases is deforestation. The cutting down of Trees to create more vibrant urban landscapes might have temporarily improved human life, but scientists have marked this activity as a massive influence on disease dynamics.

According to Amy Vittor, an epidemiologist at the University of Florida’s Emerging Pathogens Institute, deforestation is creating a great disturbance among the natural habitat; the more we will disturb them, the more we are shaking the pot. With a range of diseases, the links are becoming clear that disturbance leads to downstream emergence events in humans, she explained.

For society to thrive, it must first survive. At this point, it is a well-known fact that deforestation has played an immense role in the change of global climate. The increase in natural disasters like landslides and unpredictable weather patterns, and now, it is a proven fact that Trees protect and cultivate ecosystems to survive diseases. It is no understatement to consider that the protective layer of our ecosystem has slowly and methodically been eroded over several lifetimes of unregulated development.

Possibly in the most significant and most impactful way, Forests and parks have been crucial for our society’s respiratory functions. Not only do they help regulate and cycle the emission and circulation of oxygen and carbon dioxide, but also plays an essential part in keeping harmful microbiomes and gases in the atmosphere in balance. Recent studies have shown that Trees cultivate a diversity of healthy microbiomes, which boost the human immune system and keep the animal kingdom of the area healthy.

When a malaria outbreak exploded in Malaysian island Borneo in 2002, researchers were surprised to find that the culprit was not Plasmodium malariae, the main mosquito-borne parasite known to infect humans in the area. Instead, the parasite’s DNA turned out to stem from P. knowlesi, typically known as “monkey malaria”, which is specialized to infect and flourish in Forest-dwelling macaques. A few accidental cases had been recorded in people over the years, but such an outbreak was unusual. And it did not stop there, P. knowlesi has since become the most common cause of malaria in Malaysia, and human infections are steadily rising throughout Southeast Asia.

One of the most lethal developments of a novel virus was one that began just before the beginning of the new era. The Nipah virus has continued to ravage Southeast Asia with its death toll in the thousands. This novel virus developed when fruit bats from Indonesia relocated to Malaysia in a bid to escape the smoke generated from the burning away of their native Forests. The region began to report pigs and humans falling sick from the new disease. With no vaccine or treatment, the Nipah virus continues to pose a threat in that region.

Malaria in Malaysia and Nipah virus are just a few examples of how diseases that were previously confined to animals are now exploding into human settlements as deforestation increases.

The obvious and undeniable link

One of the most well-documented links between the spread of infectious diseases and deforestation is the case of malaria. While the disease has been effectively curtailed in Brazil to its lowest figures in 1960, the disease has seen a resurgence in recent decades. Extensive studies by epidemiologist Amy Vittor suggested that deforestation of the Amazon created habitats along the edge of the Forest twitch was ideal for the Anopheles mosquito, which carries and transmits malaria.

A data study by Andy MacDonald, a disease ecologist, and Erin Mordecai later confirmed this theory. Their study was published in the Proceedings of the National Academy of Sciences and is widely accepted by the broad scientific community. According to the study, every 10% increase in deforestation results in a 3% increase in malaria cases. This type of link between the data types is also observed in Sabah, which is part of the Malaysian Borneo Forest.

According to scientists, there are many new diseases such as Zika, dengue, and chikungunya, which are vector-borne diseases currently affecting human populations that have their origins in Forests. All of these were probably primarily contained in Forest settings within a very limited zoonotic cycle but now affecting human areas on a large scale.

Understanding how deforestation may lead to zoonotic disease outbreaks in humans will help develop better strategies to prevent them, and most importantly, it may help us predict future disease outbreaks. Some efforts towards this goal are underway; for instance, EcoHealth Alliance, a New York-based nonprofit that studies infectious diseases, has several projects to track the spread of wildlife-borne diseases in places where humans have intruded into, often the untouched areas of Forests.