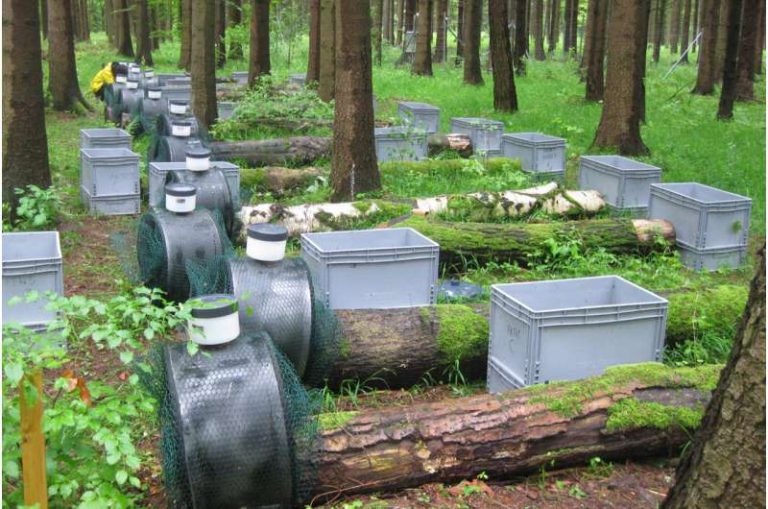 Fungi are the ancient decomposers of Planet Earth. Breaking down biological materials into the molecule is what they are good at. For millions of years, they have been silently contributing to the nutrient cycle of Planet Earth, which directly sustains the complex life forms and regulates the lifecycle of organisms. Fungi play a number of ecological roles in Forest ecosystems which affect the health, diversity, productivity, and development of their biotic communities.

Although Fungi are vital to Forest ecology, very little research has been administered to date on Fungi which thrive on dead Trees. From breaking down dead wood to completing the elemental cycle between Plants and soil, Fungi are the heart of a Forest. In 2018, a research team from Helmholtz Centre for Environmental Research—UFZ discovered that the number of Fungi species inhabiting dead Trees is 12 times higher than has been previously thought.

Fungi associated with down deadwood are saprobic, meaning that they derive nutrients from decaying organic material. One such common species in the Pacific Northwest is orange jelly (Dacrymyces Chrysospermus), found on decaying logs of Douglas-fir (Pseudotsuga Menziesii). Fungi found in decaying wood, litter, and duff serve to recycle nutrients, particularly nitrogen and carbon, as well as minerals, which other organisms can then use. Such decomposition processes also serve to physically and chemically break down soil organic matter and alter soil structure. In coarse dead wood, Fungi help to mobilize nitrogen, phosphorus, and potassium during the early stages of decaying.

In studying the role of the Fungi in the decomposition of oak stumps, van der Wal and his research team in 2015 reported finding unique fungal communities in freshly cut Trees and in younger stumps and noted that old stumps harboured more random assortments of fungal species. They also found that Ascomycete Fungi likely play a prominent role in wood decay but stated that further testing is needed and that a better understanding of the Fungal roles in wood decay can help improve estimates of carbon sequestration in Forests.

Breaking down wood is not an easy task because wood is very resilient, held together by a biopolymer known as lignin, which, together with hemicellulose and cellulose, form the cell wall of woody Plants and give the wood its strong stability. Fungi are able to break down the flexible cellulose fibres and the robust lignin by releasing enzymes that cause the polymers to degrade and become mineralized. As part of the ecosystem’s cycle, the leftover material becomes part of the humus layer, giving the soil stability and creating the substrate for a new generation of Trees.

They returned to examine what kind of Fungi communities had naturally established themselves in the trunks three years later. According to Dr. Witoon Purahong, a soil ecologist based at UFZ in Halle and the study’s lead author, the results were astonishing; the diversity of Fungi living in the Trees was an order of magnitude greater than previously assumed.

The researchers identified between 22 and 42 Operational Taxonomic Units (OTUs) per dead trunk. OTU is a scientific term accepted by molecular biologists to describe organisms that can be associated with individual species due to their DNA but do not already have a species name of their own.

From all the selected sites, the UFZ research team identified 1,254 OTUs in the dead trunks. In previous studies, researchers found just 97 Fungi species living on the same logs – about 12 times lesser than the UFZ scientists have now found. From their observation, dead conifers generally had greater species diversity of Fungi than most deciduous Trees. The greatest diversity was observed on Douglas fir, Larch, and Oak, and the smallest amount of diversity on Beech and Hornbeam.

According to Dr. Purahong, the reason why the research team found so many different species of Fungi lies in the modern molecular technique they had used. The lead author further explained that they used a modern DNA sequencing technology known as next-generation sequencing to discover DNA markers of the Fungi hidden in the wood. In previous, similar research, only the fruiting bodies of the Fungi growing on the surface of the dead Trees were identified. This gave rise to the misleading impression that only a small number of fungus species inhabit dead Trees.

The UFZ soil specialists also discovered that wood-inhabiting Fungi favor certain species of Trees and do not simply have a general preference for either deciduous or conifers Trees, as the researchers previously assumed. They discovered seven such distinguished Fungal communities on deciduous Trees and two on coniferous species. For example, Oak and Ash each shelter very specific communities of Fungi species whose composition is very different from those found on other deciduous Trees. In the case of the conifers, the Fungi growing in dead Scots pine were clearly distinct from those found in the other coniferous species investigated. It is not yet clear why there are such imprinted differences between the Fungi communities in different species of deadwood.

According to Dr. Purahong, the millions of years of coevolution between Plants and wood-inhabiting Fungi could provide an explanation for their coexistence – just like it is observed with symbiotic Fungi. However, what is more fascinating is that in some cases, the specialization of Fungi on dead wood is greater than the one of symbiotic Fungi on living Plants. The coexistence of communities of Fungi, bacteria, and other invertebrates living in deadwood could also account for specific colonization strategies.

These research findings are broadening the understanding of biodiversity. This is significant not only because it will enable scientists to improve the security of wood-inhabiting Fungi, which may be threatened by the extension of Forest monocultures. It is also important because the Fungi that grow in deadwood include species already known as Plant pathogens, soil-dwellers, or symbiosis partners, which appear to use deadwood as a temporary habitat.