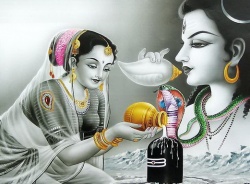 According to Ancient Indian Sacred Scriptures like the Rig Veda, the drink ‘Soma’ is the Drink of the Gods, which provided immortality. It was said in the Rig Vedas, that “We drank Soma, We became immortals, We came to the light, We found Gods”. However, the texts or the scriptures do not specifically mention the exact ingredients in the Soma drink.

The meaning of the word “Soma” in Sanskrit is ‘that which is pressed’, which is Avestan is pronounced “Haoma”.

Over the years, researchers, explorers have been in search of the drink Soma, mentioned in the Sacred scriptures, and some researchers, like Matthew Clark of University of London, has convincingly postulated that the Holy Soma Medicine could have been prepared from various ingredients at different times, depending on the availability of the ingredients in the region, similar to how the Holy Medicine of the Holy and Divine Mother Ayahuasca is prepared in the Amazons, sufficient to provide Entheogenic effect.

There are a few Plants which were named ‘Soma’ by local people like Ephedra, Syrian Rue, and Cannabis. If Soma/Haoma was actually prepared by various ingredients, these propositions could be correct. Matthew Clark, research associate under University of London, posits in his book The Tawny One, “I suggest that Soma was, in most instances, a mixture of Plants that was always sufficiently potent to produce an Entheogenic trip; that’s the reasons for the superlative praise and adoration for its deific and salvic properties.” He says that since various Plants were mixed to prepare the Holy Medicine Soma, that is how so many Plants were referred as “Soma / Haoma”.

It can be presumed, says Matthew Clark, that some Plants which were referred to as Soma has once been an ingredient for preparation of the Holy Medicine Soma, or has been misidentified by regional people. However, researchers, over the years, have proposed Plants which could be the Holy Soma Medicine, which are Psychoactive, however, which were NOT referred to as “Soma” by local people, and therefore could be counted as evidence against such proposition, says Matthew.

So what could be the Holy Soma Medicine

It could be that the Holy Soma Medicine, as so named in ancient Asia, could have depended on Holy Plant mixtures as the Holy Medicine of the Holy and Divine Mother Ayahuasca, which has been prepared with mix of various Plants with the Holy Banisteriopsis Caapi Vine, with over 100 additives.

In Asia Ephedra stalks or other Plants containing Ephedrine may have been added to an Ayahuasca analogue. Therefore, it seems very possible that the Holy Soma Medicine has been prepared over various admixtures from many Plants, Matthew Clark asserts, and that if Soma/Haoma was any single Plant it was supposed to have been found already.

The Rig Veda has also hinted multiplicity of the Holy Soma / Haoma Medicine. For example in Rgveda (9.65.23): “May the Somas) which are in Arjika, Krtva or in the middle of rivers (or homesteads), or among the five peoples (be beneficial to us)”.

The Vedas also provided some references which suggest multiplicity of Plant mixtures in the Holy Soma / Haoma Medicine, such as.

LEONTI and CASU (2014) found in the so-called ‘Bower Manuscript’ – an ancient book written in birch-bark leaves in ungrammatical Sanskrit, which was discovered by Lt. Hamilton Bower in 1890s, which discusses recipes of elixirs, one of which is for ‘amrta’ (immortality) , and ‘amrta’ oil. While detailing dozens of Plant ingredients for the two ‘amrta’ portions, there are botanical details and chemistry of six kinds of Plants, which are native to South Asia with Psychoactive properties:-

In many of the Plant ingredients, no or scarce phytochemical and pharmacological information exists.

The Bower Manuscript and the recipes for ‘Amrta’ demonstrates that even 1,500 years ago in ancient India there was sufficient Medicinal knowledge to combine Plants containing MAOI and DMT into an Entheogenic Medicine, a possible analogue version of the Holy and Divine Mother Ayahuasca.

LEONTI and CASU posits that considering both qualitative and phytochemical profiles of the Plants discussed, a Psychoactive Medicine would be possible to be prepared with following combinations:

LEONTI and CASU remarked that there are Plants in the ‘Amrta’ recipe in Bower’s Manuscript which are yet to be identified with Psychoactive properties.

Therefore, this can be concluded that Psychoactive Medicine with similar ingredients to the Holy Medicine of the Holy and Divine Mother Ayahuasca may have been possible to be prepared in India.