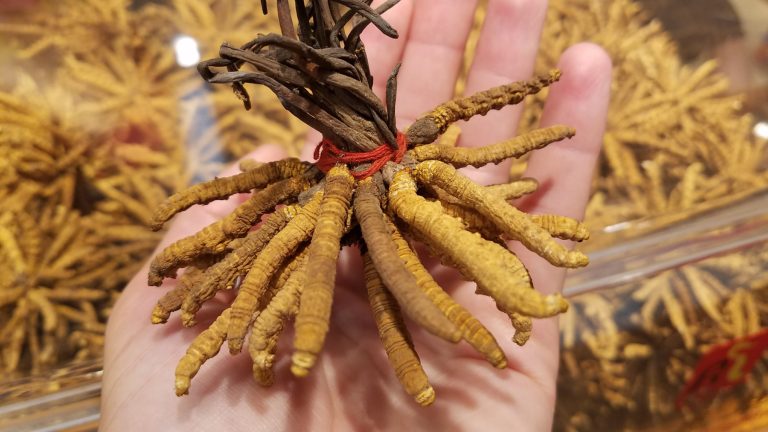 Recently an experimental cancer drug derived from a molecule first discovered in a Himalayan Fungus known as “Caterpillar Fungus” has been showing early promise as a new treatment for patients with advanced tumours in the first clinical trial, and the second clinical trial is already on the way.

Researchers at the University of Oxford developed the new chemotherapy variety named NUC-7738 with the association of UK-based biopharmaceutical company NuCana. This variety of chemotherapy is made from a compound known as Cordycepin, first found in a parasitic Fungus species called Ophiocordyceps Sinensis, commonly known as “Caterpillar Fungus”.

Ophiocordyceps Sinensis—the Caterpillar Fungus, mainly found in the meadows above 3,500 meters on Tibetan Plateau in the Himalayan regions of Nepal and Bhutan, is currently the world’s most valuable parasite. Normally it parasitizes the larvae of the ghost moth and produces a fruiting body that was valued as a herbal remedy.

In Tibet, locally it is known as Yartsa Gunbu, or “summer grass, winter worm,” which has been used in traditional medicine throughout the Himalayan region and in China for centuries to treat ailments ranging from cancer and kidney disease to inflammation and ageing.

In more recent years, it has gained the nicknames “Himalayan Viagra” and “Himalayan gold”, as the demand for its medicinal usages has risen so sharply that in Beijing, it is now worth three times its weight in gold. In Bhutan, where the Fungus is harvested, it accounts for a significant slice of the gross domestic product.

In summer, while buried underground and feeding on Plant roots, the Fungus first infects the caterpillars and slowly, while consuming them, it grows through their bodies in the fall and winter. Once the overlying snow melts away in the spring, the Fungus forces its almost-dead hosts toward the surface and then grows a dark-brown, spore-filled stalk through their heads.

Initial findings and the first trial

Naturally occurring Cordycepin, also known as 3′-deoxyadenosine or (3′-dA), is a nucleoside analogue. For a long time, it was reported to offer a range of anti-oxidant, anti-cancer, and anti-inflammatory effects, which explain why it has been used as a medicinal herb for centuries.

Though the compound has many other successful usages, when it was first used as an anti-cancer agent in the human body the researchers observed that it was broken down quickly by adenosine deaminase (ADA) in the bloodstream-with a half-life of 1.6 minutes in plasma. It also showed poor uptake into cells, which greatly decreased the potency against tumour cells in the body. To amplify the naturally occurring Cordycepin’s potential, the research team designed NUC-7738 with a number of engineered advantages, which let it enter cells independently without using Human Equilibrative Nucleoside Transporter 1 (hENT1). The research team also engineered other tweaks to the molecule and made it pre-activated to be resistant to breaking down in the bloodstream. According to the latest study on NUC-7738, these changes made the drug candidate’s anti-cancer properties up to 40 times more potent than Cordycepin when tested against a range of human cancer cell lines.

Moreover, the initial results from the first-in-human clinical trial of NUC-7738 appear to be positive so far. In 2019, the Phase 1 trial began and is still ongoing. This trial consisted of, so far, 28 patients with advanced tumours that were resistant to conventional pharmaceutical treatment. So far, weekly escalating doses of NUC-7738 provided to this group have been well tolerated by the examined patients. The research team observed encouraging signs of anti-tumour activity and prolonged disease stabilization.

The authors of the study concluded that these findings give clear proof of concept that NUC-7738 synthesized from Cordycepin, overcame the cancer resistance mechanisms that previously limited the activity of 3′-dA and supported the further clinical evaluation of NUC-7738 as a novel cancer treatment. The research team is currently planning for Phase-2 of the trial to be undertaken after the safety of the novel drug has been more thoroughly demonstrated and the recommended regimen for Phase 2 patients has been identified.