Fungi manipulates their own genes to cooperate with Plants 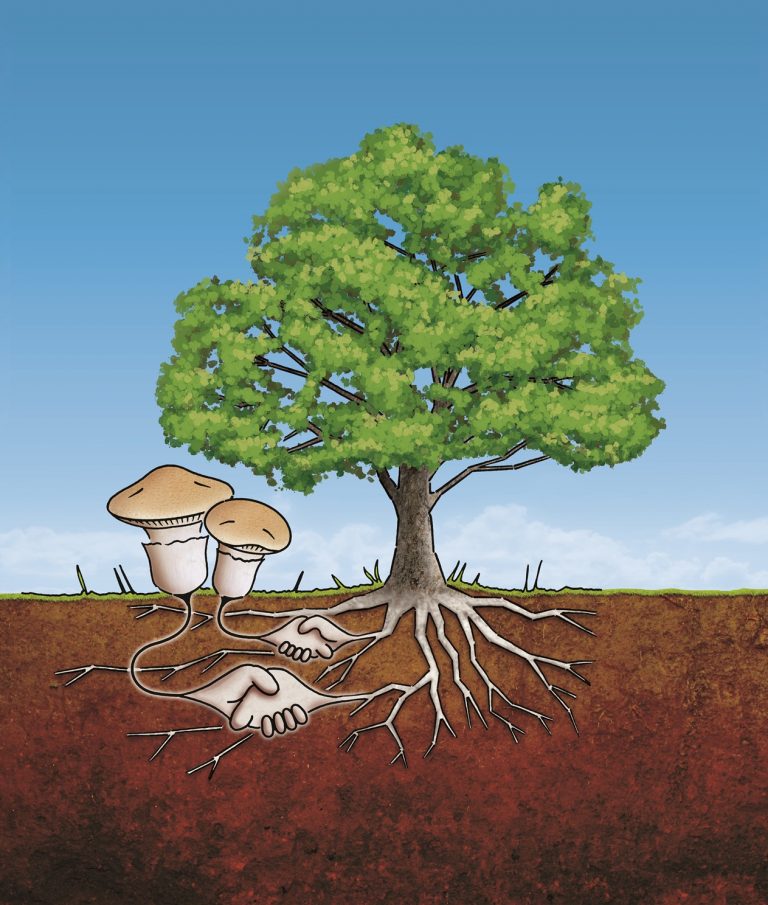 Fungi— the ancient architect, sustainer of life is the symbiosis master of Planet Earth. What is symbiosis? Symbiosis is one of the universal phenomena which enable diversified entities to live harmoniously. From a macroscopic to microscopic view, symbiosis is the basis of creation to express harmony.

Symbiosis not only enables organisms and lives to exist and survive but also thrive and express diversified authenticity of creation to the fullest. Symbiosis is the manifested mechanism of Unification. Symbiosis is Universal wisdom in action. And Fungi are the masters of this wisdom on Planet Earth, and known to be the earliest.

Before Plants conquered land, the Fungi had millions of years of headstart to master the art of survival on land and figured out that symbiosis is the most optimal way to express the diversification of creation to the fullest. As Fungi are the basis of every life form on Planet Earth, in every aspect of Mother Nature, the wisdom of symbiosis is observable.

But what exactly is the mechanism of this symbiotic relationship? Who initiated the relationship? And how do they communicate with the Plants using genes?

The initiation process of Plants and Fungi symbiotic relationship

Last year Yen-Wen Wang from the Departments of Botany and Bacteriology, University of Wisconsin-Madison, and his colleagues found that Fungi can develop genes having Plant-attracting characteristics in multiple ways, including making genes from scratch or copying specific genes from other Fungi species.

After Fungi exposure to the root, if Plant roots express a specific gene during symbiosis, immediately Fungi starts communicating with the Plant. The “Cooperative Fungi” partners with Plants and are continuously evolving. Understanding how the genes change over time for communication is tricky, said Wang, the study’s lead author. The study pulled sequences from databases and compared them to discover how Fungi communicate with Plants by borrowing genes from other Fungi or making new genes from scratch.

During the study, the research team uncovered a gene in the Amanita Fungi while studying. That gene itself was duplicated, which was responsible for degrading the cellulose from Plants. They assumed that this duplication might be used for substrate degradation. Along with this duplication strategy, the research team also uncovered another strategy while tracking Fungi genes. In this strategy, the Fungi can modify the duplicated gene with new functions and features to impress Plants, leading perhaps to forge a better relationship. So, in this way, Fungi are always developing themselves to improve relationships with the Plants.

With three strategies to choose from, gene duplication, making new genes, and gene swapping, how do Fungi decide which will be their first move in the initiation process?

According to experts, there are thousands of symbiotic and pathogenic organisms in just one gram of soil. Plants have to rigorously sort through these species of Fungi according to who is good and who is bad for them. Parsing through the bad and good partners in the soil is crucial for Plants to survive. The lead author explained that if the Plants cannot recognize those pathogens from the symbiotic Fungi, then the Plants could go extinct. These pathogens can take advantage of Plants to the extent they leave Plants without nutrients and eventually killing them. If Plants did not know how to sort through good and bad partners, it could lead to an epidemic and even the end of the species in extreme cases.

How Fungi connects with Plants

As Plants are not easy to bond with, and usually have their guard up fearing that the Fungi may have harmful intentions which could make them sick, how do the Fungi connect with Plants?

During their first encounter, some Plants would send chemicals to their roots to drive off harmful organisms, like some pathogens and Fungi. But the symbiotic Fungi have evolved countermeasures to Plants’ defense mechanisms. The research team observed that some Fungi species had acquired a gene that codes for the enzyme deaminase, transforming the defense chemicals into something less harmful to the Fungi and turning off the defense response. According to the study, symbiotic friendly Fungi could have acquired this gene characteristic from harmful Fungi species, but contrary to them, the symbiotic Fungi want a healthy relationship with Plants.

The lead author exclaimed that this specific gene is actually from another species of Fungi, which makes this finding pretty interesting. He further explained that these friendly Fungi got the deaminase gene through a horizontal gene transfer process. In this process, the symbiotic Fungi exchange genes with another species of Fungus that is not symbiotic and repurposed the gene to hack into the defense mechanism of Plants for friendly relationships. This dance of genes is what makes their symbiotic relationship blossom for their mutual benefit.

Discovering how Fungi employ different strategies to bond with Plants and knowing where these genes come from answers a fundamental evolutionary question in biology and paves the way to understand Fungi communications better. The lead author also mentioned that in addition to these genes, Fungi have “junk DNA” that most experts think is not useful. However, according to Wang, these genes are important to Fungi, which provide them with very different set of tools to create symbiotic relationships with the Plants. Determining and understanding the evolutionary fundamentals of Fungi and how they communicate can be leveraged by other fields like agriculture to improve crop cultivation as well as to assist humanity in fighting climate change. Forging relationships using such intelligent mechanisms, even with a doubting ally, is a wisdom which organisations and the whole of humanity can learn from the Fungi and Plants.