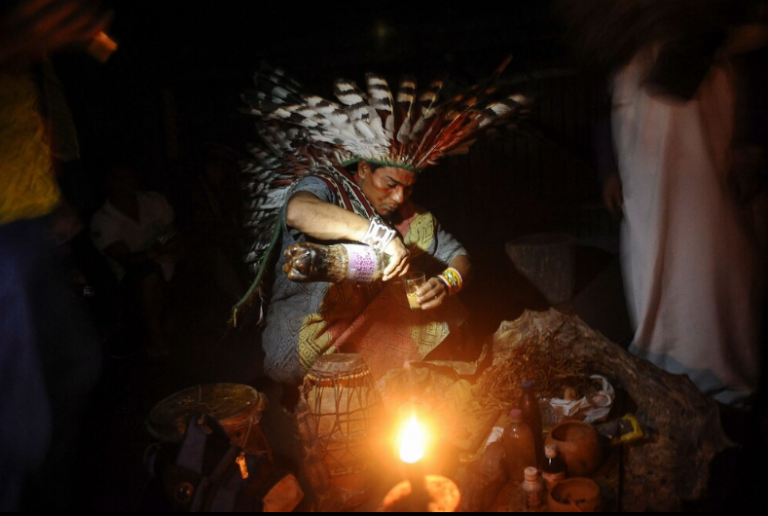 The Holy Medicine of the Holy and Divine Mother Ayahuasca has been considered as the ‘Mother of all Medicine’ by the Amazonian indigenous people for hundreds or possibly thousands of years, and is now spreading throughout the world through Sacred Ceremonies organised by traveling shamans who are also training regional shamans.

The Holy Banisteriopsis Caapi Vine is the main ingredient of the Holy Medicine. Based on the necessity of the Shamans and the availability of other admixtures, more than hundreds of various admixtures can be added in the Holy Medicine. Most commonly, either Psychotria Viridis (Chacruna), or Diplopterys Cabrerana (Chaliponga), or the Psychotria Carthagenensis (Amyruca) is combined with the Holy Medicine of the Holy and Divine Mother Ayahuasca. These admixtures contain high amounts of DMT, which is known to be the most powerful Psychedelic substance, which also happens to occur naturally in humans, Plants and animals. DMT is illegal in most countries, with exemption provided to few religious organisations.

Dozens of Amazonian cultures from Colombia to Venezuela to Bolivia to Peru, both indigenous and mestizo, have been traditionally organising Sacred Ceremonies where the Holy Medicine is consumed for many centuries, and possibly even millennia. Recognition of this ancient heritage has led to the piecemeal legalization of the Holy Medicine consuming rituals in the South American countries which is now spreading globally. The U.S. has issued religious exemptions to drug control laws for a couple of Amazonian-rooted churches which have evolved with the Holy Medicine as their Sacrament.

The Holy Medicine consumption has moved from strictly being part of indigenous shamanic healing Sacred Ceremonies to becoming a key component and Holy Sacrament of the Brazilian syncretic churches formed in the last century, to most recently being part of “New Age” rituals being conducted throughout the Western world.

Recognition of the Holy Medicine in the Western World

In the 1960s, the Holy Medicine started to be acknowledged worldwide with the counterculture movement, mainly in the West. Like Allen Ginsberg, Jack Kerouac, and William Burroughs, Beat writers all shared their experiences with the Holy Medicine.

Most famously, scientist-hippies like Terence McKenna and Timothy Leary at that time went to South America to research more deeply and experienced the Holy Medicine. All such efforts helped to bring the Holy Medicine into Western culture. The discovery of the Holy Medicine by the Westerners has resulted in a growing body of research suggesting that participants who take part in Sacred Ceremonies where the Holy Medicine is consumed experiences significant psychotherapeutic and spiritual effects.

The rise of the Brazilian syncretic churches

In the early twentieth century, many urban Catholic Brazilians, most with little to no clear connection to or knowledge of indigenous culture and traditions, moved into the deep Amazons to tap rubber to feed the rise of cars and other modern industrial tools. Once there, they encountered the Holy Medicine consuming traditions and, like modern North Americans and Europeans, they recognized something valuable. But rather than adopting and importing the rituals they encountered, some rubber tappers started building their own rituals based on experience with, and training in, indigenous practices and knowledge of their and their peers’ own cultural frameworks. They ultimately developed three new and distinct Brazilian Religions: Barquinha, Santo Daime, and the União do Vegetal (UdV), all based on the Holy Medicine as their Holy Sacrament.

The Church of Santo Daime was founded in the 1930s in the Brazilian Rainforest. In their rituals, they refer to the Holy Medicine as ‘Daime’, which is consumed as a Holy Sacrament. They consider the ‘Daime’ as a ‘Divine Being’, or even as the “Divine”, and to be the source of life, vitality, and health, and all knowledge and supreme wisdom.

Over the past few decades, Santo Daime has expanded all over the world, in 43 countries, of which 22 are in Europe. Santo Daime churches have thousands of active members who are actively attending Sacred Ceremonies twice a month and consume the Holy Medicine as their Holy Sacrament.

The first churches with the Holy Medicine as their Holy Sacrament, affiliated with the Brazilian Santo Daime, was established in the Netherlands. A legal case was filed against two of the Church’s leaders, Hans Bogers, who is one of the original founders of the Dutch Santo Daime community, and Geraldine Fijneman, the head of the Amsterdam Santo Daime community. Bogers and Fijneman were charged with distributing a controlled substance, DMT; however, the prosecution was unable to prove that the consumption of the Holy Medicine by members of Santo Daime constituted a sufficient threat to public health and order, such that it warranted denying their rights to religious freedom under ECHR Article 9. The 2001 verdict of the Amsterdam district court served as an important precedent. Since then, groups that are not affiliated to the Santo Daime have consumed the Holy Medicine, and a number of different “settings” have been developed, including non-religious approaches.

The União do Vegetal (UdV) started in the early sixties in a region near what is now the state of Rondônia. José Gabriel da Costa created the organization. The exact date of the creation of the União do Vegetal was 2nd July, 1961. The UdV has active, practicing communities – in over 100 villages and cities throughout Brazil, with 21,000 members worldwide. Approximately 600 UdV members live in the United States, and there are actively practicing communities in New Mexico, Colorado, California, Connecticut, Texas, Florida, and Washington.

The UdV understands that, through unity with the Holy Medicine, which they call ‘Vegetal’, the human being is given a chance to change thought patterns and behaviour and transform feelings in such a way that one can reconnect to this Symbol of União, strengthening a good family and social life.

In 2006, the U.S. Supreme Court, in a historic decision, unanimously approved the religious consumption of the Holy Medicine in the United States by the UdV. This was an essential step in the international recognition of the UdV, providing precedence to be followed by other countries where UdV operates actively.

Non-traditional consumption of Holy Medicine in the West

Kenneth W. Tupper, in one of his studies, showed that most recently, over the past few decades, another type of “setting” has been developed for the consumption of the Holy Medicine which extends from South America to both Europe and North America. These are Sacred Ceremonies, independent from any centralized organization, which vary in form and how they are conducted. Ceremonial leaders use techniques borrowed from both the more traditional and the contemporary expressions of communities which organise Sacred Ceremonies with the Holy Medicine. In addition, there is an increase in the frequency of the occurrence of these rituals in both urban and rural settings throughout the Western world, led by a shaman or by experienced local guides.

Marc Aixalà, of the International Center for Ethnobotanical Education, Research, and Service, a group which is trying to help societies navigate their newfound contacts with the Holy Medicine and the Holy Plants which are Psychoactive, pointed out that the framing of, and practices in traditional shaman-led Sacred Ceremonies with the Holy Medicine in the West, and at tourist-focused lodges in the Amazons increasingly diverge from those of Sacred Ceremonies for insiders, in order to meet Westerner’s needs and demands. Broadly, he says, they have eliminated rituals connected with abstract Amazonian spiritualism or magic, reducing the process which did not directly contribute to the quest of internal psychological healing and transformation with the Holy Medicine.

One of the first writers to cover Holy Medicine in the U.S., Peter Gorman, who established himself into an Amazonian river tribe community, and has participated in Sacred Ceremonies and has consumed the Holy Medicine many times, says enthusiasts have been touring with Amazonian shamans around the country since at least 1994. He added, “We have built a whole religion around [the Holy Medicine of the Holy and Divine Mother Ayahuasca],” a new set of beliefs and practices living right on top of old ones, “and I kind of shake my head sometimes.” A number of anthropologists and indigenous groups as well view such trends as a form of colonization.

Evgenia Fotiou, an anthropologist who studies Western adoption of Sacred Ceremonies and rituals with the Holy Medicine, points out that in the Sacred Ceremonies where the Holy Medicine is consumed, in the U.S. especially, a number of people are actually consciously moving away from aping or tweaking Amazonian traditions and towards developing their own practices, grounded in their own needs and cultural contexts. “They realize that a lot of the things that are offered in the authentic context are not for them.”

Rick Strassman, a leading voice in DMT research and popular discourse, suggests that to get therapeutic experiences building rituals which merge the Sacred Ceremony and the rituals involved with consuming the Holy Medicine with Western therapy could be a useful pathway. This is what many researchers of the Holy Medicine in the West have been exploring—and what enthusiasts often reject and run from.