Holy Medicine “Soma” in the Vedic literature and Yoga Scriptures 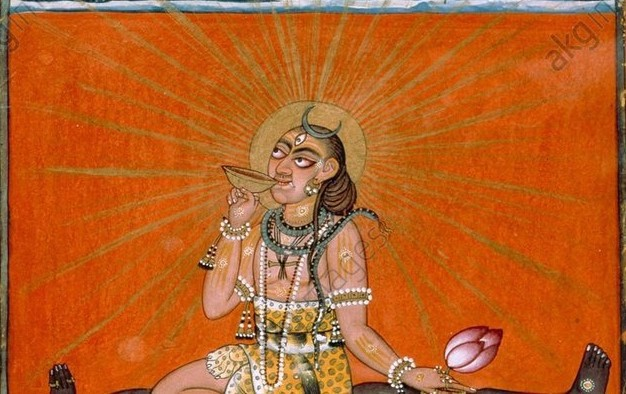 The four Vedas– the RgVeda, Atharvaveda, Samaveda, Yajurveda – form the foundation of present Sanatana Dharma. There are many different deities mentioned in the Vedas, with popular in terms of number of times being mentioned being Indra (King of Gods), Agni (God of Fire), and “Soma”. “Soma” is mentioned in the RgVeda, and also in the other Vedas.

However, the mention of “Soma” is not only as a Deity, but also as a Plant, and as a Juice of a Plant which is considered a Holy Medicine.

In the Vedas, the God Indra, who drinks “Soma” from birth, is ever-youthful, and intoxicated after drinking 30 ponds full of “Soma”, the slayer of three-headed snake/demon/dragon Vrtra (‘slayer of resistance’), is the deity occasionally identified with “Soma”, and of overwhelming power is often invited to be present in “Soma” rituals.

How is “Soma” prepared for Rituals and Rites according to Vedas

According to the Vedas, Brahmanas, Srautasutras, and other commentarial texts, the rituals with “Soma” is described:-

There are many kinds of Vedic ritual, comprising of both Domestic (grhya) Rites, which require the ritual establishment of the domestic fireplaces, and more elaborate Srauta Rites – both of which embody the combined and amalgamated types of rituals and minor rites. The Srauta Rites involve the three deities Indra, Agni and “Soma”, which is referred to as the ‘Divine Triumvirate’. The Srauta ritual is most associated with the Yajurvedic texts, where the “Soma” sacrifices are also highly elaborated, which are described in great detail in Brahmanas and Srautasutras. These are most important of the Srauta sacrifices in Vedic ritual which have been so since time of the RgVeda, core of which comprises of a liturgical collection of Hymns and rituals with “Soma” rites. The fundamental and typical Vedic sacrifices are the “Soma” rituals, which is regarded by all authorities as a distinct class of sacrifice and as the most important and superior of the three basic kinds of Vedic rituals – the other two being “Isti” and “Pasubandha”.  The Hymns of the Samaveda, Yajurveda and Rgveda mainly relate to the “Soma” sacrifice or other Srauta rituals.

Location, Colour, attributes of the “Soma”

The Holy “Soma” compared between the Vedic and the Yogic Sastras

“Soma” in Vedas is not a proper name but rather a ritual designation for a substance out of which “Soma” is pressed, observes ELIZARENKOVA (1996:28). According to some scholars, in the Vedic context, “Soma” may have referred not necessarily only to a specific Plant but to an effective preparation of Plants.

One of the popularly known main attributes of “Soma” is to be Amrt, i.e. to be immortal. However, although such reference as amrt is mentioned occasionally in the Vedas, the well-known myth of the “Juice of Immortality” does not appear until long after the Vedas were composed, in the well developed form in the Ramayana, Mahabharata, and Puranas. This identification of “Soma” simply as amrta or as a ‘Nectar of Immortality’ or the key to higher wisdom or consciousness. Although such notion may have been correct in essence, however such may have been detracted from an analysis of what exactly in terms of botany “Soma” actually had referred to in the Vedic context.

Interestingly, “Soma” being identified as amrta is reversed according to later Tantric and Yoga texts, wherein the ecstasy producing amrta, which is believed to be stored in the cranial vault becomes identified as “Soma”; and thus amrta becomes “Soma”. Details of this can be found in the Hathapradipika (3.44-46)

Here, what is being referred to is clearly an allegorical “Soma” rather than extracted “Juice” from a Plant. Simiarly, in the Khecarividya of Adinatha, “Soma” Is identified as an internal Nectar (Amrta), stored in eight places (kala), or as either streams/oceans – in one’s head, ‘drinking’ which , through khecari mudra, the yogi conquers disease and acquires a diamond body (MALLINSON 2007:124). Also in Tamil Siddha tradition it is believed that there is an endogenous “Soma” (correlative with exogenous “Soma”), which is fluid known as civampu (the flowering of civam) which is secreted in the midbrain, and which can be activated by yoga exercises (ZVELEBIL 1996:92). In Some Tibetan Buddhist transgressive rites (such as, for example, in the c. 8th century Cakrasamvara Tantra), combined male and female sexual emissions, which are consumed, are also sometimes referred to as “Soma”.

“Soma” was a part of the Vedic ritual, in the form of ‘Expressed Juice” of a Plant (or Plants), but on the other hand “Soma” had later also been identified in later yogic and tantric circles as an internal ‘Nectar of Immortality’, providing similar kinds of ‘siddhis’ and bliss engendered by the drinking of the “Soma” Holy Medicine.