How Plants perceive time without brain 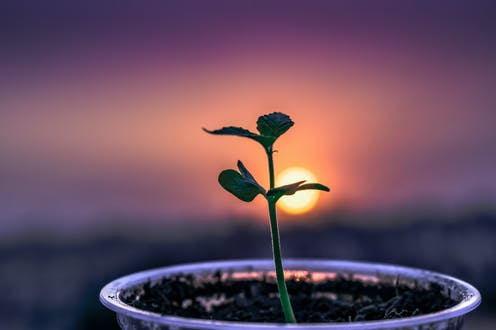 Recently multiple studies on the same subject by different scientists have discovered that Plants have an internal clock system and are able to perceive time just like humans do.

Humans have billions of cellular clocks spread across a complex network throughout the body. Humans and other mammals have a region in the brain called the ‘suprachiasmatic nuclei (SCN)’ where there is a master clock, with many other peripheral clocks which can be found elsewhere located in the body.

In most people SGN clock is operated by the planet’s natural cycle of light and dark, which then synchronizes the peripheral clocks by controlling the rhythms of nerve sensitivity and activity, body temperature, hormone secretion, and sleep-wake state cycles. By synchronizing the peripheral clocks, SCN harmonises the entire body’s rhythms according to the planet’s natural light and dark cycle. Previous studies have already demonstrated that ‘Plants’ have similar circadian rhythms which organize them and enable them to perceive the time of the day, allowing to prepare specific cells to photosynthesise before dawn, and produce nectar around the exact time of the day so that the pollinators are most likely to visit and turn on heat-protection mechanisms before the hottest part of the day. It appears that every cell of the Plant also acts as an internal clock, just like in humans!

Although, unlike humans, Plants do not have a central brain to keep their internal cellular clocks synchronized. So, how do Plants coordinate such circadian rhythms?

How Plants can perceive time

To answer this question PhD researcher in Cellular Biology at the University of Cambridge, Mark Greenwood, and his team showed that all the cellular clocks in the Plant coordinate partly through something called local self-organization. Every cell in the Plant body effectively communicates its timing with neighbouring cells, just like how schools of fish and flocks of birds coordinate their movements by interacting with their neighbours. Scientists are calling this interaction ‘chronoculture’.

Previous research found that the time of the cellular clock is different in different parts of a Plant. It was demonstrated that Plants’ cellular clocks regulate based on the measurement of protein production in different organs. These clock proteins generate 24-hour oscillations in biological processes. These differences can be detected by measuring the timing of the daily peaks in clock protein production in the different organs. For instance, certain clock proteins activate the production of other proteins which are responsible for photosynthesis in leaves just before dawn.

The researchers decided to examine the cellular clock across all the major organs of the Plant to understand how Plants coordinate their overall timing to keep the entire Plant ticking in harmony. In research with thale cress (Arabidopsis Thaliana) seedlings, the researchers found that the number of clock proteins peaks at different times in each organ. Every individual organ is independently capable of collecting information through signals from their local micro-environment. And based on the collected information, organs such as roots, stems, and leaves independently set their own pace.

The research team found that cells from each organ begin to form spatial wave patterns, where neighbour cells lag in time slightly behind one another. They explain it as a stadium or Mexican wave the sports fans create by standing up after the people next to them. When the number of clock proteins in one cell peaks, the cell communicates this to its slower neighbours, which follow the first cell’s lead and produce more clock proteins. These cells then do the same to their neighbours, and so on.

According to the researchers, this local decision-making by cells, combined with signalling between them through waves, might be how Plants make decisions without a brain. It allows cells in different parts of the Plant to make different decisions about how to grow. Cells in the shoot and root can separately optimize growth to their local conditions. The shoot can bend towards unobstructed light, and the roots can grow towards water or more nutrient-rich soil. It could also allow Plants to survive the loss of organs through damage or being eaten by a herbivore.

In previous research in 2017, Professor George Bassel from the School of Biosciences at the University of Birmingham has shown that similarly, the whole seed of thale cress acted as a brain to decide when to germinate signalling with hormones.

How useful is this finding for agriculture?

In a separate study, Chair of Cell Signalling in the University of Cambridge’s Department of Plant Sciences, Professor Alex Webb and his team demonstrated how differently we could harness the circadian clock rhythm of the Plants to improve crop yield and sustainability. In this research, they found Plants grow much better when their internal clock is synchronized with the environment they are growing in. They find out that the genes which control circadian rhythms in all major crops are similar and have many advantages. Understanding the circadian system can contribute to the regulation of biomass, Flowering, water use, photosynthesis, pathogen defences, and temperature stress responses, which are basic and important yield components in Plant crops.

Professor Webb noted that from the lab experiences, they learned that simple activities like applying pesticides or watering Plants could be more effective at certain times of the day. This means that farmers could use less of these resources by applying the knowledge, a simple win that could contribute to sustainability and save money. With the Plants’ internal clock knowledge and the ability to change it through genetic modification, the lighting and heating cycles could be matched to the Plant for highly efficient growth. Professor Webb also explained how chronoculture could give total control over vertical farming by understanding which crop Plants’ internal clocks are suitable to grow indoors and how optimizing light and temperature cycles can help them grow within a certain environment. The authors of the study also expressed that knowing Plants’ internal clocks could help reduce pest damage and provide an opportunity for chronoculture to make food production more sustainable.

Understanding how Plants make decisions is not just interesting; but this knowledge can be applied in practical situations to help scientists breed new Plant varieties which can adapt easily to the increasingly changeable environment with climate change. Scientists also believe that knowing the mechanism of chronoculture of the Plant can lead them to develop human medicine, which they call ‘chronomedicine’.

According to scientists, this medicine can be more effective when taken at a specific time in a day with specific applied conditions.

Although the sentience of any organism has not been possible to prove by any scientists, and although what constitutes consciousness has not been possible to grasp by scientists – referring to such as the ‘hard problem of consciousness’ and resorting to proving consciousness to such rudimentary tests as the ‘turin test’ – however, it is possible as a sentient human being to know that mechanistic activities in the brain have to do with ‘causation’ or ‘enablement’ of consciousness through findings matching with experiential knowledge/validation. Expecting a similar pattern, scientists have attempted to identify brain-like activity in Plants, although, needless to say, scientists, not being able to know their own mechanics of consciousness, are in no position to assert whether Plants have conscious experiences similar to humans through processes and composition unlike human-like brain construction. Indeed, with deeper self-knowledge, greater knowledge of Plant world will be available to learn from by humans.