Humans and Trees – A Holy Symbiosis 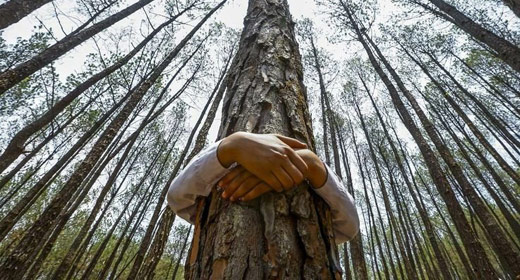 Many cultures across the world consider Trees as Sacred, and some cultures worship Trees. This has been practiced almost universally by all the ancient civilizations from every corner of the world. It is no wonder that Trees have captured human imagination since the beginning of time.

According to Dr. T. Herman Sissons, approximately 3-4 billion years ago, a non-chlorophyll micro-organismic bacterium without a cellular nucleus began to multiply within the oceans. These bacteria started a radical transformation by using the sun’s energy to metabolize carbon dioxide and water to generate carbohydrates and oxygen. By 2.3 billion years ago, they completely established the photosynthetic process and transformed Earth’s atmosphere into the life-giving oxygen-rich biosphere we are now experiencing. Around 1.8 billion years ago, a single algal population began to thrive, and these early organisms were intelligent enough to adjust oxygen release and carbon dioxide uptake, which not only ensured their survival but a thriving population which organized themselves and communicated well enough to encode the ability to reproduce, grow, inherit, and diversify, and thereby ‘thrive’.

Plant Neurobiology, a new field of science that is the study of plant intelligence, suggests that this was a conscious decision on the part of the Plants, and which is why several million years later, Plants moved to land to dominate, making up 99% of all living organisms on the planet. Because of their adaptability to their changing environment, and their tendency towards a relatively stable equilibrium between interdependent elements, this success has continued over the millennia and is still continuing.

Symbiotic Relations Between Humans and Plants

500,000 years ago, when humans are estimated by scientists to have emerged on earth, Plants were already well established as the life-giving, stabilizing beings on earth. From the beginning of time, from experience, humans realized that Trees were sentient ‘Beings’ and had long perceived them as their ‘Teachers’ and took them as profound symbols of Life, death, and renewal. Every aspect of human life is dependent on Plants. Plants not only sustain human life, but also ‘Teach’ spiritual growth, through the Holy Medicine of the Holy and Divine Mother Ayahuasca. Therefore, the relation between humans and Plants are a Holy Symbiotic Relationship, which is visible at multiple levels as follows:

Plants are the only source of oxygen on this planet, and thus the source of ‘life’ for human beings who must ‘breathe’, from Plants. It has been said that ‘half of human lungs hang outside their body’, referring to the fact that human breath – the fundamental and essential element for human life – is dependent on Plants.

The more human beings become conscious of the source of their breath, the more the relationship between humans and Plants deepen. When humans become aware that humans are exhaling carbondioxide, which the Plants are inhale, humans shift into the symbiotic reality of exchange of breath with all the Plants.

As Plants are photosynthetic, they provide humans with all the basic physical needs – human tissue comes from Plants which they cannot make from sunlight. All human food comes from Plants either directly or from an animal which ate leaves or fruits from Plants. Humans are in a cyclic and interdependent relationship with Plants for their very survival.

Some referred to ‘humans’ as ‘Walking Plants’, by observing such interdependent relationship with Plants, as if Plants are running human lives, through humans.

Edmund Sinnot, in one of his books ‘Cell and Psyche‘, suggests that “the rise in higher types of psychological behavior culminating in mind” is a result of Plants introducing self-awareness 1.8 billion years ago. These ancient Plants organized themselves and communicated with each other to grow, adapt, reproduce, and inherit – The Master Plants developed self-awareness. During this birthing of consciousness, Plants on this planet developed very complex and sophisticated communication abilities amongst the Plant kingdom, and eventually with other species, including animals, and also humans – as the Holy Medicine of the Holy and Divine Mother Ayahuasca allows humans to receive guidance and wisdom from Plants.

Plants have large protein molecules that can store large amounts of information, thus creating a huge capacity for complex communication and data retention. Amazingly, Plants can remember all of this to set future intentions of intelligent choice and as Jeremy Narby mentions in his book The Intelligence of Nature, “Plants learn, remember, and decide without brains.” All of this was occurring millions of years before emergence of human beings. In a way, all the Plants on this planet are collectively connected and aware and created a communication system which is very similar to neuron activity in human brains. Cognitively, humans are are imitating them unconsciously.

What has become obvious in the past few decades is how people are profoundly touched and inspired by Plants and their psyche-altering capabilities which provide humans with experiences of otherworldly realities. Psychotropic Plants, flower essences, Plant spirits, to mention a few, have become increasingly prominent in the world of Herbal Medicine and alternative healing options, which only goes to show that Plants are guiding humanity in their evolution, which seem to be a spiritual nature. Plants are guiding human beings and human beings are gradually listening.

Within the last decade, a new way of working with very common Plants, which are non-Psychoactive plants, is emerging. Plant-based Holy Medicine Sacred Ceremony is a form of initiation which the Holy Plant has offered to humankind. Plants have opened easy access to the spirit world, and for millennia people all around the world have been using this access to gain the necessary wisdom of the Holy Plants.

Trees are considered sacred in every corner of the planet wherever humans have settled, which is a sign of a deep relationship between humans and Trees. In every mythology, the importance of Trees can be seen. There are many profound beliefs around Trees which humanity have held for thousands of years. Below are some Sacred Beliefs about Trees which are still alive in various parts of the world:

All around the world many Sacred Groves can also be found which have been important parts of various cultures throughout history. Examples include Redwood Groves along the Pacific coast of North America, Cedar Groves in Lebanon, the Shaman Forests in southern Peru, and the Garden of Gethsemane in Israel. In Japan, a large number of Shinto and Buddhist Groves are cherished as sacred Natural Sites, while people in other parts of the world and with different religions have established specific Wooded areas as Monastic Groves.