‘Kratom’, the Plant-based Medicine is nature’s cocktail of compounds 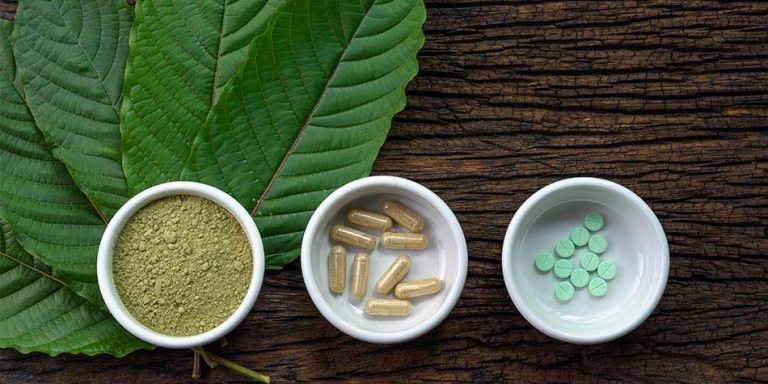 Kratom plant (Mitragyna speciosa) is a tropical evergreen Tree in the coffee family native to Southeast Asia. It is indigenous to Indonesia, Malaysia, Thailand, Myanmar, and Papua New Guinea. People of these regions have been ingesting this Plant as herbal medicine since at least the nineteenth century. According to researchers, Kratom has opioid properties and some stimulant-like effects.

A 2013 review article says that mitragynine comprises about 66% of the alkaloids in Kratom extract. Mitragynine is followed by paynantheine (9%), speciogynine (7%), and 7-OH (2%). More than a dozen other alkaloid compounds are present at less than 1%.

Only the Tree leaves have Psychoactive properties and can be crushed and smoked, brewed into tea, or put into capsules, the DEA said. Many people might label Kratom as Psychedelic, but researchers do not consider Kratom as a Psychedelic substance.

Why do people take Kratom?

Marc Swogger, an associate professor of psychiatry at the University of Rochester Medical Center in New York, who published a study which focused on the consumption of Kratom, said that most people consume Kratom for its pain relief ingredient, which is most similar to opioids. According to Swogger, Kratom is a good analgesic or painkiller.

People have also reported ingesting Kratom to help them stop abusing other substances, particularly opiates, Swogger said. According to his study, some people reported that using Kratom eases symptoms of opiate withdrawal, and many indicated that they had total success in discontinuing opiates. The study concluded that the findings support earlier research suggesting that Kratom may have therapeutic potential as an opiate substitute.

Swogger, in his study, also mentioned that other people in other studies reported using Kratom to treat post-traumatic stress disorder (PTSD)  and social anxiety.

Although the drug may cause people to experience some euphoria and a sense of well-being, Swogger said he did not think many people were using Kratom specifically to get high.

What does Kratom do in the body?

Researchers are not entirely sure how exactly Kratom works in the body. It’s not an opiate, but it binds to the opiate receptor. Most people think that a compound called mitragynine is the main active ingredient in Kratom, but it has not been studied enough to know for sure, Swogger added.

Unlike opiates, which have a sedative effect, according to Swogger’s observation, Kratom seems to have a stimulating effect at lower doses and a relaxing and sedating effect at higher doses. People who have consumed Kratom have reported pain relief but such a way which did not knock them out.

What are the risks?

Swogger’s study showed that the common side effects of Kratom are similar to those of opiates, including upset stomach, vomiting, itching, and mild sedation.

However, the risks appear to be relatively mild, particularly when compared to those of opiates. Overdosing on Kratom is almost unheard of because people will start vomiting long before they overdose. There have been two cases of liver problems in Kratom consumers, Swogger said. About chronic ingestion, he stated that given the preliminary data on Kratom, and a lack of controlled human studies, chronic ingestion is of unknown safety.

According to the DEA, Kratom has addictive properties. Some people have reported experiencing withdrawal symptoms when they stopped consuming Kratom and had developed a tolerance to the Medicine. Withdrawal symptoms and developing tolerance to Kratom was generally, though not uniformly, reported as being mild relative to opiates. About one in 10 people in the study reported withdrawal symptoms after a period of heavy consumption, followed by at least one day without consuming Kratom. The findings highlight the importance of educating people about the potential risks of Kratom consumption. The researchers cautioned that people who have had substance use problems in the past should carefully weigh Kratom’s potential pros and cons, especially since Kratom may be considered as a less harmful substitute for other drugs, it may also be difficult to stop consuming the Kratom, the researchers wrote.

In the U.S., the DEA had announced a temporary federal ban on Kratom around the end of 2016. Later the DEA had banned the active chemicals in the Plants and had placed Kratom on Schedule-1 of the Controlled Substances Act, the most restrictive regulatory category, designated for substances with no medicinal purpose and a high potential for abuse.

Currently, Kratom is technically legal at the federal level; some states and municipalities have chosen to ban the substance, making it illegal to sell, possess, grow, or use it. Others have imposed age restrictions. For example, in Alabama, Indiana, Arkansas, Vermont, Kratom is illegal to buy, sell, possess or use, but in Alaska, Arizona, California, Colorado, and other states, Kratom is legal but may be regulated.

Outside the U.S, the laws surrounding Kratom also vary country-wise. Kratom is illegal in many countries such as Australia, Denmark, Finland, Israel, Japan, and Myanmar.

The compounds found in Kratom have been researched for a long time and found to be non-Psychedelic in terms of activity. However, the active compound of Kratom, mitragynine, has intriguing activity at serotonin receptors like 5-HT2c and 5-HT7. More research can lead to a better understanding of this activity for getting a complete picture of the pharmacology of mitragynine and other compounds found in Kratom.

Tohar, N. (2016). Volatile compounds and alkaloids from the aqueous extract of Mitragyna speciosa and their in vitro and in vivo anti-inflammatory studies. Doctoral thesis. University of Malaya, Kuala Lumpur, [online] Available at: https://pdfs.semanticscholar.org/6279/b3f059c3225e71b6f0bb36cb1fa3ff0bc810.pdf [Accessed 12th August 2021].