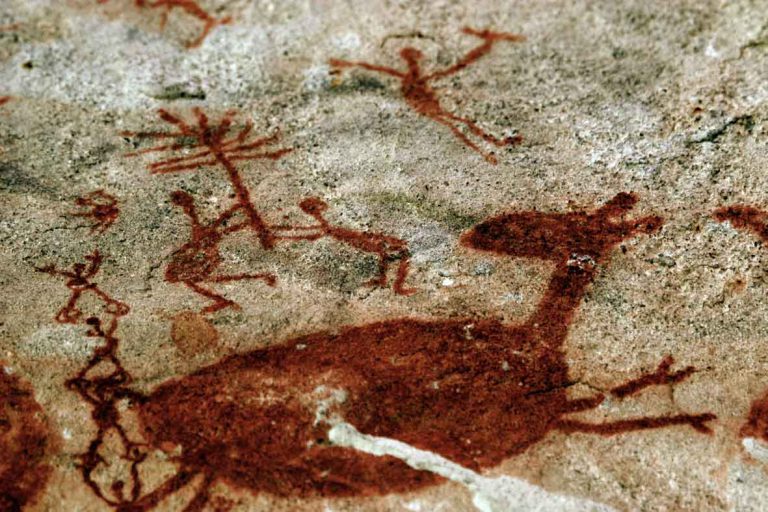 Some of the cave paintings are the oldest man-made depictions of anything that was more important to humanity’s prehistoric ancestors. The artists of the Palaeolithic ancestors were mostly preoccupied with depicting animals and humane forms. Pictures of humans and Plants in cave paintings are very rare.

The reason for this is not clear, and a wide range of debate is ongoing as to why prehistoric people did not depict Trees or any forms of Plants. However, many archaeologists and experts have suggested that cave paintings generally functioned as some kind of ritual or hunting preparation used to increase the probability of a successful hunt.

The UNESCO World Heritage Site at the Serra da Capivara National Park in northeast Brazil is different among all the discovered cave painting sites. The area is known for hundreds of ancient cave paintings, many of which feature numerous humans and Plants. In one of the paintings, amidst a lively scene of human and animal figures, it may well be the oldest man-made depiction of a Tree.

In this picture, a deer, a bird, an ‘ema’, and some human ﬁgures can be observed. Two anthropomorphic ﬁgures are carrying a Tree or maybe a large branch. To their left, two ﬁgures point at another Tree. Between the ‘Tree scenarios’, four of a total of ﬁve human ﬁgures appear to be engaged in acrobatics. Below the deer, two human ﬁgures in yet another ‘Tree scene’ and two ﬁgures more at the top of the Tree.

But why human figures are gathering around Trees is not clear in this painting. The answer to this question may well be depicted in another painting found in the same area. This one has just as strong a claim for the title of the oldest depiction of a Tree.

Here the Tree figure is larger, and it is surrounded by a bigger group of human figures, presumably male, who are worshiping the Tree they have encircled. The oldest man-made pictorial depiction of a Tree appears to be worshipping one.

The age of these cave paintings is still something of a mystery as many of the paintings in the area have been dated by experts to be older than 25,000 years. But according to the majority of archaeological evidence, humans only migrated to the Americas around 15,000 years ago. So, who exactly were these ancient people?

According to Anne-Marie Pessis and Niède Guidon, who studied this site, exactly when these rock paintings were created is very difficult to state, but thanks to discoveries made during archaeological excavations. According to these discoveries’ morphology, there is a good reason to believe that the painted sandstone blocks discovered in sediment layers may be more than 20,000 years old.

These prehistoric ancestors of humanity, the artists who had painted these oldest surviving depictions of Trees, surely must have depicted their daily lives around the Trees. These pictorial depictions are clear indications that they understood the importance of Trees in their lives.