Pilostyles, the mysterious Plant living within Plants like botanical aliens 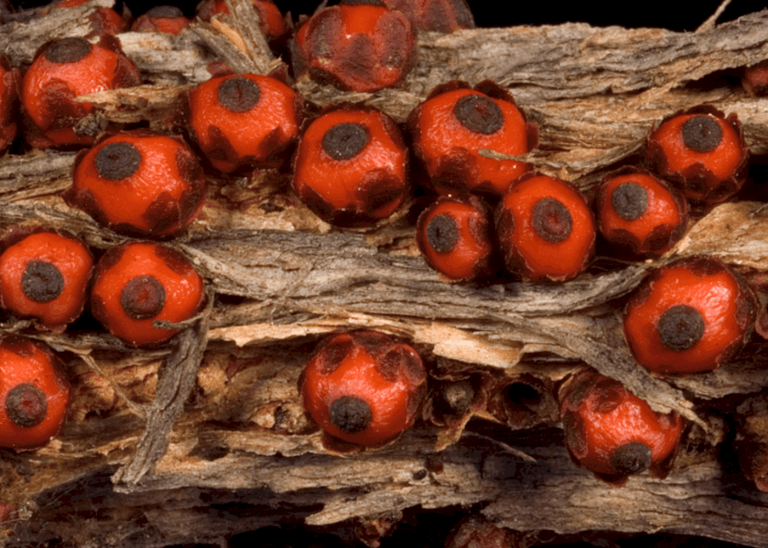 Most Plants have a familiar structure of roots, stems, leaves and flowers, and grow in the ground. But a few Plants abandon these to become parasites. Pilostyles has taken parasitism to another level as an “endoparasite”, by living inside their host. Unlike almost all other Plants, Pilostyles has evolved to abandon stems, leaves and roots. When not flowering, Pilostyles live inside the host, as pale threads of cells within the host’s roots and stems, from which nutrients are acquired.

In 1946, forestry officer Charles Hamilton found something unusual on a shrubby native pea Plant growing in Mundaring, near Perth. When he showed these to government botanist Charles Gardner, Gardner initially dismissed them as “galls”. However, with a closer look, Gardner realised he was holding a specimen of one of the world’s most extraordinary flowering Plants. In 1948, he described them as Pilostyles Hamiltonii.

Pilostyles become externally visible only when they are flowering, the flowers erupting from the stems of its host like a weird botanical Alien. Three species of Pilostyles occur in Australia, all of them in Western Australia. Each has a specific host. Pilostyles Hamiltonii only grows in Plants in the genus Daviesia, P. Coccoidea in Jacksonia and P. Collina in the poison-pea genus Gastrolobium. Pilostyles flowers are about the size of a match head. They appear on stems after their host has completed its own flowering. Therefore, the host Plant seems to flower twice a year but with completely different flowers.

There is so much mystery surrounding the Pilostyles. Unlike host Plant, Pilostyles Plants are either male or female. The two different sexes rarely, if ever, colonise the same host Plant. According to researchers, they seem to be able to recognise a host that is already obtained by another Pilostyles Plant. The pollen from a male flower must find its way to a female flower located on another host Plant.

It is observed that various insect species have been seen feasting on their flowers; it is still uncertain which are effective pollinators and if Pilostyles has specific pollinators.

Its fruit rots quickly when it falls on the ground. The tiny seeds are less than 1mm long, and each has an embryo of only eight cells and a very small amount of stored food. How the seeds are spread and how they recognise their host species amongst all the other Plant species growing nearby is still a mystery to botanists. Typically other parasitic Plants recognise root exudations from their hosts, but this is not proven for Pilostyles.

Because Pilostyles lives in the dark and does not photosynthesise, it has no apparent need for chloroplasts. Pilostyles still retains remnant chloroplasts with tiny genomes that contain only five or six active genes. These are the smallest chloroplast genomes ever described. Several genes in the Pilostyles nuclear genome closely resemble genes of its host, indicative that the Pilostyles are not only taking nutrients from the host but also copying from their genes. This phenomenon is called horizontal gene transfer, and it is comparatively common amongst Plants which are parasites.

Evolutionarily the ancestor of today’s Pilostyles rejected life as a green Plant living under sunlight; instead, they snuck their way into the body of other Plants. Over evolutionary time, Pilostyles have survived ice ages and tectonic plate movements and now exist as ten described species living on five continents. The mysterious Pilostyles reminds the scientific community of the incredible tenacity and adaptability of life.