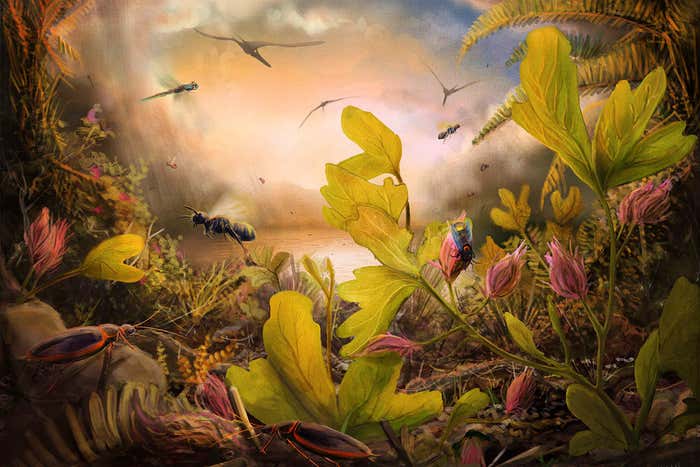 Flowering Plants are the most diverse group of land Plants with no obvious evolutionary predecessors; where did they come from? And how did flowering Plants get to be so different from their ancestral primitive land Plants like ferns, mosses, and conifers? Tormented by their mysterious origin, Charles Darwin called them an “abominable mystery”.

Recently a Stanford-led study unveiled that rather than evolving gradually over hundreds of millions of years, land Plants underwent major diversification in two dramatic bursts. The first event which occurred early in Plant history, giving rise to the development of seeds, and after 250 million years apart, the second event took place during diversification of flowering Plants.

According to Andrew Leslie, an assistant professor of geological sciences at Stanford’s School of Earth, and the lead author of this study, about 100 to 66 million years ago, in the Late Cretaceous, Planet Earth more closely resembled the current Planet — but without the flowering Trees and bushes.

The second burst of complexity was more dramatic and diversifying than the first, indicating the unique nature of flowering Plants. That period gave rise to Plants like the Passionflower, which can have 20 different types of reproductive parts, more than twice the number found in non-flowering Plants.

Flowering Plants are more diverse than every other group of land Plants, producing smells, colors, and shapes that nourish and attract animals and delight their senses. They are also complicatedly structured with petals, pistils, and anthers, interwoven in precise arrangements to lure pollinators and trick them into spraying pollen from one flower to another.

This complexity makes it difficult for scientists to compare flowering Plants to Plants with simpler reproductive systems, such as moss or some conifers. As a result, botanists have long focused on characteristics within family groups and typically study evolution in non-flowering Plants separately from their more intricate flowering relatives.

Leslie and his research team overcame these differences by designing a system which analyzes and classifies the number of different kinds of parts in reproductive systems based on observation alone. Each species was scored according to how many types of parts it has and the degree to which it exhibited clustering of those parts. They analyzed and categorized about 1,300 land Plant species, appearing from around 420 million years ago until present times.

According to Leslie, this tells a very simple story about the evolution of reproductive systems of Plants in terms of their form and function. The research team observed that the more functions the Plants had and the more specific they were, the more parts there were. He further explained that it is a very useful way of thinking about broad-scale changes encompassing the whole of Plant history.

Evolution from shrubs to blooms

About 420 million to 360 million years ago, when land Plants first diversified in the early Devonian, Earth was warmer and devoid of Trees or terrestrial vertebrate animals. Mites and arachnids like scorpions roamed the land amongst short, patchy Plants and the tallest land organism was a 20-foot fungus resembling a Tree trunk. According to experts, after the Devonian era, huge changes occurred in the animal kingdom. Land animals started to evolve to have large body sizes and more varied diets; with them, insects diversified too, dinosaurs appeared, but the Plant kingdom did not see a major change in reproductive complexity until they had evolved flowers.

Based on archaeological evidence, insect pollination and animal seed dispersal may have appeared as early as 300 million years ago, but according to Leslie, it is not until the last 100 million years that these really complex interactions with pollinators are driving this super high complexity in flowering Plants.

The research team concluded that there was such a long period of time where Plants could have interacted with insects in the way that current existing flowering Plants do now, but they did not do it to the same degree of intricacy and waited 250 million years to evolve into full-grown Trees. And after such a long wait, the second burst took place.

The flowering Plants are known as angiosperms. The oldest angiosperm fossils so far discovered are about 135 million years old, and many researchers have theorized that this was when the group had originated. The fossil records suggest that the group then became diverse around 130 million years ago.

But how have the flowering Plants become highly diverse in such a short span of time after their first emergence has long perplexed researchers, and have puzzled the scientific world.