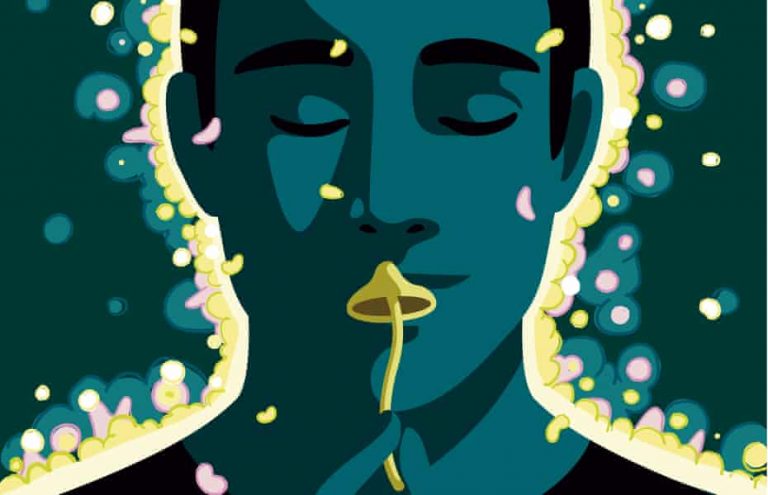 Currently, in this age of a ‘Psychedelic Renaissance’, the ancient wisdom is reincarnating with modern science, providing scientists a glimpse into the deeper realms of ‘reality’ for a chance to solve what is known as ‘the hard problem of consciousness’. With the help of these ancient sources of ‘Wisdom’, scientists are beginning to understand how human brains give rise to normal states of consciousness and neuroscientists are understanding how and why these mental changes occur.

Psychedelic substances and Holy Plant-based Medicines are helping and guiding humanity towards perceiving ‘Unity’ of life, and helping solve the mystery of consciousness.

How old is the relationship between humans and Magic Mushrooms?

Though Psilocybin has recently become very well-known in the world of Psychedelic substances, the history of ‘Magic Mushrooms’ in human hands is an ancient one. Fungi, the exposed part of which is what are called ‘Mushrooms’, have hundreds of millions of older origins than Trees. The earliest known species dates back to over a billion years ago with the discovery of Ourasphaira Giralda, a fossil species uncovered by Palaeobiologist Corentin Loron. Considering the versatility of Fungi to grow in some of the most inhabited areas, it is a possibility that primates may have foraged for Psilocybin. In their instinct to feed themselves, their discovery of Fungi may have also unknowingly enhanced their cognitive abilities.

One of the most famous ethnobotanists, Terence McKenna, theorized that Mushrooms might have even accelerated the progress of human evolution. This is a very interesting and controversial theory which is aptly referred to as ‘Stoned Ape’. However, whether or not these ‘Magic Mushrooms’ actually revolutionized primitive people’s consciousness, one thing is for sure that indigenous communities from Central America to Siberia ritualistically consumed ‘Psychedelic Mushrooms’ and connected with Holy Mother Nature and higher spiritual realms.

In the native language (Nahuatl) of Mayan and Azect people, Psilocybin was called Teonanácatl, which translates to “Flesh of the Gods.”

Aztec Mayan and Toltec religious myths tell stories of these particular Mushrooms, postulating that these Mushrooms were given to their ancestors by the ‘Serpent God’, “Quetzalcoatl”, who was honoured as the Creator of all life. These ancient societies continued to keep records of Psilocybe Mushrooms and their spiritual potentialities in both art and myth, which suggests how old the relationship between humans and ‘Magic Mushrooms’ is.

Ego, oneness and the claustrum

Researchers are currently studying the distribution of serotonin 2A receptors to locate the brain areas which are affected by serotonergic Psychedelic substances. According to a study published in Neuropsychopharmacology, the greater the density of these receptors the greater the likelihood that a specific human brain region contributes to the Psychedelic experience. According to the researchers, knowing this will enable them to understand which brain regions are involved in various states of consciousness.

Recent findings confirmed that the claustrum is one of the multiple brain regions that are rich in serotonin 2A receptors and organizes brain activity. Last year cognitive neuroscientist Frederick Barrett and his colleagues at the Johns Hopkins Center for Psychedelic and Consciousness Research examined how exactly Psilocybin affects neural activity in the claustrum.

Their breakthrough study in this field used real-time brain scans of humans to show that Psilocybin reduces activity in the claustrum region by up to 30%. This significant reduction leads to people’s subjective feelings of ‘ego dissolution’, which enable them to unify with their surrounding environment while under the influence of Psilocybin. The researchers observed that the less active the claustrum, the stronger the Psychedelic effect was; this includes the mystical-type and emotional experiences. The authors of the study mentioned that their work supports a possible role of the claustrum in the subjective and therapeutic effects of Psilocybin.

In this mysterious part of the brain, a thin sheet of neurons sends and receives signals to and from other brain regions. Growing evidence suggests the claustrum orchestrates consciousness, which gathers, sends, and integrates information from almost every brain region. Some experts, like neuroscientist Christof Koch, believe that the sense of ‘self’ and ‘ego’ rest here.

Several years ago, Koch and his colleagues of the Allen Brain Institute for Brain Science found anatomical evidence in mice to support this idea. They identified several large neurons projecting from the claustrum, with one wrapping around the circumference of the brain. Around the same time, they published a paper in the Journal of Comparative Neurology describing the vast connections between the claustrum and various brain regions in mice.

According to Koch, this brain region, by integrating and orchestrating the coherence of brain networks, supports the perception and cognition of an individual.

Depending on the variations in the activity, levels of the claustrum are associated with different states of consciousness. For example, the claustrum coordinates synchronized slow-wave activity in the brain. This particular state of consciousness is a feature of certain deep sleep stages during which the brain maintains synapses and consolidates memories. Neuroscientist Yoshihiro Yoshihara and colleagues of the RIKEN Center for Brain Science recently published a study in Nature Neuroscience. They showed in mice that increased neural activity in the claustrum mediates a global silencing of brain activity through resting-state slow waves.

According to neuroscientists Robin Carhart-Harris and Karl Friston, Psilocybin likely subdues the so-called gate-keeper function of the claustrum, causing a loss of organized, constrained brain activity. Such desynchronization increases connectivity between brain regions that are otherwise not engaged with one another, producing a change in consciousness.

According to experts combined with supportive psychotherapy, such expansive, unconstrained cross-talk between brain regions is believed to help break habitual patterns of thinking and behaviour, leading to psychological breakthroughs. This mechanism may also explain how Psilocybin can affect positive change in such a wide variety of psychiatric conditions. Neuropsychopharmacologist David Nutt and colleagues of the Centre for Psychedelic Research at Imperial College London discuss these ideas in a paper published in Cell.

According to Barrett, the claustrum may play a fundamental but different role in these experiences. While we still do not understand human consciousness, gradual increases of discoveries like these from different fields may one day lead us to the great understanding of consciousness, thanks to Psychedelic substances like Psilocybin and Holy Plant-based Medicines helping to open up the mind, and the curiosity of scientists to pursue understanding.