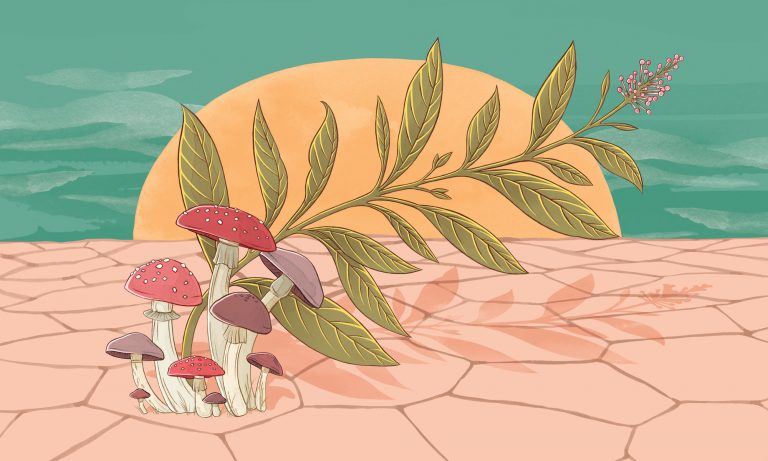 Plants began life as aquatic species and gradually started to move onto land. About 450 million years ago, when the first Plant decided to leave aquatic life to live on land, was it a conscious decision to diversify the land of Planet Earth? Or was it just a part of the genetic program of aquatic Plants to diversify however they can?

A long-standing theory assumes that Plants may have colonized the land we are living on because of the symbiotic relationship with Fungi. Around the 1980s, the study of fossils led a group of scientists to the hypothesis that a symbiotic relationship between Plants and Fungi may have been at the origin of terrestrial vegetation.

A most recent study by an international group of researchers has confirmed this theory and validated the most ancient symbiotic relationship that enabled life to exist and thrive on Planet Earth. A group of French scientists conducted this study from the Centre National de la Recherche Scientifique (CNRS) and the Université de Toulouse III – Paul Sabatier, in collaboration with the Institut national de la recherche agronomique (INRA).

The beginning of the ancient Plant-Fungi symbiotic relationship

To understand life in the past, scientists had to study present-day Plants. According to scientists, there are two main categories of Plants, one of them is Vascular Plants with stems and roots, and the other one is non-Vascular Plants which are called Bryophytes, such as Mosses. Previous studies have shown that most currently living Plants survive and thrive through the symbiotic relationship with the Fungi. Up until now, scientists were not entirely sure if the ancient ancestor of the terrestrial Plants were in a symbiotic relationship with the Fungi or not.

From previous studies, particularly in Vascular Plants, scientists have already identified the genes which are essential for the proper functioning of this symbiosis. In this present study, scientists concentrated on a Bryophyte resembling succulent Plant Liverworts (Marchantia Paleacea). It is important to note that previously no such study has ever been conducted to identify the symbiosis genes of the Bryophyte Plants.

By studying Liverworts, scientists were able to demonstrate a lipid transfer (lipid is an important component of living cells) between Fungi and Bryophyte Plants as observed in the Vascular Plants. By using CRISPR, a molecular tool that allows scientists to modify DNA precisely, they were then able to alter a gene that scientists predicted as ‘symbiotic’. After this alteration, as in Vascular Plants, scientists observed symbiosis failure in the Bryophyte Plants too.

This connection led the scientists to the common ancestor of these two groups of Plants, which colonized dry land. And according to the result of this study, this common ancestor must have exchanged lipids with the Fungi, as do the currently living Plants of today. Thus, this result mechanistically establishes a 450 million years old symbiotic relationship.

Underground Fungi network is the key to thriving Plants

In 2019, ecologist Stephanie Kivlin, an assistant professor at the University of Tennessee, Knoxville, showed that AM Fungi are especially helpful to their hosting Plants. Kivlin further explained that Mycorrhizal Fungi networks below the ground are one of the largest influences on Plant tissue nutrient concentrations. AM Fungi increases Plant nutrient concentrations in Plant leaves, roots, litter, more than Ectomycorrhizal Fungi.

Recently, a series of individual studies have demonstrated that different Arbuscular Mycorrhizal (AM) Fungi serve different functions to their hosting Plants. Some species of AM Fungi are better at providing and collecting nutrients, while some of them are more helpful with providing chemicals to create a strong defense system against diseases and herbivores. Scientists have observed that changes in the number and types of AM Fungi species can significantly determine how well Plants will diversify within a certain location.

A deeper understanding of the functions of various Fungi can provide us the knowledge that can be practically used to diversify healthy Plants within a certain area to fight climate change.

Can Plants and Fungi together slow down climate change?

In 2019, a global assessment showed that human activities have significantly reduced the symbiotic relationship between Plants and Fungi. According to scientists, these symbioses play a key role in storing carbon in soils. They predicted that restoring these ecosystems could be one of the best effective strategies to slow down climate change.

According to Ian McCallum, an IIASA researcher and the co-author of this study, human activities such as agricultural practices worldwide have altered 50% to 75% of the Earth’s ecosystems. This alteration transformed the natural areas with previously strong carbon-storing Mycorrhizal symbioses to much weaker relationships. He further explained that humans have potentially further contributed to increased atmospheric carbon dioxide by altering the Plants that grow across much of the Earth’s surface, from those with strong soil carbon storage to weak carbon storage.

Along with this extraordinary result, the study identifies a potential mechanism that could be utilized to decrease atmospheric carbon dioxide through enhanced soil carbon storage. The authors of the study suggest that restoring native vegetation that enables Ectomycorrhizal symbiosis with soil Fungi could alleviate anthropogenic soil carbon losses and decrease atmospheric greenhouse gases.

Nadejda Soudzilovskaia, the study’s lead author, suggests that the accumulation of carbon in vegetation and soil is one of the most promising paths to reaching the atmospheric carbon dioxide removal goals. This study provides a new detailed map of Mycorrhizal distribution worldwide that will let humans create conscious policies towards decreasing atmospheric carbon dioxide by storing carbon in Soil and Plants.