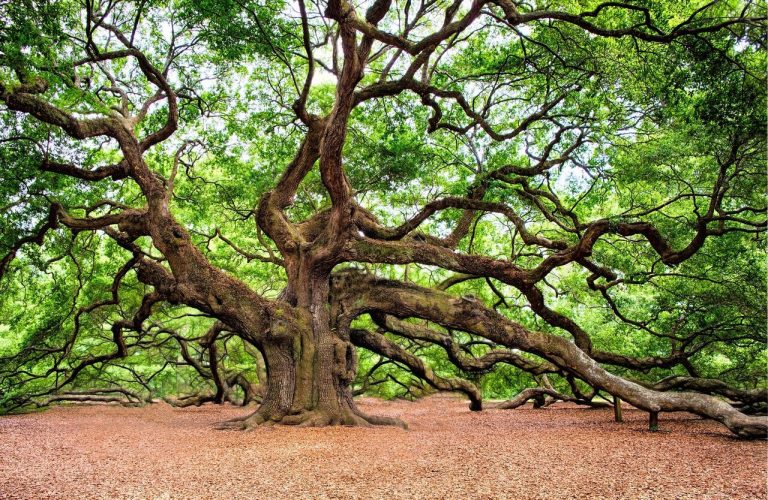 The whole complex life cycle on Planet Earth, including Forests, is the result of billions of years of the groundwork of Fungi forefathers. Even before Plantlife diversified on land, Fungi survived and thrived on the barren lands, and in this process, they transformed rocks into carbon gas-based soil with a Plantlife-friendly environment. Fungi brought Plantlife from the water and helped them to survive, adapt, and evolve on land by forming symbiotic relationships. Even after millions of years of evolution of this coexisting symbiotic relationship, most land Plants are still dependent on Fungi which is a clear indication that no species on Planet Earth can be self-sufficient alone; symbiosis is the only way to survive and thrive.

According to some experts, Fungi are the largest living organism on Planet Earth, directly or indirectly connecting all the living forms, making this Planet a single living Entity. If Forests are the lungs of Planet Earth, then the networks of Fungi all over the underground world are like blood vessels connecting other organs of this Entity.

Fungi are the only organisms that have not only faced the harshest reality of Planet Earth but also survived, evolved, thrived, and transformed that harshest reality into a life-giving Planet in this solar system. In this sense, Mother Nature has manifested Wisdom through the billion years old Fungi.

Considering the importance of Fungi on Planet Earth, how are they responding to climate change is immensely important to predict the future effects of climate change. Scientists all over the world are investigating how climate change is affecting the millions of years old symbiotic relationship between Fungi and Plants.

How is the Fungi world coping with climate change, and will decide if the Planet will end this current life cycle to start a new one, or if it will find a balance to sustain the current cycle?

Fungi diversity varies depending on factors

Scientists have identified over 100,000 species of Fungi till date, though there may be many more, estimated to be as many as 1.5 million species, awaiting discovery.

According to Kabir Peay, an associate professor of biology in Stanford’s School of Humanities and Sciences, Fungi are critical for the functioning and health of Forests.

In 2020, Peay and his colleagues published a research paper predicting the effects of climate change on the diversity of Fungi. Over several years, the Peay lab has collected around 1,500 soil samples from 68 Pine Forests, from Florida to Alaska, which represent a swath of North America. Previously, they sequenced DNA in each sample to understand which Fungal species live in those soil samples and in what abundance. Their results suggested that Fungi were different in each region, contradicting a common previous assumption that Fungi would be similar in most places in the world.

For their latest research, the research team from Stanford University explored the relationship between their collected geographical Fungi Patterns data and historical climate data and found that climate was by far the most significant predictor of contemporary Fungal diversity patterns across the North America.

The researchers found that different regions of North America they had been investigating had unique optimal temperatures for Fungi diversity. The researchers then applied all their collected data to predict the future diversity of Fungi, given forecasts of climate change produced by the Intergovernmental Panel on Climate Change (IPCC).

According to their model, by the year 2070, climate change could cause the local loss of over a quarter of Ectomycorrhizal Fungi species from 3.5 million square kilometre of North American Pine Forests, which is an area twice the size of Alaska.

Assuming it is as easy to lose Fungi species compared with development of new species, other regions such as the Eastern Temperate Forests could develop 30% to 50%. According to Peay, the lead researcher, the result is shocking and a bit scary, as according to their prediction there will be significant decreases in Fungi diversity in western North America.

Based on earlier research, Ectomycorrhizal Fungi develop a cover around their hosts’ roots which help prevent the effects of climate change and protect roots from damage and disease. The researchers observed that the Fungi seem to promote carbon storage in soil by slowing down decomposition and reinforcing the buildup of soil. Fungi also help their host Plants grow more quickly and absorb more carbon by improving the ability to take in nitrogen, needed for Plants’ growth.

In terms of ecosystem function, particularly buffering the atmosphere against climate change, Ectomycorrhizal Fungi are the most effective. Based on this work, the researchers are considering investigating Forests with low diversity of Fungi and conducting experiments to gain better understanding and be able to predict how altered Fungi communities might operate in the future.

To get a sense of how the warming of climate could affect California’s Woodland soil Fungi community, a research team from the University of California sampled soils at sites along arid to the moderately moist climatic gradient at the Tejon Ranch in the Tehachapi mountains. According to An Bui from the department of Ecology, Evolution, and Marine Biology of the University of California, the sites they worked at were a proxy for what they think California would look like in the future due to ongoing climate change. According to the researchers, as one ascends from the warmer, drier base of the mountains into the cooler, moister elevations, the landscape changes with the temperature and relative humidity, giving the researchers a glimpse of California woodlands as climate change forces them to retract.

Of particular interest to the research team were the soils around the Oak Trees that mark the landscape, where, in addition to the decomposers and pathogenic Fungi in the soil, Tree-mutualist Mycorrhizal Fungi, such as Arbuscular Mycorrhizae and Ectomycorrhizae create their vast networks. The researchers were interested in how the number of species of Fungi and their abundance might change between sites.

According to the lead author of the study, they found the Fungi communities are completely different, and the hottest, driest sites had the highest number and the greatest diversity in Fungi species. But, while the larger Fungi communities varied from site to site, the communities of mutualist Fungi within them tended to remain the same, saving for small shifts within the mutualist populations to select for traits that could be more useful under the circumstances. The researchers observed that Ectomycorrhizae and Arbuscular Mycorrhizae communities were more similar across climatic conditions than the whole Fungi community. According to Bui, there is a possibility that the host association for mutualists at least buffers shifts in the whole community structure. If it is right, then the benefits could be mutual. In the face of a changing California Woodland ecosystem, buffering the Fungi from climate change preserves their function, which could, in turn, save their host Plants’ function.

According to researchers, more studies should be conducted to understand how far this buffering effect would stretch, but the current result seems positive, which is good news for the future of California Woodlands.

According to Peay from Stanford University, for microbiome work, the scientific world is in a new era of discovery – similar to Darwin and Wallace getting on ships and going to new places and seeing new things and changing the way they viewed the world – that is exactly what is happening in this field. More research in this field might enable the scientific world to tap into the wisdom of the Fungi world which could lead humanity to a greater understanding to sustain life by mitigating the effects of climate change.