Shamans conducting the Ceremony for the Holy Medicine 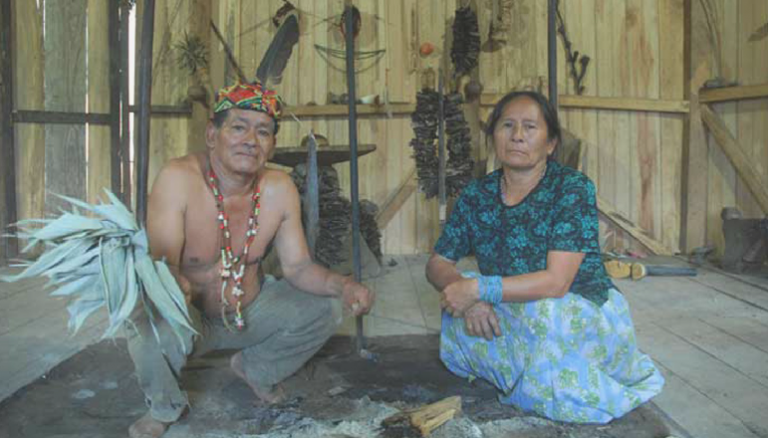 With the tremendous growing popularity of the Holy Brew of Amazon which helps one meet the Holy and Divine Mother Ayahuasca, there has been growing attention given to the conductors of these sacred ceremonies, especially when used in setting which is not religious – the conductors are called ‘Shamans’. So who are they? What is their origin, history, role, and responsibility?

“Because it is not an organized religion as such, but rather a spiritual practice, shamanism cuts across all faiths and creeds, reaching deep levels of ancestral memory. As a primal belief system, which precedes established religion, it has its own symbolism and cosmology, inhabited by beings, gods, and totems, who display similar characteristics although they appear in various forms, depending upon their places of origin.”

Who is a Shaman

According to Wikipedia, the word shamanism probably derived from the Tungusic word šaman, meaning “one who knows”. A female shaman is sometimes called a shamanka. the Sanskrit word śramaṇa, designating a wandering monastic or holy figure, has spread to many Central Asian languages along with Buddhism and could be the ultimate origin of the Tungusic word.

Shaman is a considered as a spiritually enlightened person able to work with the spirit realm. As described by Stanley Krippner, the famed American psychologist and a pioneer of the research on consciousness, “community-assigned magico-religious professionals who deliberately alter their consciousness in order to obtain information from the ‘Spirit world.’ They use this knowledge and power to help and to heal members of their community, as well as the community as a whole.”

As Christina Pratt mentions in The Encyclopedia of Shamanism, a shaman is a practitioner who has gained mastery of:

The powers expected of the Shamans are unique in that they are able to travel to non-ordinary realms, and also able to use their relationship with Spirits to cause changes which manifest in the physical real world, which include healing individuals and the community. This differentiates Shamans from mediums, sorcerers etc.

In the Yogic Culture and Traditions from India, certain types of Yogic activities are similar to the activities of Shamans from other communities.

Generally, the Shaman, as a Healer, can be is able to use alternate state of consciousness to enter other non-ordinary worlds, that affect people in ordinary world. Shamans are said to be able to work in worlds which include the spiritual, emotional, mental, mythical, archetypal, and dream worlds.

Role of Shamans in Ceremonies

In the Amazons, a Shaman conducts Sacred Ceremonies
where Holy Medicine is taken to meet the Holy and Divine Mother Ayahuasca.

The Energies managed by a Shaman during a Ceremony

The Energies in the Other Realm

Phases a participant goes through before, during and after a Sacred Ceremony to meet the Holy and Divine Mother Ayahuasca

Use of Instruments and sounds in The Ritual

Researchers suggest that the History of Shamanism is as old as the history of humanity itself.

“We have decent evidence that shamanistic rituals may go very deep into history, and that these rituals might have had positive psychological effects,” says Rossano of Southeastern Louisiana University, whose theory appears in the February Cambridge Archaeological Journal.

Fossil records suggest that anatomically modern humans split from Neanderthals about 200,000 years ago when early humans practiced shamanistic meditation to help heal the sick, notes Rossano. Music and Dancing were a normal part of the life of ice age people with many examples from this period of flutes, bullroarers, idiophones (notched bones which were stroked with a stick or bone), shoulder blades of mammoths hit by a mallet, and other items obviously used for music. In addition, there was always the human voice, whistling, clapping hands and thighs to make both melody and rhythm. All these evidences suggest that our ancestors were significantly engaged with focus and trance inducing activities in their daily lives.

Shamanism is a religious or spiritual practice found in cultures from all over the world from ancient times which exists till the present day with modern Shamans – referred to as Neo-Shamans. Shamans are considered to have access to Spiritual Realms and known to operate from altered state of consciousness. Shamanism is It is found by researchers that many religions like Buddhism and Christianity comes from Shamanic roots. Shamanism itself is not formalized system with any specific beliefs or ideology. The Shamanic practices coexists over millennia with various governments, cultures, and organized religious practices. In the traditions of the Amazons, a Shaman is said to have Four Legs as follows:-

In the cultures where Shamanism were practices, all the adults were held responsible for their relationships with the spiritual energies, including the energies of their home environment which include their geography, animals, and plant life, and their ancestors, their own personal helping spirits, and Spirit, the creator force.

New groups have sprung up in the Amazons as well as other places in the world, who are classified as the Neo-Shamans. For some, Shamanic practices have been a part of their dominant culture. Some intuitively seek guidance from a Shaman, often when all other options have been exhausted.

Nowadays, Shamanism has being studied and is practiced as a way of life in various places where individuals may seek a relationship with Spirit in all things. They also seek information and guidance from non-ordinary reality to change their lives. This sort of perspective does not inherently contradict with any religion that allows followers to attain relationship directly with a Higher Power, or a Source of Creation, or Avatars, or God – whichever term or definition may be Used.

In ancient times as people used to consult with the Shamans for spiritual and general guidance and healing, similarly in modern times people consult the Neo-Shamans for various reasons ranging from life challenges, illnesses, professional challenges, family problems and many more.

The Shamans work from a ecstatic trance-like state, and travels to realms of invisible world, where they make changes which impact healing and life of individuals and communities in the ordinary real life. Thus, Shamans, as they have been with humanity since ancient times still remain as Neo-Shamans.

There are generally three categories that Shamans fall into as Healers:

Types of Shamans in the Andes and in the Amazon of Peru:-