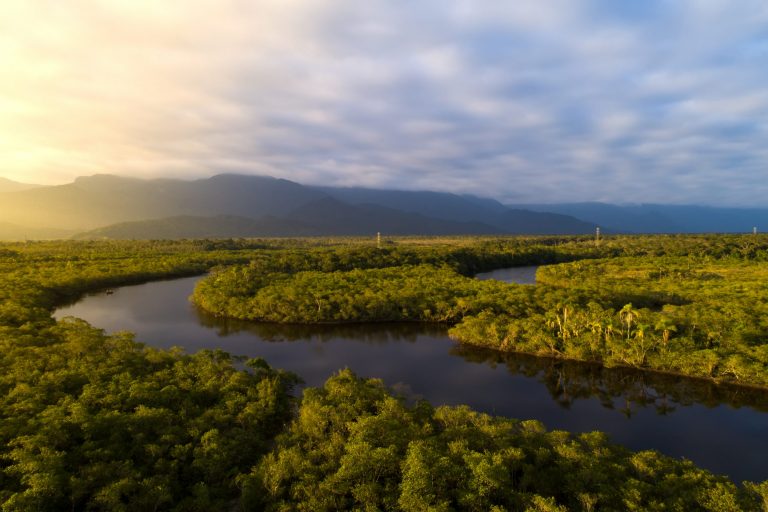 The Amazons is the largest rainforest on Earth can be found in the Amazon River Basin. The basin is roughly the same size as that of Australia, or the forty-eight contiguous United States that covers some 40 percent of the South American continent, which includes parts of eight South American countries: Brazil, Bolivia, Ecuador, Peru, Colombia, Guyana, Venezuela, and Suriname, as well as French Guiana, a department of France.

The Amazon River system is the lifeline of this rainforest, and its history plays an important part in developing its rainforests. The Amazon River is the world’s largest river in discharge and the second-longest river in the world. There are more than 1,100 tributaries of this river, 17 of which are longer than one thousand miles, and two of them are larger than the Congo River.

This whole rainforest includes territory belonging to nine nations and 3,334 formally known indigenous communities.  60% of the forest is contained within Brazil, followed by 13% of the forest in Peru, 10% in Colombia, and minor amounts in Bolivia, French Guiana, Ecuador, Guyana, Venezuela, and Suriname.

The Amazon represents more than half of the planet’s surviving rainforests and is one of the most biodiverse tracts of tropical rainforest in the world, with an estimated 16,000 species of Trees. Moreover, the animals in the Amazon Rainforest are much diverse than the animals found on other places on the Earth. These rare species include Jaguar, Giant Otters, Golden Lion Tamarin, White-cheeked Spider Monkey, the Uakari Monkey, the Amazon River Dolphins, Hyacinth Macaw, and many animals which are yet to be discovered.

The History of the Amazon Rainforest

As part of a proto-Congo River system, at one time, the Amazon River flowed westward when the continents were connected as part of Gondwana. Fifteen million years ago, by the collision of the Nezca plate with the South American plate, the Andes were formed. The linkage of Guyana and the Brazilian bedrock shields and the Andes’ rise blocked the Amazon River and caused the river to become a vast inland sea. Eventually, this inland sea became a massive swampy and freshwater lake that was soon the marine inhabitants adapted to life in freshwater.

About ten million years ago, the trapped waters worked through the sandstone to the west, and the river Amazon began to flow eastward. Around this time, the Amazon rainforest was born. When it was the time of the Ice Age, due to drop in the sea levels, trapped water in the Amazon Lake drained rapidly and gradually became a river that we now know as the Amazon River. Three million years later, the ocean level dropped down enough to expose the Central American neck and allowed mass migration of various mammalian species between the Americas.

During the mid-Eocene, it is assumed that the Purus Arch split the drainage basin of the Amazons along the middle of the continent. Water on the western side flowed toward the Atlantic, while to the east, water flowed toward the Pacific across the Amazonas Basin. For the rising of the Andes Mountains, a large basin was created that fenced a lake, now known as Solimoes Basin.

The Ice Ages caused tropical Rainforests around the world to pull back from growing. Though debated, it is believed that much of the Amazon returned to Montane and Savanna Forest. Savanna divided covers of Rainforests into islands and separated existing species for periods long enough to allow genetic differentiation. After the Ice Age ended, the forest was rejoined, and the species that were once diverged significantly enough to constitute designation as separate species, adding to the tremendous diversity of the area.

Human activity in the Amazon Rainforest

Based on archaeological evidence from a recent excavation at Caverna da Pedra Pintada, at least 11,200 years ago, humans settled in the Amazon region. Subsequent development led to late prehistoric settlements along the edges of the forest by AD 1250, which brought alterations in the forest cover. The notion of an untouched Amazon is largely the result of the population crash following the entrance of the Europeans in the sixteenth century.

New studies are suggesting that 11.8 percent of the Amazon’s terra Firme forests are manmade in nature, consequential from the careful management of biodiversity by indigenous people. Though, unlike those using current cultivation methods, these Amazonians were attuned to the ecological realities of their own environment from five millennia of experimentation, and they understood how to sustainably manage the Rainforest and fulfil their needs. They realized the importance of maintaining biodiversity through a mosaic of natural forests, open areas, and sections of forest designed so as to be dominated by species of special interest to humans.

Many of these communities existed along whitewater rivers where they had excellent transportation systems, fertile floodplain soils for agriculture, and excellent fishing. However, on arrival of the Europeans, these communities were the first settlements to be affected by the sickness that they brought since Europeans used the major rivers as main entry to the interior of the Amazons. Around the first century of European presence, the indigenous population was reduced by 90 percent. Most of the remaining communities lived in the interior of the forest: either pushed there by the invaders or traditionally living there in smaller communities.

Francisco de Orellana was the first European who travelled the full length of the Amazon River. From the documentary ‘Unnatural Histories’ by BBC, it is evident that Orellana did not exaggerate when he claimed that a complex civilization was flourishing along Amazon in the 1540s. Now it is believed that this civilization was later devastated by the spread of diseases which came from Europe, such as smallpox.

At the present time, despite the population decimation, indigenous communities still live in the Amazon Rainforest. In a way, all indigenous communities of the Forest have been affected by the outside world. Instead of wearing traditional loincloths, most indigenous people are now wearing western clothes, and many of them are using metal pans, utensils, and pots in their daily life. Some communities like the Shipibo make handicrafts to sell to tourists, while others go to the city to work.

Almost none of the native communities are dependent on traditional nomadic hunting and gathering only. They all cultivate crops, while hunting, gathering, and fishing remain as secondary sources of food. Generally, an indigenous family has two gardens of their own, one of them is a small house garden with a variety of plants for eating and daily usages; another one is a larger plantation which may be one hectare in area planted with manioc, bananas, or rice. These plantations are created through the traditional method of slash and burn, or Chacra, a practice of forest clearing that is not that damaging to the forest if conducted in the controlled traditional manner.

Biodiversity of the Amazon Rainforest

Moist tropical and subtropical Rainforests are the most species-rich biome, and tropical forests in South America are consistently more species-rich than other moist forests in Africa and Asia. As the largest area of tropical rainforest in South America, the Amazonian Rainforests have unparalleled biodiversity. One in ten known species in the world lives in the Amazon Rainforest. This creates the largest collection of living animal and plant species in the world.

Amazon is home to about 2.5 million insect species, with tens of thousands of Plants and some 2,000 mammals and birds. To date, at least 2,200 fishes, 40,000 Plant species, 1,294 birds, 427 mammals, and 428 amphibians have been scientifically classified in the region. One in five fish species live in Amazonian Rivers and Streams, and one in five of all bird species is found in the Amazon Rainforest. Scientists have labelled between 96,660 and 128,843 invertebrate species in Brazil alone.

The biodiversity of Plant species is the highest in the Amazon Rainforest; with one recent study, it is found that a quarter square kilometre (62 acres) of Ecuadorian rainforest provides more than 1,100 Tree species. A study in 1999 found one square kilometre (247 acres) of Amazon Rainforest can hold about 90,790 tons of living Plants. The average Plant biomass is estimated at 356 ± 47 tons per hectare. To date, an estimated 438,000 species of Plants of economic and social interest have been registered in the region, with many more remaining to be discovered or catalogued. The total number of Tree species in the region is estimated to be 16,000.