The Ancient Roots of Shamanism

Shamanism represents widespread and an ancient methodological system of healing the mind and body. According to archaeological findings and ethnological evidence, shamanic roots go back to at least 20,000 or 30,000 years. Researchers suggest that the History of Shamanism is as old as the history of humanity itself. “We have decent evidence that shamanistic rituals may go very deep into history, and that these rituals might have had positive psychological effects,” says Rossano of Southeastern Louisiana University, whose theory appears in the February Cambridge Archaeological Journal. Fossil records suggest that anatomically modern humans split from Neanderthals about 200,000 years ago when early humans practiced shamanistic meditation to help heal the sick, notes Rossano. Music and Dancing were a normal part of the life of ice age people with many examples from this period of flutes, bullroarers, idiophones (notched bones which were stroked with a stick or bone), shoulder blades of mammoths hit by a mallet, and other items obviously used for music. In addition, there was always the human voice, whistling, clapping hands and thighs to make both melody and rhythm. All these evidences suggest that our ancestors were significantly engaged with focus and trance inducing activities in their daily lives. 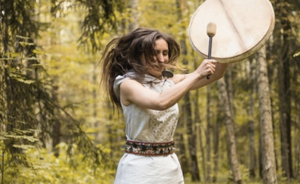 Shamanic knowledge and wisdom seem to survive through people who had primitive cultures, which was acquired over hundreds or thousands of human generations. The methods taught by shamans have been painstakingly learned and utilised for maintaining health and strength, to survive serious illnesses, and deal with threat or trauma of death.

Shamans are the custodians of the ancient methods, as very few cultures have left written records. The living representatives retain such ancient knowledge from whom such can be learned.

Experts and researchers have found it fascinating that remote parts of the planet have very similar and widespread assumptions about shamanism, from aboriginal Australia, native North and South America, Siberia, Central Asia, eastern and northernmost Europe, to southern Africa.

Even in historical literature from the classical Mediterranean, or from medieval and Renaissance western Europe – evidence showed same basic shamanic knowledge existing everywhere, until largely eradicated by Inquisitions.

One anthropologist notes: “Wherever shamanism is still encountered today, whether in Asia, Australia, Africa, or North and South America, the shaman functions fundamentally in much the same way and with similar techniques – as guardian of the psychic and ecological equilibrium of his group and its members, as intermediary between the seen and the unseen worlds, as master of spirits, as supernatural curer, etc.” The shaman can “transcend the human condition and pass freely back and forth through the different cosmological planes…”

The remarkable worldwide consistence in basic shamanic knowledge has been reported and studied by many anthropologists. The widespread similarities in shamanic methods and beliefs from much of the world has been extensively documented by Eliade in his classic book, Shamanism.

The shamanic ‘ways’ are similar in form, in primitive cultures which otherwise represented radically different adaptations to contrasting environments and to distinctly different problems of material survival. Through the migrations in prehistory, and isolated living by communities, many groups separated from others for 10,000-20,000 years.

Experts suggest that the reason that shamanic knowledge is so basically consistent in different parts of the primitive world is because “it simply worked!”, and therefore, did not require any change. Over thousands of years, through trial and error, people in ecological and cultural circumstances came to same conclusions as to basic principles and methods of healing.

It is also assumed by some experts, that shamanism flourished in ancient cultures which lacked technological innovations of modern medicine, which compelled their members to find alternative ways to survive, heal and help their communities. However, traditions such as shamanism existed in highly right cultures like Ancient India, with the yogic lineage.

Shamanism is referred to as the art of connecting with and contacting the spirit worlds to help heal the sick and support the community in various ways. There are diverse methods and techniques which have been passed down through generations. It is a wonder that such traditions can have such tremendous similarity high very diverse regions- which stands as proof and evidence that shamanic wisdom and knowledge have the same roots, going back in history – and did not need to change much as many of their teachings were universal and timeless.

However, shamans in specific regions are considered to be unique and to have evolved or received special knowledge – which they had uniquely carried forward. For example, in the Amazons, shamans are known to have received Holy knowledge from the Holy Plant Teachers, on how to prepare the Holy Medicine of the Holy and Divine Mother Ayahuasca.

Although, in history, there are records of “Holy Drinks”, whose description very closely match with the Holy Medicine. The “Haoma” and “Soma” were referred to as the “drink of the Gods” which are often thought to be the Holy Medicine, only at a different time and culture. Such similarities are fascinating for researchers and students of shamanism to find.