The different Amazonian communities with traditions of consuming the Holy Medicine 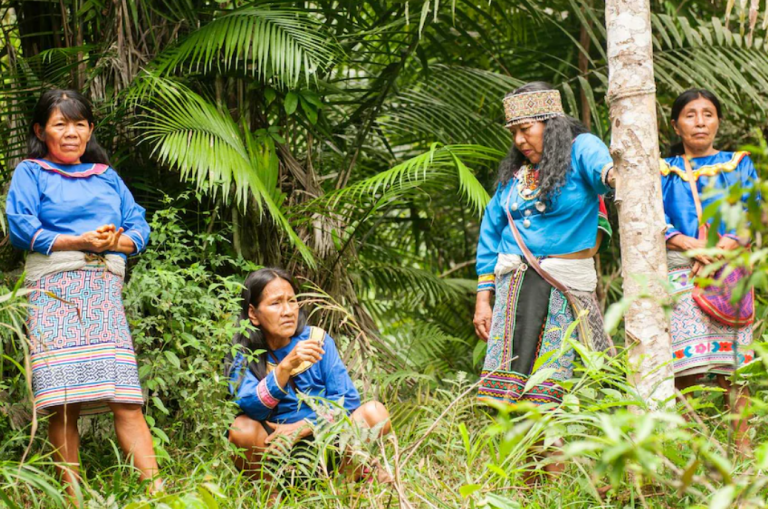 Though there are various mysteries around the origin of the Holy Medicine, evidence strongly suggests that the Napo is the place of origin both of the cultural complex that is now known as “Ayahuasca Shamanism” and the Holy Banisteriopsis Caapi Vine, which is the main ingredient of the Holy Medicine. Indigenous Shamans from the North and researchers alike point to the Napo as the place of origin. Brabec de Mori, in his research ‘Tracing Hallucinations,’ says, “Among most researchers, there is a consensus that an ‘origin’ of the Holy Medicine, however remote it may be, should be located in the western Amazonian lowlands around the Rio Napo.” A document, published by the Union of Yagé Healers of Colombia (UMIYAC), from the point of view of Colombian indigenous shamans, Napo is the origin of the Holy Banisteriopsis Caapi vine.

Colombian anthropologist German Zuluaga locates the origin of the Holy Medicine or Yagé in the “Refugio” of Napo, which includes the region from the Napo River to the Putumayo.

The Holy Medicine is also used by several indigenous tribes outside of this area of traditional usage: the Tschila and Chachi or the northern coast of Ecuador, some Guarani groups in eastern Bolivia, the Choco of north-western Colombia near the Panama border, and the Embera of western Colombia, which may have adopted the Holy Medicine in modern times.

Here are some of the known Amazonian communities who are traditionally consuming the Holy Medicine.

The Aguaruna people, endemically known as Awajun, are an indigenous tribe of the Peruvian jungle. Traditionally they lived on the Maranon River in northern Peru around the border with Ecuador and several of the Maranon’s tributaries, the rivers Nieva, Santiago, Numpatakay, Chiriaco, and Cenepa. Currently, they have titled community lands in four of Peru’s regions: Cajamarca, Amazonas, San Martin, and Loreto. A significant number of Aguaruna people also live in the Alto Mayo river basin. They have their own language, and they are mainly hunter gatherers, but they also cultivate.

The real origin of the Awajun people is still a mystery. Studying the racial characteristics of the majority, some anthropologists indicate that they are emigrants of Central America who arrived either by the coast or through rivers. Others believe that they came down the Andes centuries ago and evolved themselves to the geographical conditions of the region.

The Awajún have a traditional, material, and ideological culture. Unlike many other tribes in what is now Peru, the Awajun were never successfully conquered by the Inca. The Spanish conquistadors first met the Awajun in 1549 when Santa Maria de Nieva and the towns of Jaen de Bracamoros were found.

The Awajuns traditionally believed in many spirits and mythological figures such as Nugkui or the Mother Earth, Pachamama who provides the clay for ceramics and ensures agricultural success; Zeus or the Sun; Tsuki, water spirits who move in the rivers; and Bikut or the father Shaman, who transformed himself into the Holy plants such as the Holy Banisteriopsis Caapi Vine, main ingredient of the Holy Medicine, to communicate with the Holy and Divine Mother Ayahuasca.

Young men of the tribe traditionally consumed the Holy Medicine for the visions. They believe that these visions are the soul of dead warriors, and if the young man showed no fear, he would receive spirit power famously known as Ajutap. A man with such spiritual power would be invincible in the battle.

Amazonian Kichwas is a grouping of indigenous Kichwa peoples around the Ecuadorian Amazon, with some minor groups across the borders of Peru and Colombia. Amazonian Kichwas is the combination of different ethnic peoples, including Napo Kichwas or Napo Runa as they call themselves, living in the Sucumbios and Napo provinces, and Canelos Kichwa, also known as Kichwa del Pastaza or Pastaza Runa living in the Pastaza Province. There are approximately 419 organized tribes of the Amazonian Kichwas.

It is believed to be that the original ancestors of the Kichwa are the Quijos. In the 1400s, the Incas first found them and started fighting with them for the resources such as gold, cinnamon, and fur. By the 1500s, most of Ecuador was part of the Inca empire. In 1533, after the decline of the Incan empire, Francisco Orellana, the second in command, continued to conquer the Napo River and discovered the ancestors of the Kichwas were living near the Amazon River.

According to the Kichwas, the idea of owning natural resources or nature is not ideal, and that goes against their beliefs. They are deeply rooted in their spiritual and cultural connection to Mother Earth. They have a strong bond with the forest and the animal living among them.  The Napo Runa believe plants, humans, and animals all have souls and are almost regarded as equals. The Souls of P:lants are particularly taken, especially because the wellbeing of a tribe depends on a healthy relationship with nature.

The spiritual understandings and experiences can be seen through everyday rituals such as singing or storytelling, which include the former lives of animals, plants, birds, and inanimate objects, as well as accounts of spirit protectors of the rivers and forest. Analysis of those ritual songs reveal that Plant species evolved from a former human state.

The Shipibo-Conibo are indigenous people living around the Ucayali River in the Amazon rainforest in Peru. Formerly two tribes, the Shipibo and Conibo, eventually merged into one distinct tribe through communal rituals and intermarriage and are now known as the Shipibo-Conibo tribe. The population of this combined tribe is approximately 35,000, scattered over a huge area of Amazons in Peru, Ecuador, and Brazil, as well as Colombia. They have their own language called the Shipibo. The Shipibo are especially noted for a complex and rich cosmology, which is tied directly to the artefacts and art they produce.

Originally the Shipibo (apemen) and the Conibo (fishmen), the two tribes became one tribe to protect each other. In the Incan period, neither of the tribes were conquered by the Inca Empire, and even in the 17th Century they resisted the attempts at colonization from the Franciscan priests. During the nineteenth-century rubber boom, the Shipibo were employed as wage laborers and in agriculture and timber extraction for mestizo patrons (bosses) during this Century.

There is a blend of animism with Christianity among the Shipibo-Conibo people. Most of the accounts of spiritual concepts are often vague and vary among villages. Generally, it is believed that Gods and spirits reside in the sky, and there is a stairway that connects the Earth and sky along which the spirits pass. Under the influence of the Holy Medicine, one may climb this stairway and enter the spirit world. The Shipibo-Conibo refer to supernatural beings as Yoshinbo.

The Jivaroan peoples are the indigenous people around the headwaters of the Maranon River and its tributaries in eastern Ecuador and northern Peru. Their traditional way of life relies on hunting with blowguns and darts poisoned with curare and gardening. In the 16th Century, the Jivaroan people stopped the expansion of the Inca Empire into the Amazon and destroyed the Spanish conquistadors’ settlements. The population of the Jivaroan community is approximately 15,000 to 50,000 people. They have their own language, which has been derived from Quechua.

The Jivaro are an Andean tribe usually recognized as the most warlike people of South America. Their history of the past violent warriors goes back to the days of the expansion of the Inca Empire when they fought to remain free of Inca control. They also resisted the Spanish during the conquest, and in 1599 they massacred almost 50,000 Spaniards. One of the preferred warfare weapons used by Jivaro to fight the Europeans was the blowgun, using poisoned darts. In the centuries following the conquest, the Jivaro continued to fight assimilation into modern society, and they have resisted successive waves of missionaries.

The Jivaro have very rich mythology. A variety of ancient myths have been accepted through the generations to explain the origins of the Jivaro peoples. They have a polytheistic religious system. The Jivaro Goddess, Nungui, refers to the Mother Earth and the God, Tsungi, the God of Shamanism. The Jivaro also believe in a protective spirit named Arutam, which comes to them through spirit visions. This spirit thought to protect them from injury, death, and disease. The Jivaro God and Goddess are deeply connected to nature.

There are different creators and gods that explain the origins of man and animal, the occurrence of natural events, and relationships that exist in daily life. Their creation myths support their violent culture as “it is dominated by a series of battles among the gods and an essential duality of where people are the victims.”

The Holy Medicine ceremonies play a huge role in the Jivaro culture. By enchanting spirits, they create a healing ritual in these ceremonies.