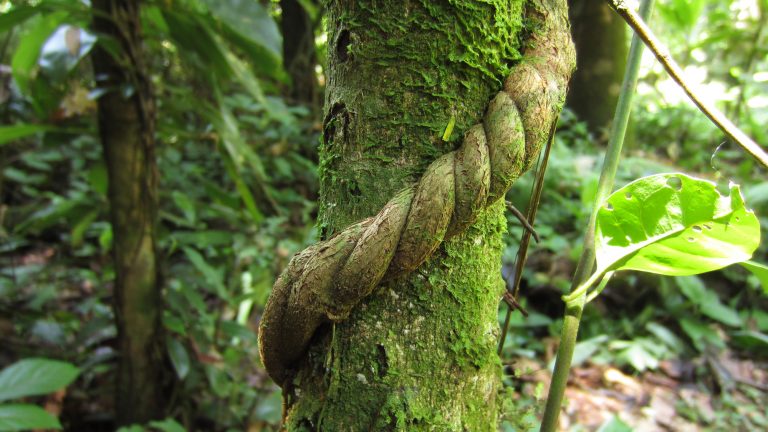 The Holy Banisteriopsis Caapi Vine, also referred to as Yage, or Caapi, is a South American Vine which is considered Holy, from the family of Malpighiaceae genus.

The Holy Banisteriopsis Caapi Vine is also most famously known for being the main ingredient of the Holy Medicine of the Holy and Divine Mother Ayahuasca.

The indigenous people of the Amazon Rainforest consider the Holy Banisteriopsis Caapi vine as “Plant Teacher” and consume throughout the whole region for various purposes.

In 2010, a study conducted by a group of researchers from the University of Mississippi identified additional alkaloids and named them— harmol, banistenoside A, and banistenoside B.

Proanthocyanidins: Two other active components are antioxidant flavanols called proanthocyanidins, and they are— epicatechin and procyanidin B2. According to scientists, these are also partly responsible for the Holy Banisteriopsis Caapi vine’s MAO-B inhibition.

What is Parkinson’s disease, and what causes it?

Parkinson’s disease (PD) is a nervous system-related disease that affects an individual’s ability to control body movement. The disease normally starts out slowly and worsens over time. If one has Parkinson’s disease, their body may shake involuntarily, may feel muscle stiffness, and face trouble while walking and maintaining their coordination and balance. As the disease worsens, one may have trouble sleeping, talking, have mental and memory problems, and experience behavioral changes with other symptoms.

According to scientists, about 10% to 15% of people with Parkinson’s disease may have a genetic mutation that influences the development of the disease. There are also environmental factors involved that are not completely understood by the current scientific world.

Parkinson’s disease occurs when neurons or nerve cells in an area of the brain known as the Substantia nigra become damaged or die. These cells usually produce dopamine, a chemical or neurotransmitter that helps the neurons of the brain transmit signals, “messages”, between different regions of the brain. When these nerve cells become damaged or die, they produce less dopamine than before. Dopamine is crucial for the operation of another region of the brain called the Basal ganglia. This region of the brain is responsible for organizing necessary commands for bodily movement. The loss of dopamine causes the movement symptoms observed in people with Parkinson’s disease.

People with Parkinson’s disease also lose another neurotransmitter called norepinephrine. This transmitter is needed for the proper functioning of the sympathetic nervous system. This system controls some of the body’s autonomic functions, such as heart rate, digestion, breathing, and blood pressure. Loss of norepinephrine causes some of the non-movement-related symptoms of Parkinson’s disease.

In 1928, Louis Lewin extracted an alkaloid which he named “Banisterine”. After several experimentations on monkeys and dogs, he described the results to the ethnologist Theodor Koch-Gruenberg who later self-administered harmine and reported changes of colour perception and mild hallucinations. Lewin then administered Banisterine subcutaneously (SC) to an obese patient who had hemiplegia and reported immediate improvement in her gait. Encouraged by this result, he then gave subcutaneous injections of 25 to 70 mg of Banisterine to patients with several different neurological diseases in the Neukoelln Hospital. He observed that some of the patients reported warmth, euphoria, and lightness of the limbs in some cases.

Given his observation that the Holy Banisteriopsis Caapi Vine can facilitate movement, Lewin speculated that the Banisterine might be efficacious in patients with paralysis agitans and postencephalitic parkinsonism. He was nearing retirement and suggested that two younger colleagues from Heidelberg, Karl Wilmans and Kurt Beringer, who had also been supplied with the Holy Banisteriopsis Caapi Vine samples, conduct the first empirical trials.

In 1958, Sidney Udenfriend and his research team demonstrated that harmine was a nonselective MAO inhibitor. In 1968, two subtypes of MAO inhibition type A and B, were identified. MAO-A inhibition has been shown to significantly shorten latency to onset and increase the duration of motor responses after a single dose of levodopa. Furthermore, and in contrast to MAO-B inhibition, MAO-A is also present within presynaptic dopaminergic terminals. In 1964, harmine was shown to antagonize reserpine-induced parkinsonism.

Nonselective monoamine inhibitors were reported to have antiparkinsonian effects in the early 1960s and to markedly enhance the therapeutic effects of low doses of L-dopa. Subsequent research, however, confirmed that they could not be used safely with L-dopa because of potentially dangerous hypertensive effects. The so-called “cheese effect,” an increase of blood pressure after consumption of tyramine-containing foods, was also observed in patients treated with clorgyline, an unselective and irreversible MAO type A inhibitor. Moclobemide is a reversible type A inhibitor that is free of “cheese effect” and has been reported in studies to have mild antiparkinsonian effects. Although moclobemide can also alleviate depression in Parkinson’s disease, the effects of MAO-A inhibitors have not been well studied. Caution is required when moclobemide is combined with antidepressants, given that it may cause serotonin syndrome, which would likely be a limitation of harmine in modern clinical practice.

In relation to the responses reported with harmine, it is also of interest that the datasheet for selegiline states that doses beyond 10 mg can worsen tremor. Many opinion leaders have also observed that both selegiline and the more recently marketed type B MAO inhibitor, rasagiline, can spectacularly improve some patients for many months, whereas other patients do not respond at all or notice worsening of tremor similar to the original observations with harmine.

In 2001, a few patients with Parkinson’s disease reported improvement of parkinsonism after the consumption of the Holy Medicine. Based on the assumption that the beneficial effects were likely to be owing to the Holy Banisteriopsis Caapi Vine, Marcos Serrano-Dueñas and his colleagues conducted a double-blind, controlled study. As a result of the study, in the active group, the Unified Parkinson Disease Rating Scale (UPDRS) part III motor scores improved significantly. Baseline UPDRS scores dropped from 54.4 to 41.4 after 60 minutes, 22.4 after 120 minutes, and 25.6 after 4 hours. However, in all patients, tremor at rest, as well as on action and on posture, worsened.

The pharmacological effects of harmine have been attributed mainly to its central monoamine oxidase (MAO) inhibitory properties, but in vivo and rodent studies conducted by M J Schwarz and Volodymyr Samoylenko have shown that extracts of the Holy Banisteriopsis Caapi Vine led to striatal dopamine release.

According to research conducted by Kevin J. Barnham in 2004, inhibition of MAO-B activity by beta-carbolines harmine and harmaline, in addition to potent MAO-A inhibition responsible for the antidepressant activity, provide protection against neurodegeneration and has a potential therapeutic value for the treatment of Parkinson’s diseases. In addition, oxidative stress induced by Reactive Oxygen species (ROS) has been strongly associated with the pathogenesis of neurodegenerative disorders, including Parkinson’s and Alzheimer’s disease. Therefore, the presence of two potent antioxidants, (−)-epicatechin and (−)-procyanidin B2, have significant added value for the protection of neuronal cells damaged by oxidative free radicals. In 2005, Wen-Chi Hou and colleagues, in a study about MAO-B inhibition, showed that their selective MAO-B inhibitory activity benefits them even more.

In 1997, W. Du, in a separate study, showed that harmine is also an N-methyl-d-aspartate (NMDA) receptor antagonist. Serrano-Dueñas, in his research, mentioned that some researchers speculated that the rapid improvement observed in Parkinson’s disease patients might be owing to these antiglutamatergic effects.

In 2014, Piyun Sun and his research team, in their rodent studies, have shown that harmine can also reduce cerebral infarct volume and neuronal cell death owing to upregulation of glutamate transporter 1, which attenuates excessive and neurotoxic glutamate levels, leading to speculation that harmine might also possess neuroprotective properties.

From countless research now, it is clear that one of the main reasons for Parkinson’s disease is the damaged or dead neuron cells in the brain. Besides isolated alkaloids of the Holy Banisteriopsis Caapi Vine, DMT— another Holy Medicine ingredient also has the potentiality to regenerate new neuron cells. And based on this, a group of researchers from Brazil researched the effects of the Holy Medicine on patients suffering from Parkinson’s disease published in 2020.

According to the result, the lower doses of the Holy Medicine stimulated neuronal cell reproduction and displayed the most effective neuroprotection profile, particularly by preventing neuronal damage and improving cell viability against 6-OHDA-induced toxicity. Intriguingly, the hydroalcoholic fractions demonstrated enhanced neuroprotective effects when compared to other samples and isolated alkaloids.