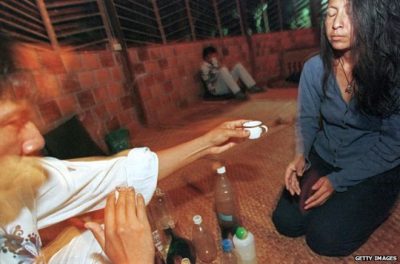 These Sacred Ceremonies are shrouded in secrecy because of the illegal status of DMT all over the world classed as a class-I narcotics, which is often with the Holy Medicine, coming from DMT containing admixtures.

The only way to participate in such Sacred Ceremonies seem to be by being in the inner circle with shamans who are traveling to the specific country or by taking information about the Shaman from a member who previously attended such a Sacred Ceremony.

Shamans say, when you are ready, the Holy and Divine Mother Ayahuasca comes to you or brings you to Her after preparing you for the experience.

For many years, shamans have been traveling to spread the Divine knowledge of the Holy and Divine Mother Ayahuasca all over the world.

Shaman Don Roberto is one of the shamans from the UK and has been traveling to Southeast Asian countries and has led several Sacred Ceremonies in Asia.

Referring to the secrecy surrounding the Holy Medicine, Don Roberto said to the South China Morning Post, “The pattern of activity in Asia is part of a global pattern,” he also added that, “Even though we cannot do any advertising in Asia, we see an increasing interest in the Holy Medicine and Sacred Ceremonies, especially in Countries with culture which accepts and embraces the concept of spirituality and ‘Healing’, as well as in countries where subcultures thrive.”

According to Roberto, it is regrettable that traditionally prepared naturally occurring Plant-derived DMT is still listed as the Schedule-I drug and that the agreement has not been revised since 1971 after so many studies and researches have proven beyond doubt, the Holy Medicine does not pose a risk to the public health; rather, research suggests that the Holy Medicine provides substantial benefits for people’s mental and physical health if used in a controlled and safe context.

Another aspiring shaman Karen Farini who is from Britain, after attending no less than 16 Sacred Ceremonies in Asia, including in India, between 2016 and 2018, felt a calling to go deeper. According to her experiences, the Holy and Divine Mother Ayahuasca told her that this was her path, and she felt such from deep within. Farini said, she suddenly wanted to get rid of her belongings and the house she lived in, and just follow the call far away to see where it might lead. Studying the Holy Medicine is a very challenging and difficult process, as she says she soon discovered in Peru,

After struggling with depression and anxiety for years, Beijing resident Penny Atkinson tried various conventional treatments such as antidepressants, but nothing helped her. Listening to one of her friend’s recommendations, she decided to research on the Holy Medicine of the Holy and Divine Mother Ayahuasca. She was recommended with the Hummingbird Healing Center in Iquitos, Peru, where she signed up for a 12-day retreat program which included six Sacred Ceremonies.

Currently, the Sacred Ceremonies are an open secret in Asian countries like Thailand and the Philippines, where thousands of Westerners come to visit and relax.

Fortunately, colonization of the Holy Medicine has created this flourishing of the Sacred Ceremonies which  is now available in many countries where most of the people of these countries are not aware of the Holy Medicine. Many, without proper knowledge, are treating the Holy Medicine like a  Psychedelic trip. Observing this tendency, Roberto advised that, it is vital that people are well-informed and never go to a retreat to seek entertainment. As for shamans, many people think it’s enough to play a bit of guitar and prepare the Holy Medicine, but so many skills and so much depth go into the preparation to become a shaman, which requires great discipline and sacrifice.