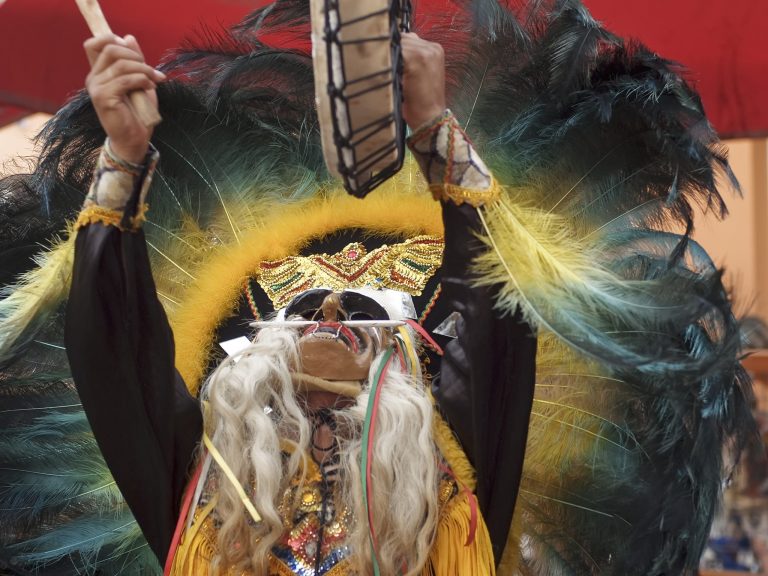 As Carl Laderman and Marina Roseman puts it “All medical encounters, no matter how mundane are dramatic episodes.” In that context, a parallel can be drawn between American doctors and mestizo shamans from the Amazons. Both perform healing rituals involving interaction with the patient’s body, in dramatic stages.

American doctors performance. It can be compared with the American doctor, who wears white coat, the surgical scrubs, the stethoscope casually dropped in the neck, the serious demeanor, the studied frown, the authoritative issuing of orders, with the patient wearing special healing clothes.

Shamanic performance: The shaman perform healings performance. It involves performance with music, movement, props, plots, comedy, poetry, and dialogue, with performance designed to engage and affect audiences. Shamanism, as Historian Ronald Hutton, involves theatrical performance where shamans are performing artists. Shamanism is partly a craft, partly spiritual vocation, and also an aspect of theatre, often a spectacularly successful one. Often, the performance is not a mere spectacle, but also a high drama, staged as a battle, with episodes of cure development, where the shaman struggles with the patient’s body and finds the disease and cast it out, descending into the underworld, in a perilous journey, struggling against more than human enemies waged by a person along with other-than human allies, ultimate confrontation, victory, triumphant return carrying a trophy – the illness, the magic dart, the envy and resentment, the disruption in the social fabric, sucked out of the body of the victim and spit, gagging, onto the ground.

Risk and mastery constitute the essence of the shamanic performance. The risk is to the patient who is being treated, if a greater and more powerful sorcerer turns upon the healer.

The below figure provides a simplified map of the dramatic field within which a typical shamanic healing performance may take place.

Figure: the field of the shamanic performance

The audience remains throughout performance, stepping in an out, in a dynamic fashion. They may sing along with the Holy Icaros, assist, comment ,criticize, participate, and evaluate, occupying the stage with the shaman. They are critics of the shamanic performance, and a source of the future clients, and friends of enemies of the shaman and the patient. One of the audience members may even be the secret inflictor of the very harm which the shaman is trying to cure through the Sacred Ceremony for patient’s healing.

The spirits are also active participants whom the healer has built relationship with during years of interaction whom the shaman enlists as allies to heal the patient. The strength of the shaman may depend on the strength of the relationship between the spirit allies, who share the same ambiguity as the healer – agents of good, possessors of menacing powers, jealous, potentially arbitrary, capable of abandoning the healer to solitary defeat. The support from the spirit allies can mean the difference between successful and unsuccessful healing of the patient. They are that important!

The shamanic medicine involves personal engagement with the forces of sickness which afflicted the patient, where the shaman steps between the attacking spirit to do battle with it. The medicine of the healer fights sickness with weapons and the cunning of the sickness itself. The same Plants which may have caused the harm can be taken help of to revert the harm. The magical phlegm of the healer protects against illness.

The sickness, the community, healer and patient, ally and enemy, are all bound together in a great and uncertain struggle, a battle between trust and resentment that mirrors the struggle of the entire community. Like a drama in a performance – the healer, as ambiguous hero, maintains doubtful alliances, facing unknown enemy, threatened with retaliation and sickness, replying on skill, strength and knowledge with a potentially unknown outcome of the whole process till the end, till the patient achieves healing from illness.

Healing is often attributed in greater or lesser part to the personal qualities of a healer. However, not all shamans in the Amazons may be characterizable that way. Shamanism, as noted by anthropologist Stephen Hugh-Jones, is like acting or playing music- received knowledge and training combined with originality, skill and performance.

Each shaman has individual performing styles which can vary from performance to performance. Conventional Shamanic performance is a skill, which is transferable to a good degree. There are certain tricks which are often employed by many shamans, like conjuring, sleight of hand, poetry, gravitas, all aspects of the performing art.

Therefore, what are kinds of skills necessary for performer-healer to command in order for the role?

The following are often involved in typical mestizo shamanic training

Due to their spiritual nature of activities and performances it is normal that unspiritual societies may doubt or frown upon some of the traditional ways of how ‘Healing’ is performed and about the related traditions and heritage. A shamanic healing may be rife with uncertainty, ambiguity, and obscurity, filled with apparently meaningless elements, with communicative indeterminacy, where the Holy Icaros of the shaman may be incomprehensible languages, whistled, whispered, with the shaman’s interactions with the spirits, hidden, and his power seemingly dangerous and ambiguous.

A healing process of a mestizo shaman may contain quality of vividness, heightened experience, where, to the sufferer, the experience is an unforgettable, extraordinary event, fixed in memory as a singular time, with the shaman touching, sucking, with sounds and whispers, with penetrating smells and intestinal heavings, with all drama, where the body’s sickness is revealed and gradually healed.

The shamanic history is ancient, with many traditions and rituals, from all over the world. It is surprising that many rituals are very similar between communities very far apart in the world. For example, in India there are many rituals with yogis which are similar to rituals of mestizo shamans, giving rise to the possibility these traditions all may have a same root.