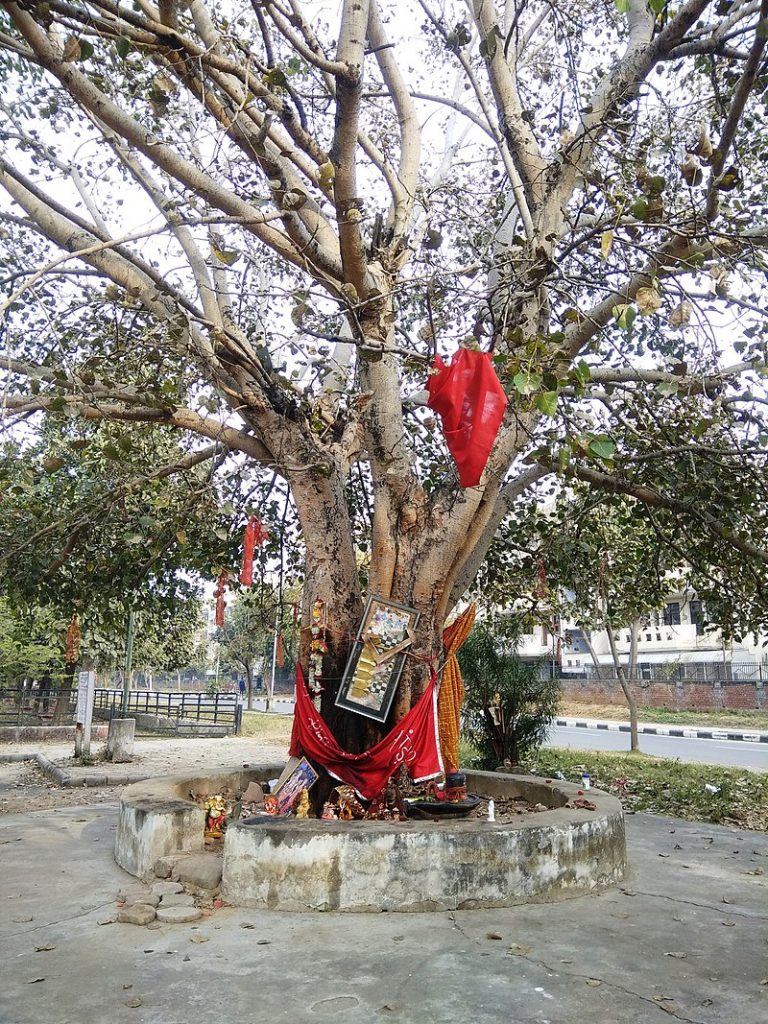 Humans have and ancient and intimate relationship with the Trees, depending on Trees for food, medicine, and even air. Besides, Trees have provided ‘wisdom’ to humans throughout history.

Trees have been considered Sacred and Divine in many cultures and are important and significant ‘symbols’ in world’s mythologies and traditions – such as the ‘Tree of the Good and Evil’ in Judaism, and the Banyan Tree, which is considered Sacred in Buddhism, Hinduism, and Jainism. Legend has it that Trees are the home of the spirits. Under the Banyan Tree, Buddha is said to have attained enlightenment. German mythologies and Celtic polytheism had cultic practices in Sacred Groves, like grove of Oak. The devotion and relationship with the Trees have been so Holy and ‘intimate’ that there is even a word in English – “Dendrolatry” – which is made from two words “dendro” which means ‘Tree’, and “–latry” which means ‘to worship’, literally meaning Tree Worship.

In Germany, Tree worship was so serious that there were laws that if someone peeled bark of a standing Tree, the naval of the culprit would be cut out and nailed to the part of the Tree which was peeled, while he/she was to be driven round and round the Tree till all his/her guts were wound about the trunk of the Tree. The intention was to replace the dead bark by living substitute – like for like.

The Lithuanians were converted to Christianity only around the 14th century, and at that period most of them were Tree Worshippers, with some revering remarkable Oaks and other great Shady Trees, from whom they received oracular guidance. They also believed whoever cut a bough of a Tree would either die suddenly or would be crippled in one limb.

Tree Worship has been prevalent in Italy and Greece. The sanctuary of Aesculapius at Cos had a penalty of a thousand drachms for anyone who could cut down the Cypress-Tree.

In Rome, the Sacred Fig-Tree of Romulus was worshipped until the fall of the empire. On the slope of the Palatine Hill there was a cornel-Tree which was esteemed as the most Sacred object of Rome.

Since ancient times, communities of humans have known that Trees were alive and that “slaughter of an ox or a sheep is the same as felling of a fir or an Oak, seeing that a soul is implanted in Trees…” as mentioned by an ancient vegetarian Porphyry. The North American Indians, Hidatsa, believed every natural object has a ‘spirit’.

Spirit of the Trees

The Wanika of Eastern Africa believed that  each and every Tree has ‘Spirit’ and that “the destruction of the cocoa-nut Tree is regarded as equivalent to matricide, because that Tree gives them life and nourishment, as a Mother does Her child.” The Siamese Buddhist monks will not break a branch even “as they will not break the arm of an innocent person.”

There are communities in Grbalj, Dalmatia, who believe that there are Trees which have been endowed with souls among the great beeches, Oaks, and other Trees, which if someone feels, must die on the spot, or live as an invalid for rest of their days. If a woodman believes he/she has felled such a Tree, they must cut off head of a live hen on the stump of the Tree with the very same axe, to protect against all harm. The silk-cotton Trees of West Africa reaches heights above all other Trees, and is regarded as the abode of the God or ‘Spirit’.

God of the Forest

Trees, when not viewed as the body of the Tree-Spirit, but as the abode which the ‘Spirit’ can quit at desire. Such beliefs had given rise from Animism to Polytheism, where the ‘Spirit’ could be understood to be able to transcend and take shape humans, as well as the Trees, by engaging or disengaging from a body. The sylvian religion depicts Deities as human shape with woodland characters denoted by a Tree branch or such similar symbol. Although in human shape, the powers exercises by the Tree-soul is incorporated in a Tree and continues to remain God of Trees. The Tree ‘Spirit’ is considered to be animate, and is believed to be the provider of rain, sunshine, multiply flocks and herds, and enable women to give childbirth easily. The mundaris in Assam believe that if a Tree in a Sacred Grove is felled, the Sylvan Gods shall be displeased and shall withhold rain.

Worshipping of the Trees

The largest Tamarind Tree near the village of Monyo, in Sagaing district of Upper Burma, was named the ‘Haunt of the Spirit (_nat_), as the God who is believed to control the rain. Then they made libations in the Tamarind Tree’s honour, after food was offered like bread, coco-nuts, plantains, and fowls, to the guardian ‘Spirit’ off the village and to the ‘Spirit’ of gave rain. Tree ‘Spirits’ are believed to make the crops grow, and the Mundaries in every village has a Sacred Grove, and the ‘Grove Deities’ are held responsible for the crops, and are especially honoured during great agricultural festivals.

The people of the Gold Coast sacrifice at the foot of ‘Specific’ Tall Trees, and believe that if any were felled all fruits of earth would perish.

The Gallas dance around Sacred Trees as couples and pray for a good harvest. Each man and woman remain linked by a stick, which each hold in one end while carrying green corn or grass underarms.

Swedish peasants stick leafy branch in furrow of their corn-fields, to ensure abundant crop, which is similar to the German and French custom of the Harvest-May, where the large branch or a Whole Tree, which is decked with ears of corn brought home on the last waggon from the harvest-field, embodies the Tree Spirit, conceived as the spirit of vegetation in general.

In Northern India, where it is believed that Tree ‘Spirit’ multiplies the herd and blesses women with offspring, on the 11th Month (Plalgun, in February), libation are poured at the food of the Tree, while red or a yellow string is bound around the trunk, and prayers are offered asking for fruitfulness of the women, animals and crops. In Northern India, coconut is considered a Sacred fruit and called ‘Sriphala’, i.e. the fruit of the ‘Sri’, who is the Goddess of prosperity, and is a symbol of fertility and was kept in shrines and presented by the priests to the Women who wanted to become Mothers.

In the town of Qua, near Old Calabar, there was a Palm Tree which provided conception to any Woman who were barren and who ate a nut from the branches.

In Europe, May-Tree or May-Pole has been believed to possess similar powers over Women and cattle. Peasants set up May-Trees or May-bushes near stables so cows would yield much milk.

The Circassians believed the Pear-Tree as the protector of cattle, and cut down young Pear-Tree in Forest to bring home and adore as Divinity. Almost each house had one Pear-Tree. During Autumn festival, the Tree is carried into the house ceremoniously with music, covering with candles, and fastening a cheese to the top, while they eat, drink and sing around the Tree and then say good-bye.

Tuhoe Tribe of Maoris believe that Trees make women fruitful. Barren women would hug such Trees and would receive male or female child depending on which side of the Tree they embraced.

In some places of Bavaria, Green Bushes are set up of newly-married pairs. South Slavonian barren women who want children places new chemise upon fruitful Tree on the eve of St. George’s Day. If the following morning she finds that some creature crept into the garment, she believes her wish will be fulfilled within one year, to be as fruitful as the Tree, and would wear the chemise.

Among the Kara Kirghiz, the barren Women roll on the ground under solitary apple Tree to bear offspring. In Sweden, and Africa, it is believed that Trees hold the power to easy delivery of child-birth. In districts of Sweden there would be a Lime, Ash or Elm – Guardian Tree in neighbourhood of every farm, and no one would pluck even a simple leaf of that Sacred Tree, in fear of illness or ill-luck. Pregnant Women would clasp the Tree to ensure an easy delivery. In certain Congo region tribes, pregnant Women would make garments from bark of certain Sacred Trees, believing the Tree will protect them from dangers of giving child-birth. The story from Greek Mythology holds that Leto clasped a Palm-Tree, Olive-Tree or two Laurel-Trees when giving birth to the Divine Twin Apollo and Artemis, reflecting the Greek belief that certain Trees facilitate delivery of children.

The Spirit of the Holy and Divine Mother Ayahuasca

The Amazonians have believed throughout ages that the Holy and Divine Mother Ayahuasca has been there since creation, and helps guide humanity forward. The Ancient Indus Valley civilization has accordingly worshipped the “Divine Mother” in the form of MahaKali, MahaLaksmi and MahaSarasati, and considers the Divine Mother as the ‘Creator’ and ‘Preserver’ of life.

The ‘Spirit’ of the Divine Mother is believed to be ‘beyond’ of any bodies, and all bodies, such as a Tree is Her abode only.