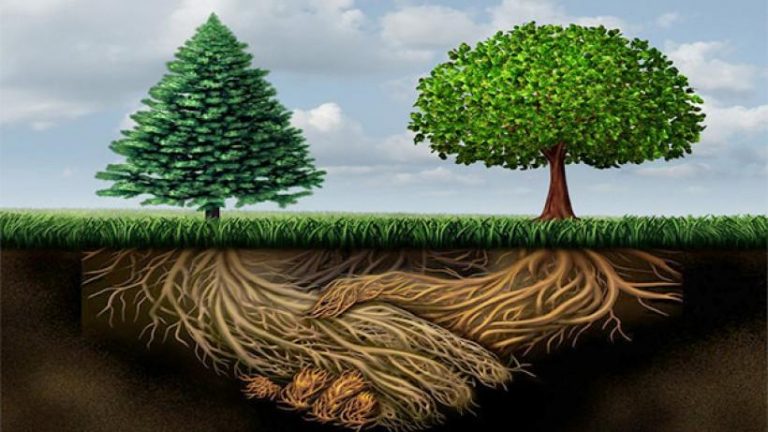 A profound revolution has been taking place in the scientific community in understanding of Trees in the recent times. Many scientists have changed their Darwinian beliefs of ‘survival of the fittest’ when thinking about Trees and Forests, and opting for a view which is more altruistic, more like social and socio-biological beings, like bees, wasps, ants, and humans.

“We’ve treated plants as inanimate objects that are there for our use and pleasure. But we haven’t treated them with respect, that they are sentient beings. If we can shift our thinking, and change our behaviour, that will then be beneficial for the plants and our forests.“

– Suzanne Simard, Prof. of Forest Ecology,
Dept’ of forest and conservation sciences at the University of British Columbia

Humans have considered Trees as disconnected loners, striving and competing for water, sunlight, and nutrients – with the winners absorbing out the losers and sucking them dry. The timber industry, in particular, looks at Forests as wood-providing systems and battlefields for the survival of the fittest. However, this old and rudimentary way of viewing such complex and wonderful macrocosm – such as a Forest – have been changing over the years; Modern scientific research and studies show that Trees can communicate in a much deeper level and in much more complex ways than humans had ever imagined.

Two decades ago, ecologist Suzanne Simard, while researching her doctoral thesis, discovered that Trees communicate their needs, send each other food essences like carbon via a vast network of latticed fungi buried in the soil – practically she found that they talk with each other like humans. In her words, all Trees are “social beings” which communicate with each other in cooperative ways, and have created a massive underground social network which they use to communicate with each other. “Some are calling it the ‘wood-wide web’”, says Peter Wohlleben, a forester and the author of ‘The Hidden Life of Trees: What They Feel, How They Communicate.’ Scientists call these mycorrhizal networks. The main connector that forms the basic links of the network is the microscopic fungal filaments which join together the fine, hairlike roots of Trees.

The Symbiotic relation between Trees and Fungi

There is a symbiotic relationship between Trees and Fungi, more like an economic exchange and a win-win situation. As the Fungi search for and collect sugar from the Trees, they produce phosphorus, nitrogen, and other mineral nutrients in the soil, which are then absorbed and consumed by the Trees. Against this efforts by the Fungi, they consume around 30% of the food essence or the sugar which Trees photosynthesize from sunlight.

In one of her studies with Paper Birch and Douglas Fir Trees, Suzanne Simard used radioactive isotopes of carbon to determine that both Paper Birch and Douglas Fir Trees were using an underground network to interact between themselves. According to Suzanne, all the Trees in the world have a symbiotic association with below-ground Fungi. The Fungi which are beneficial to the Plants, and as they cannot photosynthesize, explores the soil by sending mycelium or threads through the soil, picking up nutrients and water, especially phosphorous and nitrogen, and bringing them back to the Plant. The Plant then receives those nutrients and water and provides sugar or other substance made by photosynthesis to the Fungi. The situation works out well for both Fungi and Trees in the symbiotic relationship.

This network is sort of like a below-ground pipeline which connects one Tree root system with another Tree root system so that nutrients, carbon and water can be exchanged between the Trees. In a natural forest of British Columbia, Paper Birch and Douglas Fir grow together in early successional Forest communities. Although they may compete with each other, they also cooperate with one another by sending nutrients and carbon back and forth through their mycorrhizal networks. Suzzanne explained that, this back-and-forth exchange depends on the ecological factors which are going on at that time. One of the important things that she and her team tested in that particular experiment was shading. The more Douglas Fir became shaded in the summertime, the more excess carbon which the Birch had went to the Fir. Then later in the fall, when the Birch was losing its leaves, and the Fir had excess carbon due to the Fir still photosynthesizing, the net transfer of this exchange went back to the Birch.

Through molecular tools, she and one of her graduate students discovered that there are main Hub Trees or Mother Trees, that all of the Trees essentially, with a few isolated exceptions, were linked together through these Mother Trees. They found that the Oldest and the Biggest Trees in the network were most well connected, whereas smaller Trees were not connected to as many Other Trees. Big Old Trees with bigger root systems associate with bigger Mycorrhizal Networks. They have more carbon flowing into the network as they have more root tips. So, it makes sense that they would have more connections to Other Trees all around them.

In later experiments, they had been pursuing whether these Older Trees can recognize kin, whether the seedlings which were regenerating around them are of the same kin, whether they are offspring or not, and whether they can favor those seedlings — and they found that the Trees can. That is how they came up with the term “Mother Tree” because they are the Biggest, Oldest Trees, which nurtured their kin.

Scientists’ limitations and observations of Trees

In 1997, when she first published her works, she wasn’t supposed to use the word “communication” when it came to Plants. Later she explained that she had always been very aware of following the scientific method and being very careful not to go beyond what the data says. But according to her experiences with the research of Trees, there comes the point when someone realizes that that sort of traditional scientific method only goes so far, and there is so much more going on in the Forest than could be understood using the traditional scientific techniques.

So, she opened her mind up and realized that she needed to bring in the human aspect to this to understand deeper, more viscerally, what is going on in these Living Beings. So, according to her understanding, using the language of communication made more sense because it is not just resource transfer, but things like kin recognition signaling, defense signaling, the behavior of Plants, the senders, and the receivers, those behaviors are modified according to this movement of stuff between them.

Forest Trees have evolved to live in cooperative harmony, interdependent relationships, maintained by communication and a collective intelligence similar to an insect colony. Monica Gagliano at the University of Western Australia gathered evidence that some Plants may also emit and detect sounds, particularly crackling noise in the roots at a frequency of 220 hertz, inaudible to humans.

Peter Wohlleben, while talking about how differently Trees can communicate, gave one of his favorite examples that happen in the savannas of sub-Saharan Africa, where the Wide-Crowned Umbrella Thorn Acacia grows. When a giraffe starts chewing Acacia leaves, the Tree notices the injury and emits a distress signal in the form of ethylene gas. Upon detecting this gas, neighboring Acacias start pumping tannins into their leaves. In large enough quantities, these compounds can sicken or even kill large herbivores. Giraffes are aware of this; however, they have evolved with Acacias, and this is why they browse into the wind, so the warning gas doesn’t reach the Trees ahead of them. If there’s no wind, a giraffe will typically walk 100 yards— further than ethylene gas can travel in still air—before feeding on the next Acacia. So, giraffes, one can say, know that the Trees talk with each other.

A recent study from Leipzig University and the German Centre for Integrative Biodiversity Research shows that Trees know the taste of deer saliva. “When a deer is biting a branch, the Tree brings defending chemicals to make the leaves taste bad,” he says. “When a human breaks the branch with hands, the Trees know the difference and brings in substances to heal the wound.”

As many scientists have no knowledge or experience of experiential dimensions or of Sacred Ceremonies where the Holy Medicine of the Holy and Divine Mother Ayahuasca is consumed, not all scientists are being able to understand the new claims being made about Trees – that Trees can communicate just like humans. Although Simard sees collaboration and sharing, her critics see random, selfish, and opportunistic exchanges between the Trees, which is a result of the ignorance of those critics. Stephen Woodward, a botanist from the University of Aberdeen in Scotland, warns against the idea that Trees under insect attack are communicating with one another, at least in the way humans interpret, saying “They’re not firing those signals to anything. They’re emitting distress chemicals. Other trees are picking it up. There’s no intention to warn.” Some scientists are still confused whether Trees are conscious or whether Trees have ‘Will’ or ‘Intention’. Although, at the same time, scientists still cannot prove whether a human being is sentient or not – as they have no way to ascertain the existence of ‘conscious experience’. Many scientists believe Trees solve problems, but it is all under hormonal control, and it all evolved through natural selection.

From such confusion of scientists, it is clear they have no direct-experience of otherworldly dimensions, therefore, are understandably confused about Tree-Sentience, and although the evidence is clear as daylight, they refute stating the Trees do not have ‘Intention’, although biological beings operate based on ‘Intention’, whether unconscious or conscious. If an intention is unconscious, then it has been evolved – which means over generations the being has intentionally evolved it.

As humans realize the truth about the nature of reality, live in harmony with the Holy Trees, they shall be able to achieve in their collective evolution, transcendence of their consciousness, beyond their physical bodies, and shall receive communications and wisdom from the Holy Trees.