Was “Haoma”, as mentioned in the Avesta, compared with “Soma” of Vedas, was “Ayahuasca”, the Holy Medicine? 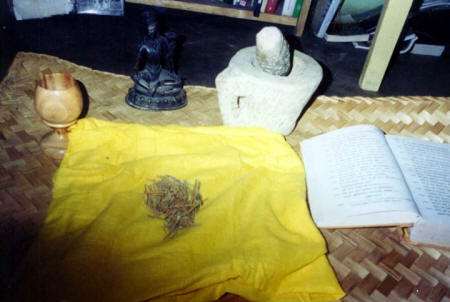 “Haoma” in Avesta, the Corpus Sacred Holy Book of the Zoroastrians, is mentioned as a Plant, the ‘Juice’ of the Plant, as well as a ‘Deity’.

Holy “Haoma” as mentioned in the Avesta

Over the years, many scholars over centuries have noted the striking similarities between the mythology of the Ancient Holy “Soma” and the “Haoma”.

The evidence suggests that the “Soma” and “Haoma” have a common origin in the geographical region of Turkmenistan, Iran and Afghanistan, even though there are several significant differences in cultures of Ancient Zoroastrian Iran and Vedic India.

THOMPSON (2007:67) notes that Indo-Iranians did not inherit “Soma” traditions from their Indian linguistic ancestors, but may have acquired it in Central Asia. He also observes that the original name for “Soma” was Amsu/Asu, which seems to be borrowed from Central Asian substrate language. On the basis of linguistic and archaeological evidence, PARPOLA (1997a:370) proposes that the Rituals related to “Haoma” has been adopted by the Zoroastrianism from earlier Bronze Age religion of Central Asia and eastern Iran, and that the Traditions of Indra and “Soma” were adopted by what he considers as third wave of first Indo-Aryan speakers who occupied the Bactria Margiana Achaological Complex (BMAC) in Turkmenistan from 1750-1500 BCE. HUTTER (1996:196ff) discusses textual evidence in Zoroastrian traditions of “Haoma” tradition prior to Zarathustra, especially among the Haomavarga (“Haoma”-swilling) Scythians. WITZEL (2004:594-597) similarly maintains that the myth of Indra and “Haoma” and / or “Soma” were probably acquired as components of Rgvedic traditions from around 2000 BCE in the southern part of Western Central Asia, close to the mountains Muzh Tagh Ata.

“Haoma” drinking was central to the cult of Mithra in the latter half of the 1st millennium BCE in Central Asia, a culture which was particularly popular with military and soldiers. “Haoma” was drunk at Mithraic festivals and in Persepolis in Iran in in the Achaemenid period at least from the time of Xerxes (Bowman 1970:8ff.) However, by the time that the Sasanian Clergy translated the Avesta into Pahlavi, around 350 CE, the meaning of “Haoma” texts seemed to have become matter of speculations for Zoroastrians, as they seemed to have been unaware that “Haoma” was intoxicating, which had induced madha (intoxication). By 9th Century, the term “Haoma”, also called “Hom”, simply designated a non-intoxicating Plant consumed in daily Yasna rites (FLATTERY and SCHWARZ 1989:13-14).

The Rituals associated with ”Haoma”

Contemporary practices, which emulate ancient performance, prayers from particular chapters of the Avesta are recited to the golden “Haoma” Plant, who is ‘the Sage’ and the guardian spirit of Zarathustra. The “Haoma” ritual includes both preparation and drinking of “Haoma”, which is a part of a longer 2.5 hours daily ritual performed by two priests, where the priests drink filtered Parahaoma (Parahom), which is a mixture of consecrated water and the ‘Juice’, or essence of both the “Haoma” Plant and pomegranate twigs. The “essence” (or ‘Juice’) is extracted from three twigs of “Hom” and pomegranate twigs using traditional method of pounding with mortar and pestle. The requisite items for the performance of Yasna of the “Haoma” ritual are: “Haoma”, Sacred Bread (dron), consecrated water, pure water, fresh milk, a pomegranate twig, mortar and pestle, fragrant wood, frankincense, a fire, and a bundle of metal wires (which was a bundle of twigs from a. Tree in former times), known as barsom, whose ceremony is particularly important in the tradition. The ritual is to be performed continuously until the time of the ‘last judgment’, when evil will be defeated. SKJAERVO (2011:34) characterizes the Yasna as the ritual re-creation of the world.

In Zoroastrian practice, for many centuries in both India and Iran, the Ephedra Plant has been provided, which is a mild stimulant, as “Haoma”. Although there are alternative theories to that of Ephedra, most scholars of Zoroastrianism are of the opinion that Ephedra was the ‘original’ “Haoma”. Parsis/Parsees in Mumbai, an ethnoreligious group of the Indian subcontinent whose religion is Zoroastrianism, used to import Ephedra from Iran, but now have no supplies. A century ago, Ephedra was imported from Iran into Mumbai, where “Haoma” was ritually washed and purified and stored for up to thirteen months prior to engagement in any Ceremony, so that impurities accumulated on the journey from Persia could dissipate (MODI 1922:305). Due to lack of supplies, ‘substitutes’ were now engaged. FLATTERY and SCHWARZ (1989:45) suggested that what is referred to generally as “Haoma” is now a substitute for what may have been engaged in rituals in Iran in the past. However, STAAL (2008:29) believes that substitutes have always been engaged in the rituals.

In the Sufi traditions, which first emerged in the Muslim world, principally in Syria, Iraq and Iran, in the 11th Century, and became more organised in sects in 12th and 14th centuries, there is tradition of mysticism – in fact it is considered as the ‘mystical’ side of Islam. It has been reported that Sufi’s participate in “Haoma’ rituals, where Entheogenic concoction is consumed, which is called “Hom”, which has the same effect as the Holy Medicine of the Holy and Divine Mother Ayahuasca.

This provides evidence of a living Entheogenic culture in a region where people are believed to have consumed “Haoma” 3,500 years ago.

One of the ingredients with the Holy “Haoma” Medicine was the Syrian Rue, which is known as a Monoamine Oxidase Inhibitor (MAOI), and as per the Entheogen Review (Winter 1992, DEKORNE et al. 2002:126), ‘Sufi Ayahuasca… The Soma of the Aryans?’ the other Plant mixed with the Syrian Rue was the Giant Reed Arundo Donax, which is also widely distributed in India, which contains DMT in some of the varieties. The admixture of DMT containing ‘Giant Reed’ with MAOI containing Syrian Rue produces an ‘Analogue’ version of the Holy Medicine of the Holy and Divine Mother Ayahuasca, which is prepared with the Holy Banisteriopsis Caapi Vine, which contains MAOI, and other Plants as admixture, which contains DMT.

A combination of Plants, which were able to provide Entheogenic experience, has been considered as “Haoma” at different times in history, and possibly a combination of MAOI and DMT. The content were not ‘substitute’, rather such WERE “Haoma”, an ‘Analogue’ of the Holy Medicine of the Holy and Divine Mother Ayahuasca.

Therefore, “Haoma” was indeed the Holy Medicine of the Holy and Divine Mother Ayahuasca.