Was “Kykeon” a Greek version of “Ayahuasca”, the Holy Medicine? 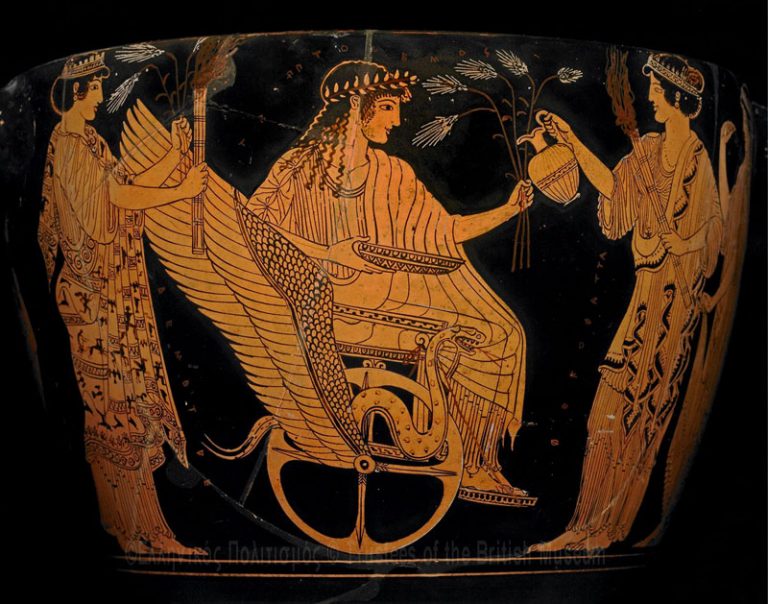 Kykeon means ‘mixed potion’ in Greek. Strictly speaking, “Kykeon” means ‘that which is mixed again’, i.e. to stir up sediment possibly from the bottom of a dispensing container. It has been noted by experts and researchers that the Holy Kykeon was such ‘Wine’ of the Mystery traditions, which produced ecstasy, terror and visions.

Researchers and historians have proposed that the Holy Kykeon may have been Opium Poppy, Syrian Rue, Alcohol or Entheogens in the form of Psilocybin, the Holy Fly-Agaric Mushroom, or the Holy Ergot Fungus, which is similar to the propositions by scholars and researchers with the Holy Soma from the Ancient India.

Was the Holy Kykeon a ‘Wine’, or based on the Holy Ergot Fungus?

The hypothesis involving the Holy Ergot Fungus and the Holy Kykeon was first proposed by WASSON et al. in 1978, which was revisited by VALENCIC (1994), Webster et al. (2000), and SAMORINI (2000). Although VALENCIC was sceptical of the hypothesis, raising pertinent objections, WEBSTER and SAMORINI supported the hypothesis.

HOFMANN’s second hypotheses was that the more common species of the Holy Ergot Fungus, the Claviceps Purpurea, which infests all graminaceous Plants, whose Psychoactive alkaloids were water soluble after grinding, was the source of the Holy Kykeon mixture. According to HOFMANN, this variety did not possess debilitating toxins present in other varieties.

In Ancient Greece, Wild Ryegrass, which was widely available in the Mediterranean region, and also barley, were well known hosts of the Holy Ergot Fungus of the Claviceps Purpurea. The Holy Ergot Fungus in Greek was called “Erysibe”, a name of ‘Demeter’, the Greek Goddess of Agriculture, meaning a kind of ‘rust’, named due to the appearance of the tiny red/orange Holy Ergot Fungi.

RUCK (WASSON, et al. 1978:115) mentions that both rye and barley were potential hosts of the Holy Ergot Fungus and provided several references from classical sources including ARISTOTLE, THEOPHRASTUS, OVID, and PLINY that Wild Ryegrass (Aira) infected with the Holy Ergot Fungus can cause heaviness, vertigo and hallucinations too, and the Plant was referred to as the ‘Plant of Frenzy’.

However, SAMORINI (2000:41) as well as HOFMANN maintains that some strains of the Holy Ergot Fungus does not contain any alkaloids, and others produce only ‘toxic’ alkaloids, and that in some instances only non-debilitating Psychoactive alkaloids.

SAMORINI also notes that intoxication can be “clean” without any negative physical effect in references to intoxication from the Holy Ergot Fungus. This experience was based on the roots of the Plant Securidaca Longipedunculata, which was catered by the Balanta people of Guinea Bissau, and the Balansia Cyperi species of the Holy Ergot Fungus from the Amazons. The Plant Securidaca Longipedunculata, native to West and South-West Africa, locally known as “Tchunfki”, plays a Medicinal role for treating rheumatism, fever, headache, bough, toothache, inflammatory conditions, snake-bite. Balanta people of Guinea Bissau consumed the roots in religious rites for Psychotropic effects, which contained alkaloids of the Holy Ergot Fungus, including elymoclavine, dehydroelymoclavine and newly discovered Ergoline alkaloid. However, the Holy Ergot Fungus only infest the roots of the Plant Securidaca Longipedunculata and which is also toxic, and was considered by the tribes as weapon to kill, commit suicide and more. Therefore, due to the potential toxicity of the Plant, it seems very unlikely that the hypothesis is true that this or any similar specie of Holy Ergot Fungus has been the basis of the Holy Kykeon.

PLOWMAN et al. (1990) reports on the consumption of Sedges (Cyperus Articulates and Cyperus Prolixus) infected with the Holy Ergot Fungus (Balansia Cyperi) which mostly served as Medicine for the Amazonians for abortion, contraception, curing baldness, vascoconstriction, gastric complaints, calming anger, as stimulant, for magic, as hallucinogen, and as an admixture to the Holy Medicine of the Holy and Divine Mother Ayahuasca.

However, Sedges is best known for being a contraceptive in the Amazons, and there is yet to be any report of any ethnographer doing a bioassay during consumption of Sedges. Also, since it was used for contraception and abortion, there should have been indication that any Greek women were screeded for pregnancy who participated in the Mystery Rites, of which there were none. Therefore, there seems to be very slim evidence that this Holy Ergot Fungus has been the basis of the Holy Kykeon.

There have been attempts and reports of self-experimentations with other species of the Holy Ergot Fungus, or a certain alkaloid of the Holy Ergot Fungus, which although at times produced LSD-like experiences were accompanied by strong and debilitating side-effects, including tiredness, leg cramps, uncontrolled motor skills, nausea, drowsiness torpor, etc. If consumed for long term such was deemed capable of causing cumulative negative effects on one’s health and cause blood vessel damage. (ThePsychonaut.org 2013:4-5). There have been reports too which were of sensation of mental emptiness, and meaninglessness of the outer world and enhanced sense of hearing and not unpleasant physical lassitude.

There was even attempt at extracting the alkaloids. Given there is well-known potentially debilitating effect form the consumption of raw Holy Ergot Fungus, some have attempted to extract Ergonovine and Methylergonovine from the Claviceps Purpurea species of the Holy Ergot Fungus, however this did not prevent the uptake of the toxic ergopeptide alkaloids, specifically ergotoxine and ergotamine.

Some have reported they were able to have powerful trip from the ‘extracted’ version of a ‘Potion’, however, it is unknown how it would have been possible for Hierophant in Greech and his team in Ancient Greeks to extract by non-chemical means the desired alkaloids from Claviceps Purpurea specie of the Holy Ergot Fungus without making the Holy Kykeon toxic.

WEBSTER and PERRINE proposed that Greeks may have used ash, containing potassium, which would cause the ‘Drink’ to be infused with potassium carbonate which would have eliminated toxic alkaloids, through process of partial hydrolysis. PERRINE also suggested that to not make the ‘Drink’ too caustic, they would leave the ‘Drink’ to stand for a few days to absorb enough oxygen to turn into potassium bicarbonate or use either wine or vinegar which could have neutralized the ashes. They provided technical description how the process can work. Nevertheless, anybody has yet to follow this chemical protocol and consumed the drink, which no one ever did simply because it could be fatal. Moreover, despite the ingenuity of the solutions to the problems of toxicity, even if the chemistry were to work successfully, the Entheogenic experience from the reports by the Eleusis initiates does not seem like something which would be comparable with this experience. And, if it was that easy to make the Holy Kykeon in such manner, why has no one ever tried it yet?

Was the Holy Kykeon prepared with. The Holy Fly-Agaric Mushroom?

RUCK further suggested later that although ‘major’ rites were based on the Holy Ergot Fungus, the ‘minor mystery’ rites were based on the Holy Fly-Agaric Mushroom (Amanita Muscaria). However, this proposition has fallen under debate, questioning whether it was even possible for the Holy Fly-Agaric Mushroom to be considered as an Entheogen of Mystery rites, due to negative points such as it is difficult to harvest sufficient quantities of the Holy Fly-Agaric Mushroom by Mystery Rites with up to 2,000 participants, which would have required elaborate organization, which does not appear in any classical source. Moreover, Greece wine was always diluted with 3-4 (but up to twenty) parts of water, which if drunk neat, caused madness, or death. Wine was not distilled as distilling alcohol technique was not discovered until around 1000CE. It indeed seemed, that the ‘Wine’ for Sacral Purposes were invariably infused with Other Plants and/or Drugs, which were more to intoxicating than those for social situations.

Was the Holy Kykeon prepared with the Pennyroyal and Glechon?

The Holy Kykeon is known to have consisted of barley groats, pulverized, in a mortar and pestle, then added to a liquid. In some of the preparations, the grain was soaked in ‘Wine’, honey, milk or oil. Often seasoned with an aromatic Plant, such as “Glechon”, usually identified as Pennyroyal Mint.

However, identification with Pennyroyal with Glechon (or Blechon) could not be certain as several Plants at that time were referred by same ‘Titles’. Also, in ARISTOPHANES’ Peace, the Plant is referred to an aphrodisiac. RUCK doubted this proposition, as Glechon/Blechon, indicated Plants which was improbably Pennyroyal, as the effects were ‘too’ mild.

Is Kykeon comparable with the Holy Drink Soma, from the Ancient India?

Among the epithets in Vedas for the Holy Soma is ‘Amrta’, i.e. food of the Gods; and for the Holy Haoma in Avesta is ‘Duraosa’; and similarly “Kykeon” was also known as nectar and ‘ambrosia’, i.e. food of the Gods. All these epithets refer to overcoming death and achieving immortality, and if taken at face value then, the Holy Kykeon was able to produce near-death (and consequent rebirth) experience. Some scholars disagree about the Entheogenic nature of the Holy Kykeon, and believe the effects arise as ‘natural’ religious frenzy. However, events point incontrovertibly to an Entheogenic experience.

The hints are quite obvious too – the rituals before consuming Holy Kykeon was ‘fasting’ during the day before the Ceremony and seven days of celibacy and purification. There was also specific ‘diet’ to follow. The Holy Kykeon was consumed at the end of the fast, from a small cup or bowl after being dispensed from a vessel called “Kernos”. This ritualistic process is very similar to the Amazonian Sacred Ceremony by shamans to consume the Holy Medicine of the Holy and Divine Mother Ayahuasca.