Why does DMT take people to a place that feels MORE REAL than Reality? 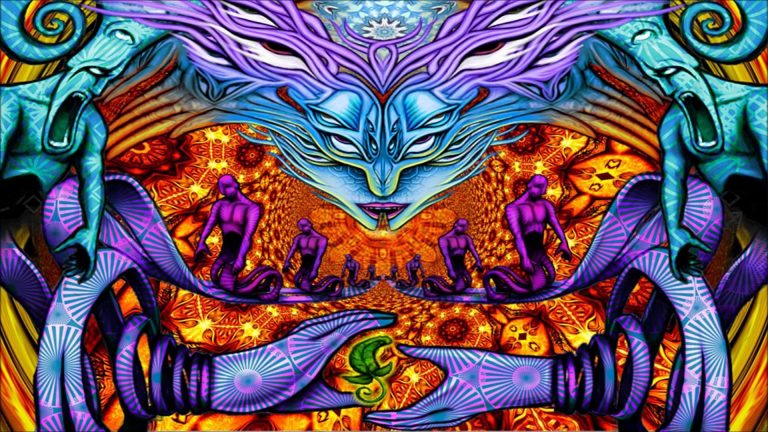 N,N-Dimethyltryptamine, in short DMT, has such an influential and powerful effect on the human brain that it has been called the “God molecule.”

It is well known for being in the Holy Plant Medicine of the Holy and Divine Mother Ayahuasca. DMT induces a transcendent psychological experience. This mystical substance can be smoked or ingested which can provide the individual with profound experiences of altered consciousness, which often feel like near-death experiences, where one may also have encounters with mystical entities, entering into an all-encompassing “new realm” which often seem more REAL than the Reality to many.

So, you may be curious to know how does DMT works and how could it seem more real than reality? Scientists have been searching for the answers to these questions since the 50s, after DMT was found to be Psychedelic by a Hungarian chemist Stephen Szara. In the 1960s, it was found in the human body, suggesting it is synthesized in the pineal gland and lungs. It also naturally occurs in thousands of plants and in every mammal that has been examined so far by modern scientists and researchers.

What do researchers say about DMT?

Most of what we know about DMT now is the result of the groundbreaking research of Rick Strassman on the Psychedelic that he conducted two decades ago. As a psychopharmacologist and psychologist, he started and led the first human research in the United States of America into DMT with his colleague Clifford Qualls between 1990 and 1995. He was interested in looking at DMT as a naturally occurring psychedelic for quite a few reasons, one of them being the mechanism of naturally occurring Spiritual States. For example, as there are states of Near-Death Experiences, Mystical experiences like Enlightenment, or Religious Dreams, as reported by many from time to time, Rick Strassman argued that naturally occurring DMT was also involved in these.

He mentioned, “there are also still a lot of questions to answer, like the explanation for what DMT is doing in the body in the first place. It’s clearly important as it is actively transported into the brain using energy. There are very few compounds that the brain absorbs this way, such as glucose and amino acids that are required for normal brain function, but can’t be made by the body on its own. That makes you wonder if DMT might be involved in the regulation in every day normal consciousness as well,” Strassman said. “And something else that has been discovered over the past few years is that the enzyme and the gene that synthesise DMT are quite active in the retina. So, it could be that DMT is regulating a visual perception in particular as well as regulation of consciousness.“

In 2010 James Kent published a book ‘Psychedelic Information Theory: Shamanism in the Age of Reason,’ based on his 20 years of research, where he argues for a more skeptical view and provides some intriguing ideas that examine Strassman‘s view skeptically and deserve to be explored further. He attempts to explain the phenomenology of DMT in terms of its psychological and chemical effects on the brain. Kent offers an analogy of tempering with the software of a computer screen. Small changes in the programming code can drastically alter the output of the screen, such as by producing flickering, blinking, and even recursive fractal patterns. This hardly means that the screen is now receiving signals from another dimension. Even small disruptions can produce chaos. According to him the same effects may happen in the human visual system. That is, DMT alters the way our visual system processes existing inputs, and hence there is no reason to assume that DMT opens an input channel into another universe. He further mentions that psychedelics hyperactivate what he calls the imaginal workspace. During dreaming the imaginal workspace is extremely active and usually is mistaken as reality. Psychedelics influence the sensory inputs and make them so overloaded that it becomes difficult to distinguish between input from the real world and input from the imaginal workspace.

Recently in 2019, Christopher Timmermann, a Ph.D. student at Imperial College London, conducted a study. This recent study was based on a small group of 13 adults who were given a DMT dose that resulted in about a 20-minute experience. When the experience peaked around two to three minutes, the subjects reported feeling as if they entered a “different reality or dimension.” While the subjects were experiencing altered states of consciousness, the scientists collected EEG readings of their brain activity. Finally, the team was able to summarize the DMT experience into interactions between four different kinds of brain waves that are usually observed during various states of consciousness, like waking or sleeping. They are:-

Timmermann further explains that the team saw large decreases in higher frequency alpha waves and another big increase in the low-frequency delta and theta waves while their subjects on DMT. These effects are strongly related to hallucinations. According to him, that’s specifically intriguing because “these effects are similar to what we see when people are dreaming.“

DMT is closely related with spirituality and death

“When our individual life force enters our fetal body, the moment in which we become truly human, it passes through pineal and triggers the first primordial flood of DMT. Later, at birth, the pineal releases more DMT. As we die, the life-force leaves the body through the pineal gland, releasing another flood of this psychedelic spirit molecule.“
– Rick Strassman. DMT: The Spirit Molecule.

Ancient people all over the world discovered the link between DMT and spirituality without any modern research. For example, the ancient Yogic culture of India had recognized the area of pineal gland as the “Third Eye”, and they designed various breathing techniques, meditation methods, and rituals targeting to open up the Third Eye to experience the trance of DMT which is referred to as Samadhi. Only broad understanding of the DMT in our pineal gland can lead to these techniques and meditation methods.

Deeper understanding of DMT and its usages were developed not only in India but also can be observed in the other side of the world. Amazonians have been using Holy Plant Medicine of the Holy and Divine Mother Ayahuasca, for thousands of years, which is brewed by a combination of Holy Plants containing Dimethyltryptamine and Monoamine Oxidase Inhibitors (MAOIs). This complex Alchemical and mystical Holy Medicine could only have resulted from a deeper understanding of how DMT interacts in the human body. And it is not surprising that many Amazonian religions have been practiced around this mystical Holy Medicine. The Holy and Divine Mother Ayahuasca and Her Holy Medicine is also often referred to as the ‘Vine of the Dead,’ and communities in the Amazons believe that drinking the Holy Medicine of the Holy and Divine Mother Ayahuasca provides one access to the world of the Dead.

According to Strassman there are a number of ways scientists could test whether DMT is present in the experience of near death. For example, you could ask someone who already had a near-death experience to take DMT and then ask them if both experiences are the same. Strassman also said that he had a few emails from the people who have described both the experiences to be very similar. He also suggested that there are some unpublished data which indicates DMT level increases in the brain of dying animals.

So, why does it feel more real than reality?

Anil Seth in one of his Ted talks, suggested, “If hallucination is a kind of uncontrolled perception, then perception right here and right now is also a kind of hallucination, but a controlled hallucination in which the brain’s predictions are being reined in by sensory information from the world. In fact, we’re all hallucinating all the time, including right now. It’s just that when we agree about our hallucinations, we call that reality.“

Research has yet to discover the reasons for the presence of DMT in human body – which may be considered mystical. However, it must obviously be serving some purpose. In many spiritual Traditions, reality is considered as an illusion or Maya. So, maybe through DMT, as one experiences the subconscious world consciously, one experiences the origin of reality- which is why it may seem more real than reality. It is possible that there is DMT in the human body to explore various aspects of consciousness which is still mysterious to most of the scientists but have been used by Mystics for ages to explore and gain knowledge and wisdom from Spiritual Dimensions. As Modern Quantum Physics findings suggest, the origin of reality is from a certain randomness, which could be beyond the scope of cognizance by human beings. So much so has this belief been held true, that some scientists and researchers have recently been claiming that the consensual reality itself is an ‘illusion’, just as many ancient Spiritual Traditions and Wisdom had suggested in the past. Therefore, it is worth researching the Holy Spirit molecule, and the Spiritual Experiences which is gained with a more open-mind, which may surely lead humanity to achieve a greater understanding of human consciousness, its origins and purpose, and about the truth of ‘Reality’ itself.