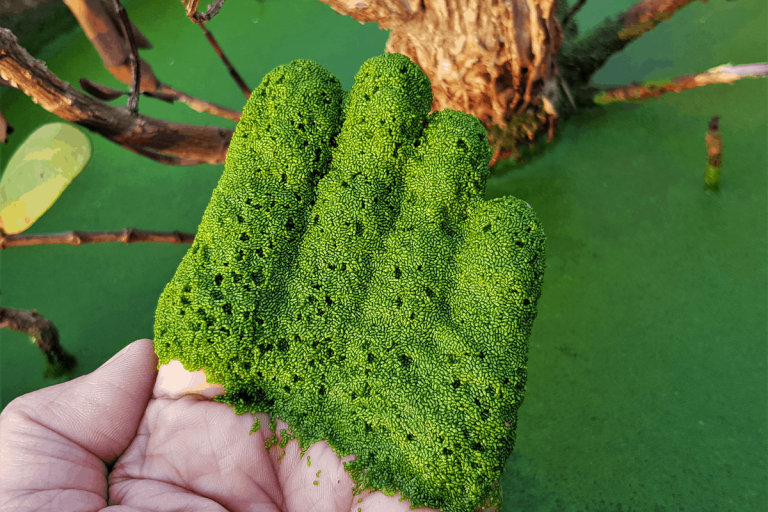 Climate change is one of the biggest challenges of our times. Scientists all over the world, from various fields, are dedicating their time and efforts to understand this phenomenon which is threatening the lives and livelihoods of billions of people worldwide. Natural disasters, environmental degradation and extreme weather patterns disrupting harvests, depleting fisheries, eroding livelihoods and spurring infectious diseases, all of these and many more challenges are originating from climate change.

Wolffia commonly known as Duckweed is one of the most unique Plants in the world. Though the Plant itself seems simple, some of the features of this Plant have puzzled scientists for many years. Wolffia Plants are like tiny green dots—about the size of a pinhead, without roots, known as ‘floating Plants’. When they reproduces, a new Plant grows alongside the parent Plant and then buds off — it takes less than 24 hours to produce a whole new Plant. Scientists believe such fast growth rates may provide an important food source, which tastes like watercress or spinach which already plays a role in Asian cuisine.

According to scientists, this is the fastest-growing Plant known to humans, but the genetics underlying the strange little Plant’s success has long been a mystery for scientists. Now, thanks to advances in genome sequencing, researchers are learning what makes the Plant unique and, in the process, are discovering some fundamental principles of Plant biology and growth.

Recently research conducted by scientists from the Salk Institute for Biological Studies is providing new findings of this Plant’s genome which explain how the Plant is able to grow so fast. The research published this year will help scientists understand how Plants, in general, make trade-off decisions between growth and other functions, such as longevity, defending themselves from pests and putting down roots.

According to Todd Michael, a research professor in Salk’s Plant Molecular and Cellular Biology Laboratory, and the lead author of the paper, over the years simple organisms like yeast, bacteria, and worms contributed revolutionary knowledge in the advancement of science. And the idea here is the same, that we can use an absolutely minimal Plant, like Wolffia, to deeply understand the fundamental mechanisms of what makes a Plant a Plant in the first place.

The Plant grows in fresh water on every continent, except Antarctica, which looks like tiny floating green seeds. It has no roots and the whole Plant is just a single fused stem-leaf structure called a frond. The reproduction mechanism of this Plant is similar to yeast, exactly when a daughter Plant buds off from the mother Plant. With a doubling time of as little as 24 hours. Some experts believe Wolffia may become an important source of protein for feeding Earth’s growing population in the future. As Wolffia has already been consumed in parts of Southeast Asia, where Wolffia is called “Khai-Nam” which translates as “water eggs.”

The researchers enabled the Plants to grow under light and dark cycles to understand what adjustments in Wolffia’s genome account for the rapid growth, then analyzed them to determine which genes were active at different times of the day. According to scientists, most Plants’ growth is regulated by the light and dark cycle, where the majority of growth takes place in the early morning. And surprisingly, compared to other Plants, Wolffia only has half the number of genes which are regulated by light and dark cycles. Michael suggests that this is the reason why Wolffia grows so fast because, due to not having the regulations regarding when to grow.

The researchers found that the Plant has no genes which are associated with other important elements of Plants behaviour such as defence systems, and root growth. According to scientists, this Plant has shed most of the genes which a Plant should have – but Wolffia seems to have evolved to focus only on uncontrolled fast growth.

The Implication of the Study

The study has implications for designing new Plants which are optimized for specific functions, such as increased carbon storage to help address climate change. Accumulated data about the Wolffia genome can also provide important insight into the interplay between how Plants develop their body and how they grow. Understanding this decision-making process holds promise for becoming a new lab model for studying the central characteristics of Plant behaviour and understanding how genes contribute to different biological activities.

Currently, one focus of Michael’s lab is learning how to generate new Plants from the ground up to be optimized for certain behaviours. The current study expands knowledge of basic Plant biology and offers the potential for improving crops and agriculture.

This research is also contributing to an approach pioneered by Salk’s Harnessing Plants Initiative—now scientists can optimize the genome of the Plants to help address the threat of climate change by making Plants better able to store carbon in their roots from the atmosphere.

The team’s overall goal is to create next-generation Plants with special characteristics to combat climate change and food scarcity. This means that the current study may help scientists genetically alter other Plants to have deeper root systems which can store more carbon. This work could help them understand the biological pathways for achieving a rapid growth rate, potentially helping crops grow faster and capture more carbon dioxide from the atmosphere.