Songs of the Trees: The Holy Icaros / Ikaros 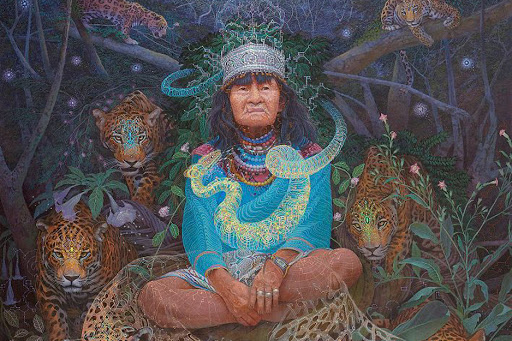 It is common in the Sacred Ceremonies, especially those held in the Amazons, for Shamans to sing ‘Songs’ which may appear as unique and uncommon to the Western or Asian person. These special Holy ‘Songs’ are called the Icaros, or Ikaros (in Quechuan), which have certain ‘Way’ of reaching the Heart of the participants in a Sacred Ceremony.

The Holy Icaros are Holy ‘Songs’ taught Directly by the Holy Trees to the Shamans throughout history during Sacred Ceremonies.

The Holy Icaros are integral part of Healing received from a Sacred Ceremony, and words cannot suffice to properly describe the intangible power of the Holy Icaros. They are like ‘Magical Spells’, and have been used throughout history, often known by other ‘terms’ like mantra. Many spiritual traditions around the world have mantras, similar to the Holy Icaros, which are considered as secret or protected sound.

A Shaman can learn Holy Icaros as a lineage of earlier Shamans, or the Holy Icaro can be taught Directly to a Shaman during a Sacred Ceremony.

Holy Icaros may be passed down from master Shaman to student, and can be ‘Sung’ in different native dialects and tongues, as well as in Spanish. However, the Holy Icaros which are received from the Holy Plant directly are considered most effective than those learnt from a traditional master or teacher.

A Shaman is often measured for experience by how many Holy Icaros he/she can ‘Sing’, which can often be in hundreds. Due to the complexity of techniques required to learn a Holy Icaro, it can take years for a Shaman to learn the Holy Icaros from a human teacher.

Since the Holy Icaros are also taught Directly by Holy Plants, each Shaman may have their own set of Holy Icaros. Traditionally, the Amazonian Shamans believe each animal, tree and stone have lives of their own, and therefore there is a Holy Icaro which is uniquely for them.

The Holy Icaros are received by the human ear as melodies, however they are much more – they are an expression of otherworldly energy channeled by the recipient of the Holy Icaros. The shaman makes themselves open and empty for the spiritual energies to take over, and express as wavelengths, detected as sound.

Within the Holy Icaros are information, instruction and communications from spiritual realms which remains beyond any musicological explanation, with otherworldly vibrations communicating and resonating with the energetic body of the target. The soul can realign, thereafter, according to the blueprint which the Holy Icaro lays out.

The Holy Icaros are dynamic, and often spontaneous, which can heal, protect, cause manipulation of energy to provide healing for the patient/participant in the Sacred Ceremony. The Holy Icaros can communicate energies of elemental forces, create otherworldly realms and landscapes, induce specific feelings, and manifest animal and plant spirits and deities as allies.

During Singing of the Holy Icaros, the shaman can spiritually transform into entities channeled, losing their egos, entering into state of trance and flow with the ‘Source of the Holy Icaro’. As different shamans can access different frequencies for these energy transmissions, the healing varies in distinct quality accordingly.

The 3 main effects of the Holy Icaros in Sacred Ceremonies

There are three main functions for ‘Singing’ Holy Icaros:

Impacts of the Holy Icaros during a Sacred Ceremony

There can be many categories under which the Holy Icaros can be categorised under. Some standard categories are:

Negative Use of Holy Icaros

There are Sorcerers who use the Holy Icaros to cause harm upon others by singing Holy Icaros in a negative fashion, either to cause harm (dano), bring misfortune, illness, or ever death to their enemies or to people they may be seeking revenge against.

The Holy Icaros are traditionally sung without any instruments or with shaking of shacapa, leaf-bundle rattle. In modern times shamans have been using other musical equipment including variety of drums, panpipes, maracas, harmonica, stringed instruments, with new singing styles.

These new format of singing the Holy Icaros, with or without being accompanied by modern musical instruments, cannot be comparable with traditional Holy Icaros, which are taught by the Holy Plants, and connects with spirit dimensions. Although, these modern renditions are introducing Holy Icaros to the worldwide audience, but not in original formats.

The actual Holy Icaros, are not music, they are ‘Communications’, which must be ‘intended’ as so, before ‘sung’. Without the essence of the purpose and reasons behind ‘singing’ the Holy Icaros, the art will be lost. With growing lack of interest among the new generation, who are losing interest in continuing the legacy of shamans by becoming apprentice – either because they find the process too difficult, as they must adhere to strict diet and abstinences or because they are more interested learning quickly from books – whatever may be the reason, the signing of Holy Icaros with the original essence may be fading away with time.

However, the growing global interest in the Holy Medicine of the Holy and Divine Mother Ayahuasca provides the hope as the tourists are driving demand for shamans and helping shamanism thrive by bringing shamans economic prosperity to continue their ‘art’. As, by the blessings of the Holy and Divine Mother Ayahuasca, the shamans get to earn more from the tourists and growing demand on the Holy Medicine, the youth to some degree are eventually becoming interested to pursue shamanism as career prospects.

The Holy Icaros play a vital role in Healing during Sacred Ceremonies where the Holy Medicine is consumed to meet the Holy and Divine Mother Ayahuasca.

Listening o the Holy Icaros can be heart lightening and have phenomenal and hidden positive impact on the listener especially since the Holy Icaros have been taught Directly by the Holy Plants, containing mystical, spiritual communications and tremendous healing potential.

You can Listen to some of the Holy Icaros digitally, which were available in YouTube, Spotify and other sources (accessed in May, 2021).