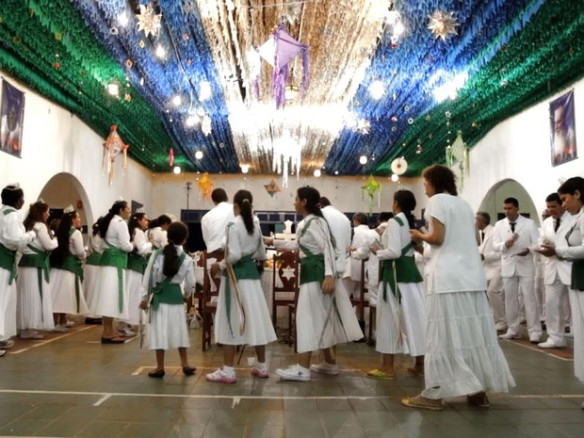 Over the last two decades, around 43 countries, of which 22 in the European Union, have become the hosts of the expanding Brazilian religion called ‘Santo Daime’. The churches of this religion use “Holy Medicine” in their rituals, usually with the Holy Banisteriopsis Caapi Vine together with the Leaves of Psychotria Viridis. The adepts of Santo Daime refer to the Holy Medicine as “Daime,” illustrating how this Holy Medicine is the central organizing principle of the religion as a whole.

Therefore, depending on the geographical location and context, the Holy Medicine has been referred to by different names and is generally considered a Holy Medicine.

Santo Daime church, also known as the Eclectic Center of the Universal Flowing Light, is a spiritual work that targets self-knowledge and the experience of God or the “Superior I Inside.” To accomplish this task, Santo Daime uses, within a ritual context, the Sacramental entheogen beverage recognized as the Holy Medicine re-immersed by Master Irineu as Santo Daime.

The use of the Holy Medicine as a Sacrament seems to have been part of the core religious traditions of ancient times and potentially provided significant visionary basis for many of the most central religions that exist in the world today.

Santo Daime is a liturgical religion, which consists of sharing the Holy Medicine on appropriate dates, that is called Eclectic for its roots are deeply covered in a strong syncretism of various folk, cultural and religious elements. The use of the Holy Medicine as the sacrament is done in the dates of its festivities calendar, following the ritual rules set by both Master Irineu and Padrinho Sebastião.

Santo Daime officially, as it is known today, began seven decades ago. In the history of Acre, the doctrine founded by Raimundo irineu Serra, Mestre Irineu, it is among the most striking and well-known traditions outside the state.

Grandson of slaves, born in Maranhão in 1892, Irineu was attracted to the Amazons for the same reason as many other Brazilians of the time: to make a living in the great economic expansion of rubber. As a rubber tapper and later a member of the territorial guard, he became intimate with the forest – where he came to know the sacred medicinal and visionary drink of the ancient shamans, the Holy and Divine Mother Ayahuasca, known by various Other Names. The Holy Medicine gained another name, Santo Daime, and become the basis of a new Christian doctrine, popular but also esoteric, with a strong influence of the Esoteric Circle of Communion of thought, based in São Paulo.

From the 1930s, when Mestre Irineu started to run his center in Rio Branco, until he died in 1971, Mestre Irineu was highly sought after as a leader, advisor, and curator. Among the people who said they were cured by him was the man whose family would spread the doctrine across the planet: Sebastião Mota de Melo.

Two years after the death of Mestre Irineu, Sebastião Mota de Melo ended up creating his own Daimist center, in his residence, on the outskirts of Rio Branco. Known as Colônia Cinco mil, the land soon gained a large masonry church, which in turn was gaining fame among searchers and walkers from other cities in Brazil, Latin America, and the rest of the planet. Many even chose to live in the Colony. It was here, before moving into the forest, that Padrinho was able to put into practice his ideal of community life. Almost all the members of the Colony adhered to the pact: they sold goods and belongings, as well as handed over cattle and small savings to a common administration fund that started to plan purchases and the work to be developed by all.

Every Daime ritual is thought to be an occasion for learning and healing and for the indoctrination of the spirits existing either in the ” material” or in the “astral” realms. There are many different rituals for different occasions or different requirements. These are called the “hinarios,” or the “healing works,” the “concentrations,” the “masses,” and the “makings”(MacRae 1998:105). They all involve drinking the Holy Medicine and entering into an altered state of consciousness in a social environment designed to contain and guide the “voyages.” Anthropologists, like Couto, have suggested them to be “rituals of order” that encourage group and hierarchical unity and a search for harmony both within and without.

Most of the rituals of Santo Daime are devotional in context. The hymns praise divine principles. Each session begins and ends with regular Christian prayers. There are mainly two kinds of rituals in Santo Daime. One of these are bailados (dances), also known as hinários (hymnals) and the other is concentrações (concentrations). There are other rituals which focus on healing or reciting the rosary. Participants drink the Holy Medicine or Daime in all types of rituals, but the focus and format will differ. Hymnals involve dancing and singing hymns with playing maracas, while concentrations are seated and silent meditations.

Brazil: In Brazil, the Federal Drug Council has always upheld the right of the Santo Daime Churches to practice its healing practices and religion with the Holy Medicine. In 1987, a study was made in which the researchers visited various churches and observed the making of the Holy Medicine, and concluded that the Holy Medicine was a very positive influence in the community, with encouraging social harmony and personal integration. The study also noted that, rather than simply seeing the pharmacological analysis of the plants, it was vital to consider the whole context of the use of the Holy Medicine.

Canada: In June 2017, the Santo Daime Church Céu do Montréal received religious exclusion to use the Holy Medicine as a sacrament in their rituals.

Europe: In the Netherlands, the Santo Daime church won a court case in 2001 that allowed them to their ceremonial usages of the Holy Medicine.

The promoters and supporters of Santo Daime have contributed tremendously to introduce the Holy Medicine to the Western world as well as other parts of the world. The Santo Daime Church has set wonderful examples like rehabilitating prisoners by organising Sacred Ceremonies for them in Brazil, some of whom have had tough experiences in life, and had their lives transformed.